Citizens Explain ‘Athens in Our Lifetimes’

You probably first heard of Grady Thrasher and Kathy Prescott when they stood up to every establishment in Athens—local government, university, business—and opposed what came to be known as the “bio-terror lab,” a maximum-security U.S. government installation for the study of virulent pathogens, to be located along the North Oconee River adjacent to the State Botanical Garden—laboratories so secure that “nothing could go wrong.” Another site in another state was eventually picked for the lab, but not before Grady and Kathy had proven themselves indefatigable opponents very effective in rallying public opinion. At the very least they showed the bio terror selection committee that Athens did not stand with open arms waiting to host their bugs, as all our establishments had assured we would be.

During that fight, Kathy and Grady joined forces with another passionate bio-terror opponent, Matt DeGennaro, who also turned out to be a filmmaker. After they shooed the bugs away, they joined forces for lighter fare, The World’s Smallest Airport, a delightful film about Grady’s father and uncles and their flying circus right after World War II, using the skills they learned as pilots to perform at airshows all over this region and landing their plane on a platform atop a speeding 1947 Ford, the smallest of airports, indeed.

Kathy grew up here, too; she and Grady met after he retired from his successful law practice in Atlanta and she was back here continuing her career as an artist. Out of their shared love of Athens and their fascination with its change over time from a conservative Southern town to the more diverse village we know now, they conceived another film, Athens in Our Lifetimes, with Matt as chief cinematographer, of course. 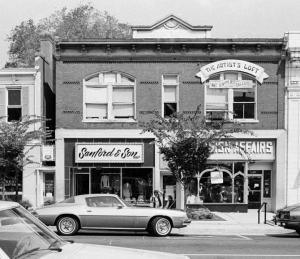 In their typically thorough approach, they have spent the last two years interviewing Athenians and searching for archival footage to document 1960s Athens and to show how we morphed into the multifaceted city we know today. Ciné hosts the world premiere of Athens in Our Lifetimes on Wednesday, Apr. 26, a gala, catered affair with all available seats occupied by the people who appear in the film and others connected with its making. After that, Ciné will show Athens in Our Lifetimes free for a week, beginning May 5. Mark your calendar so that you’ll be sure to see this fascinating film that delves into the question that intrigues everybody who has spent time here: How did Athens get to be this way? What makes Athens Athens?

Grady and Kathy, aka Sunnybank Films, don’t just sit around and speculate. They go out and ask 50 or so people who have lived through some or all of the changes that Athens has experienced during the last six decades or so. Of course, the answers vary widely, but the general consensus among all these people viewing it from their many different angles is that Athens has a special quality in spite of constant pressures to make our town ordinary, typical and, well, dull.

The film involves a lot of people talking about Athens, so if you can’t stand a movie without car chases, maybe you’d better ease out to the quadriplex, instead. But if you find yourself intrigued by riots, demonstrations, streaking, Panic in the streets and people grappling with trying to define and understand their hometown, make sure you see Athens in Our Lifetimes at Ciné. Kathy and Grady and Matt, with a lot of assistance, have not only given us this documentary that helps us understand our hometown, they have also produced over 200 hours of interviews with Athenians, which they have given to the special collections library at the university, where they are always available to enrich our understanding of Athens.

Athens in Our Lifetimes documents change. Toward the end of the film the camera pans the latest explosion of high-rise, luxury student apartments soon to unleash another thousand Mariettans into downtown Athens, intensifying the pull of Atlanta’s orbit on the indigenous culture that the film explores. Very probably, Athens in Our Lifetimes documents not so much how we are but how we were, as other lifetimes already inevitably impinge. See it soon and be reminded that even as you watch this intriguing documentary, Athens continues to change behind your back, right outside the theater, and it will not be the same Athens when you step back into it. Neither will you be the same person, because you’ll better understand that your lifetime, too, can matter in Athens.