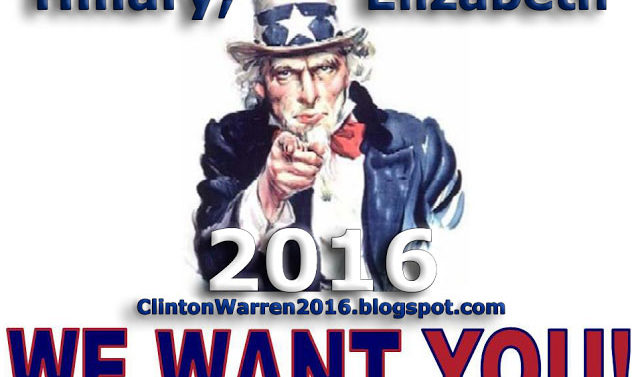 My opinion on national politics is, in the words of my cousin Owen, as useless as tits on a boar hog—i.e. slightly less useful than my opinions on local politics. Nevertheless, occasionally one has to say something, just to get rid of it.

They’re such a perfect match that it will never happen, but the dynamic duo of Hillary Clinton and Elizabeth Warren—call them Hillizabeth Warrenton or whatever—would generate more excitement and enthusiasm (and outrage) than any other vice president pick possible. The others under consideration that I have seen would “balance” the ticket in the usual ways but would actually be a drag on it. That guy who used to be governor of, what, Virginia? He sounds like a great governor, especially compared to the last one, whom the court just made the poster child for legal bribery of public officials. But with him on the ticket or Sen. Sherrod Brown or even that guy Cuban, you don’t get that synergistic jolt so evident in Clinton and Warren’s joint appearance last week. Warren has the energy and the cool to attack Trump effectively while letting Clinton relax a little.

I know this sounds just like a Facebook post from your sketchy uncle, but we both know that Warren wouldn’t lose Clinton any voters who already don’t want to vote for a woman, and she would tap into all that wonderful energy Bernie has generated. She’s younger than Hillary and Bernie and represents a new generation; she should be able to attract Bernie’s enthusiastic younger voters.

Sure, I’d hate to see her leave the Senate, especially if she’s followed by a Republican appointee, but Massachusetts will eventually sort that out.

What is the vice presidency? Not worth “a bucket of warm piss,” according to John Nance Garner, who became FDR’s first veep. Lyndon Johnson gave up his powerful position as Senate majority leader to become JFK’s vice president and despised it, but you see how it worked out for him.

I hate to say it, but Warren would give Clinton some cover from all the nutjobs who fantasize about blowing her away with their arsenals. You don’t want a crazy liberal bitch in the White House, big boy?

Look, Frank Underwood gave up his powerful position as House majority leader to become vice president, didn’t he? It wasn’t long before he was president, and now Claire’s running for veep. Or was she elected? Or did she decide to run against Frank? I can’t remember how the season ended.

Anyway, having the leader of the Warren wing as her right-hand woman could give Hillary Clinton a lot of flexibility in campaigning and in operating as president. She could put Warren in charge of some real initiatives, as Bill put her in charge of coming up with a health insurance plan. Yeah. I know. But who’s to say it didn’t pave the way for Obamacare? Maybe Warren can get us the rest of the way.

And then there is, as always, Trump. Nobody so far—especially the 16 feckless Republican candidates who went up against him—has shown the ability to deflate him and bait him into overreactions that Elizabeth Warren has already demonstrated, and she’s just getting started. Warren could in fact be a crucial factor in preventing a Trump victory. She has that same outsider appeal that he cultivates and that is no longer possible for Clinton.

And assuming that this dream team wins, that puts Elizabeth Warren in line to succeed Hillary Clinton in perhaps only four years, but more likely in eight.

Their candidacy seems such an obvious slam dunk that it can’t possibly happen. Clinton will no doubt take the safe shot she has always taken and that has always paid off for her. But this is not always. We have never been here before. This is the time for a swerve outside the box, a curated pivot. “The owl of Minerva spreads its wings only within the falling of the dusk.” We may well be facing the end of our civilization, but we must fight back against the forces of darkness. We can win, but this time it may take two goddesses.