The Ballroom, the Jewish Film Festival, Japanese Magnolias and Bernie 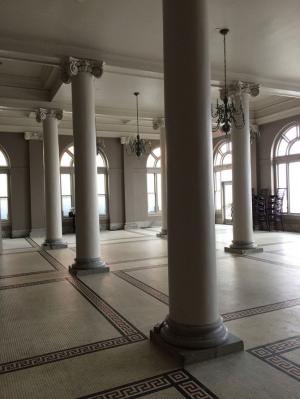 Renovations at the Georgian ballroom have revealed the beautiful tile floor, which had been hidden under carpet for many years.

I stopped by The Georgian the other day to see how they’re coming with the restoration of the ballroom, mindful that they only got started in early February, and they’ve got an April wedding scheduled. As you can see in the picture, the front part of the ballroom has already been brought back. Look at the floor that had been hidden under carpet! I happened to run into Andrew Malec and Zack Brendel, the guys in charge of the restoration, and they showed me the work in progress in the back part, where the ballroom had been broken up into smaller spaces with lowered ceilings that had caused the destruction of some of the columns’ Ionic capitals.

When they’re through bringing it all back to its former glory, the Georgian ballroom will once more be a fine community asset and the scene of many a celebration. How fortunate that South Kitchen + Bar owners Kirby and Stephanie Sims recognized what a jewel they had adjacent to their restaurant and how it could enhance their enterprise.

I cannot recommend too highly the Jewish Film Festival, coming back to Ciné Saturday–Tuesday, Mar. 19–22. I do not know a single one of the films, but each one has been carefully selected by a local committee, and I can guarantee that whatever you see will be well worth the time spent. Anything I have ever seen at this festival in the past has been an excellent film about enduring human values, “Jewish” only in the sense that the Jews have been around a long time all over the world and have a unique perspective from which to show us a thing or two about life.

I can think of no better cinematic indulgence than to splurge on a $45 festival pass and live at Ciné for four days. Even if you can’t see them all, the pass is a bargain. Otherwise, you can buy individual tickets at the box office and take your chances. There’s a gala opening Saturday evening and a closing party Tuesday. Read all about the festival at athensjff.org.

The Bern, Not the Burn

Quick: How is the Bernie Sanders campaign like the Japanese magnolias? Both have dodged killer frost and have flourished as spring arrives. 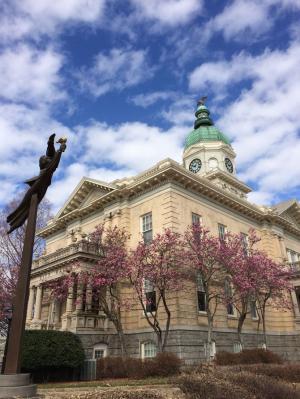 The Japanese magnolias have had a good spring, and so has Bernie.

The magnolias are those glorious pink-hued blossoms that are among the first to appear this time of year, when all too often a late frost burns their beauty. This year, though, their timing was impeccable, and they have brightened the scene all over town. In the picture, you can see the magnolias at City Hall, which always have a better survival rate, because they’re nestled against the east side of the building, protected from the wind.

And Bernie? His timing has been impeccable, too, and he has so far survived efforts to frost him. He strongly represents the long-submerged need to break out from the old politics and do the right thing. We’re constantly told that’s unrealistic and won’t work, but Bernie articulates the urge to let our better natures blossom, ignoring the chilling winds of business as usual.