Feelin’ Groovy: More Reminders of How Great Our Town Is

C. J. Bartunek, who serialized in Flagpole a couple of years ago the beginning of her novel, called then The Athens of Georgia, has recently published online a carefully researched account of an historic dance party on the UGA campus in the spring of 1972. Here’s how it begins: 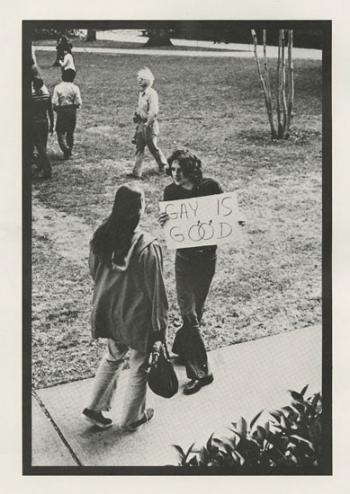 A demonstrator on campus in 1972 publicizes gay rights.

“In the early evening of March 10, 1972, while excited undergraduates prepared for a dance in the student union ballroom of the University of Georgia, a longhaired sophomore in tight pants was standing against the building’s massive front columns, reviewing his band’s set list, when a seedy looking older man laboriously made his way up the steps and startled him. The stranger—with a red face and a comb-over—came bearing a message: The Ku Klux Klan did not approve of the night’s scheduled event.

“Not even its organizers had completely believed this particular dance would take place, and disaster was still quite possible. Forbidding American college students to dance rarely seems like a tenable position, but up to the very day it was scheduled, administrators at the university felt they had not only public opinion but also the law on their side in blocking it. These students didn’t merely want to dance. They wanted to dance with classmates of the same sex, in Memorial Ballroom no less. They wanted to raise awareness of the fledgling Committee on Gay Education, a group that had raised far more awareness already than the university was comfortable with in its three and a half months of existence.”

Read “Dance Revolution ‘72” at thebigroundtable.com and be transported back to those earlier years of the fight on campus and in Athens for the right to be yourself, whoever that might be.

Clarke County School Superintendent Philip Lanoue announced last week that he is leaving to become superintendent of the Fulton County school system. He has done a great job here and was selected as national superintendent of the year in 2015. He obviously could have gone anywhere he chose and is certainly to be admired for taking on another tough assignment.

Since the Lanoue announcement, people around town have been informally nominating their own choices to become the new superintendent, whether or not those so chosen have any idea or inclination, let alone qualifications or chance of appointment.

Nevertheless, and completely without giving him the courtesy of checking with him first, here’s my nominee for Clarke County school superintendent: Bertis Downs. You probably already know Bertis or at least know who he is and what he has accomplished in the workaday world, which undoubtedly demonstrates his ability to function successfully in demanding and high-pressure environments.

But Bertis has also developed into possibly the No. 1 citizen-supporter of our Clarke County public schools. He has used his considerable powers of persuasion and advocacy to raise consciousness here in regard to the importance and the possibilities inherent in our public school system. Bertis is a true believer with an energy level that drives him to do whatever is necessary to assure that his chosen projects succeed—not just for the few but for the many.

Bertis is probably not eligible and surely must lack some requisite degree in educational metrics or something. And he’s probably not interested, but maybe he could be persuaded, if we could find somebody as persuasive as he is.

By the time you read this, Town & Gown’s production of The Graduate may be sold out, and no wonder. It is a delicious, dark bon-bon of a play. No matter how familiar you are with the movie, this production is a whole new experience, with live characters in a lean, quickly moving script that showcases the immediacy live theater brings. In an evening filled with delights, one of the highlights is the music—two local guys off to the side, playing and singing the so-familiar songs that were such an integral part of the movie and carry this production along from scene to scene. In last week’s mention, I omitted Dave Domizi, who ably plays Simon to Michael Wegner’s Garfunkel—or vice-versa.