A Farewell to Harold Williams

We know Harold Williams was special. We know there are some people who are so much at ease with themselves, so confident in their own abilities, so sure of who they are that they don’t fret so much about their own lives. They can be God’s clowns, making other people laugh and forget their troubles. That was Harold: always joking, always serious. He seems in retrospect larger than life, but that doesn’t do him justice. As Rev. Harper said at his funeral: To Harold, it was not about Harold. He just had a part in a big drama that involved a lot of people. God gave him all that musical talent, and he used every bit of it. It made him lifelong friends, and it gave sustenance to a generation.

He played well with others. That’s what makes the music. And when you got next to him, whether onstage, in his office, on the street or at church—he made you play better. So, he was not larger than life. He was just thoroughly alive, and he made you feel livelier, because he knew who you were. He could see past Harold and see you, and his regard made you better. Multiply that by hundreds, and you understand who all those people were who came to his visitation and to his funeral. We were all people who were made better by Harold. 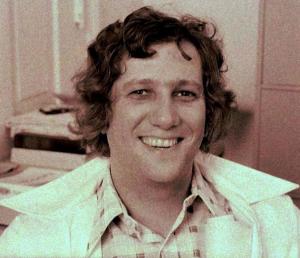 But he was, after all, just Harold, a gregarious musician who trained himself to make a living as an accountant. That was not easy for him. He had to take a happy-go-lucky mind and make it concentrate on facts and numbers. He told me recently that one time, when his musician son Ben was helping him out at the office, Ben finally said, “Dad! How can you stand doing this?” Harold said he told Ben that it wasn’t about the numbers; it was about the people. And all of us who flocked to Williams and Guined for Harold’s help know how he always turned an ordeal into a visit, even when the last minute loomed.

Laura Carter said to me at his funeral that Harold was laid-back and easygoing toward people and accepted them however they were without judging them, but with his music he was Type A: a perfectionist. Everything had to be just right. That’s what good musicians do. They take that magic inside themselves, and through diligent work and practice, they bring that magic out into the world and share it with the rest of us.

Harold was a musician’s musician, and oh, how his friends bade him farewell last Thursday at Covenant Presbyterian Church! They are a generation older than the stalwarts who saw Carl Lindberg off from the UGA Chapel the Sunday before. These are men who played alongside Harold for decades—all-stars, every one: Randall Bramblett on keyboard, Tom Ryan on bass, Davis Causey on guitar, Fred Seagraves on drums, Donny Whitehead and Bill McDonald on sax (oh my!); Randall, Scotty Piotrowski and Clarence Young on vocals. Ben Williams sat in on drums and vocals. Beforehand, Betsy Burmeister played a lively set of hymns and spirituals on the piano with jazzy arrangements. “Harold was always telling me to liven it up,” she said afterward.

Remember, Harold’s daughter Molly (who read a lovely poem) wants to collect all those stories and anecdotes about him, all those ways he impressed himself into our lives. You can help keep Harold alive for all of us. Send your stories and reminiscences to Molly: mpop25@me.com or 130 Plantation Dr., Athens, GA 30605.

Randall said it best Thursday in his bluesy song, backed by the all-stars:

Well, if anyone should be hurting, it shouldn’t be you.
If the world was a fair and just place, your nightmare would be through.
It shakes my faith, and it weighs me down, and I’ll never understand
why such a storm of bad luck came down on a good man.
Prayer flags flying on the garden gate while the gods argue everybody’s fate.
If anyone could make ‘em laugh, it would be you.
What in the world are you thinking about late at night
as the world spins on around you and you’re pinned down tight?
I used to think I was a wise man; now I got no advice.
The only thing I know for sure—it’s a fragile life.
All your friends leave you what they can—their love and their sadness too.
If anyone could make ‘em laugh, it would be you.