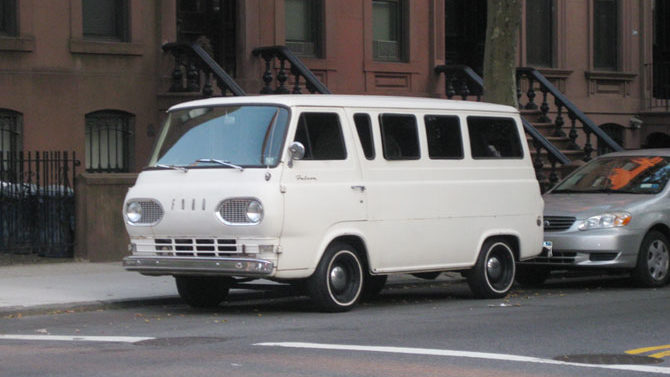 Disposing of an old refrigerator at Flagpole recently reminded me of a similar experience in New York. Burned out with graduate school, I got a job at a real estate firm in the Village.

My first day out on the job, I left the office with a guy named Doug in an old white Ford Econoline van and drove the three blocks to the Chock Full O’ Nuts on 7th Avenue, precursor to today’s coffee shops. In spite of my compulsive apprehension that we were on the clock and supposed to be working, I sat down beside Doug and sipped a coffee and ate a cruller, while expecting our boss to come bursting in before I could see the bottom of my cup. He didn’t, and once Doug decided our coffee break had been fulfilled, we headed out to the top floor of one of the Grove Street properties to change out a refrigerator. Doug’s method of accomplishing this change-out was to remove the (heavy) defunct refrigerator on a dolly to the top of the stairs and give it a push. To my horror and Doug’s cackling, the former refrigerator pounded down the stairs to the landing, scarring banisters, carpets and walls as it plunged. At the landing, the process was repeated until the leaking carcass lay in the foyer, whereupon we grabbed it and escorted it into the van. The replacement refrigerator would be delivered by whatever purveyor had agreed to  a rock-bottom price and perhaps a kickback.

Thus did we use up the day cruising the Village streets with free range among the quaintest, hippest real estate in the city. (I have ever since remembered the mailbox card at one of our addresses that read simply, “Torn Page,” where the actors Rip and Geraldine resided.)

My mind was freed from the shackles of undone work. In the Village I was far from the inquiring intelligences demanding my comparison of Husserl and Heidegger. My spirits lifted; energy returned. Doug’s violent whacking of the Gordian knot trumped Professor Dean’s analyses—he who was later promoted to become Dean Dean, as if he were a character in Catch 22.

Soon, I was swaggering around the Village with free entry all over, from Perry Street to Barrow, Charles to Hudson. Doug drove the old van with an abandon that challenged even the taxi drivers, and I learned to relax and enjoy the ride, rapid and scary though it was and without seat belts.

When we had collected a sufficient number of old stoves and refrigerators, we then had the problem of what to do with them. City dumps would not accept them, and the only legal way to dispose of them was to pay large sums to the city at special landfill pickup points. To avoid those charges, Doug’s plan was to drive into the dump and unload the stuff as fast as we could. I had a better idea. I got in the back of the van, with the appliances between me and the unlatched side door. Doug drove up to the municipal dump, into the front gate and sped toward the dump site. At the last minute, he spun the wheel to the left and shouted, “Kick!” As the side doors flew open, I held onto the van railing and kicked all our surplus kitchen aids out onto the pile that flashed by. As sanitation workers ran after us cursing, Doug floorboarded the old van, and we humped it back out the entrance onto the street and around the corner, where Doug could hardly drive for laughing. I laughed, too.