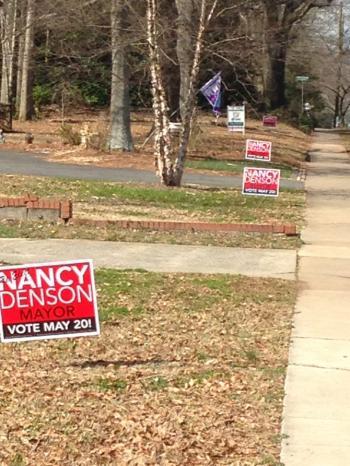 Our mayor has done nothing to make anybody mad; she has done absolutely nothing. That’s why she has only token opposition going into the last few days of qualifying. Barring some mystery candidate, everybody can support Nancy. Everybody can jump on her bandwagon—give her money, put up her yard signs, endorse her. It’s win-win for everybody, especially everybody who might benefit from being a friend of Nancy.

Really, opportunities like this rarely come along in politics. Usually, people who want to be in good with the mayor are forced into an agonizing decision over whom to support, but this way, there is a clean and foolproof choice. You can give your money and your endorsement gladly, because it’s a sure thing. Why don’t we do it this way every election? Those contested races are so hard on everybody, costing so much in effort and money and hurt feelings. This way is just so much better. We could go on and agree right now, say, that one of Nancy’s new best friends on the commission will succeed her, and we won’t have to worry about a mayoral election again for the next 13 years.

We could even pretty much extend this election principle to the commission races. Why, look: We’re practically doing that already this year. Of the five seats up for election, there’s opposition in only two, and by the close of qualifying on Friday, that could well be only one contested seat. Sure, the Republicans messed up and put the contentious Boulevard and Cobbham areas into District 3 and caused a fight there, but we wouldn’t be having that election if the incumbent hadn’t decided not to run again. Overall, the Republicans did a darn good job of creating districts nobody wants to contest.

So, we’re going to have a non-partisan election on May 20 with probably only one contested race, two at most. Of course, there are still a couple of days this week until qualifying closes at noon on Friday, so there can always be surprises, but not likely. And by the time the new government is inaugurated eight months after the election, we will not only have a consensus mayor, but she will have a consensus commission working with her. She will have a majority closely attuned to her common-sense political philosophy, which holds that it’s best for the government not to do anything, because business knows what needs to be done and will do it if left alone.

It’s so simple. No wonder Nancy is so popular. There are already plenty of people who know quite well what is best for Athens and best for themselves, too, and they certainly don’t need the mayor telling them what they can and cannot do; Nancy understands that. Government speaks for the people, and you know how messy the people can be. Business doesn’t need that.

That’s another reason Nancy is so popular. She doesn’t really have a lot of powers as mayor, but one she does have is controlling what goes on the agenda to be considered at commission meetings. If it’s not on the agenda, it won’t be considered. She can avoid so many messy debates and hurt feelings by keeping controversial matters off the agenda.

It’s the best of all possible worlds, and we have the best of all possible mayors. Some of you would still like for your local government to be actively engaged in guiding development downtown, calming traffic on arteries like Prince Avenue, helping to keep the Atlanta Highway viable, etc., but don’t worry. The mayor has a lot of friends, and they know what to do.