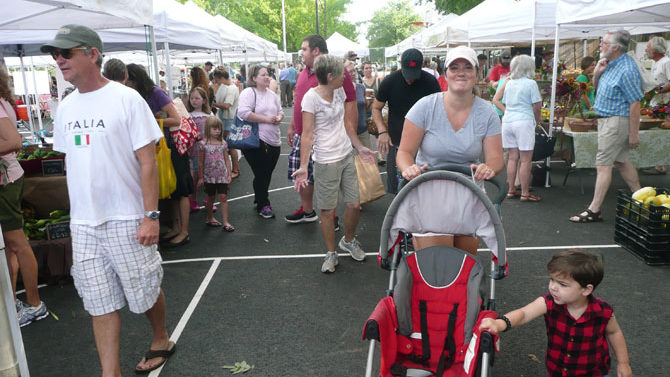 Gay, my wife, has the old wooden mixing bowl her grandmother used. Granny Lily made biscuits twice a day: flour, buttermilk, lard and soda, accented with home-churned butter and homemade blackberry or apple jelly. The smell of buttermilk even now reminds her of Granny Lily, since Gay stood about nose high to the mixing bowl while she watched those biscuits being made and learned how to make them—even without the lard.

Those biscuits fueled a family farm, though even as Gay watched them being made, the main family income was earned off the farm, and that was the trend all over Georgia and all across America, while bread became Wonder Bread, no longer made by hand at home or in local bakeries, and vegetables were trucked in, and meat came in from Kansas City, fortified with hormones.

Our lifetimes have gone from Granny Lily to Archer Daniels Midland, from the independent farm to the factory farm and at the same time from the City Café to Subway. The farm programs that aided the family farmer during the Depression of the 1930s aid corporate profits. For all the reasons we know so well—urbanization, industrialization, globalization—the family farm became obsolete, a weekend hobby, a myth. Farmers, when they existed, were notoriously independent, hard to organize. They weren’t good at politics. They naturally lost out to what came to be defined as “progress.” Progress belonged to the corporations, to the multi-nationals, and as they sucked up government support, they lined their pockets with congressmen and senators happy to take their money. Agriculture became a closed system of mutual interest between agri-corporations and agri-congressmen. It’s the American way, and in the realm of food the system has succeeded with astounding profits, though it can never succeed wildly enough. Today, we read, for instance, that the hogfarm lobby is hard at work to ease the requirements for the lagoons that catch the hog parlor waste that from time to time washes into our water. Less regulation equals more profit.

All of this industrial drama could have gone on forever outside our concern except for the fatal flaw in the corporate model. Corporations are the kind of people (as defined by the court) who just don’t give a damn about human welfare, let alone animal welfare. They want to, and they try, but something just keeps getting in the way. Profits. There’s nothing wrong with profits. I enjoy them occasionally myself. But profits are the lifeblood of the corporations and of their stockholders, and stockholder-driven corporations can do nothing that lessens in any way the profits that drive stock prices. That’s why it is out of the question that an agri-business could grow hogs in any way other than stuffed together by the thousands standing on a platform in the most un-hoglike conditions imaginable. And chickens. And cows. No corporation wants to be mean to animals, it’s just that, you know: stock trumps livestock. Sorry.

And stock trumps bugs. So, we get pesticides and premature picking plus long-distance trucking.

But that’s just half of it. Corporations, God help their souls (Did the Court rule that they have souls?) have to mess with us, too. Pump everything full of sugar and enzymes and fat and carbohydrates and top it all with cheese and bombard us all day on television with those juicy, smokey images until the whole family is clamoring for a Double Big Burger with cheese and fries and a Giant Gulp soda and maybe a piece of whipped cream cheese cake with chocolate, and we’re good to go.

But we’re fat, and diabetic and cancerous, and the government can’t say much about it. Nobody can suggest that some of this may be because of the diet we’re force-fed. The corporations aren’t going to tell us; the medical, insurance, pharmaceutical and hospital industries live off our conditions, and all the cuts to our education make it increasingly difficult for us to figure it out for ourselves. So, we’re treated daily to the barrage of ads for all the foods guaranteed to make us fat and sick, and then we’re bombarded nightly by ads for all the high-priced medicines to control our weight and all the ailments our bad eating has brought us, and we’re instructed to tell our doctor what to prescribe for us so that we don’t have to worry about eating right.

Some people didn’t get the message. Some people kept on farming and figuring out how to grow vegetables without reliance on pesticides, with ingenuity and their own sweat instead of migrant labor with no stockholders demanding their cut: vegetables and meat grown at home and sold near home. And people began to taste the difference in that homegrown food and in home-baked bread and homemade jams and pasta and, yes, music. Music is analogous to farm-grown food, because in spite of the corporatization of American music, people have continued to make it for home consumption, and there’s no question that hearing and seeing a band beats a CD every time. And, as we caught on to the value of fresh food, restaurants sprang up to provide it to us, transformed by chefs who have taught us just how good fresh food can be.

When local farming reached a critical mass, the farmers markets sprang up to bring the producers together with the customers, accompanied by music, of course. Remember that first day over on the other side of the park? The farmers weren’t quite sure it would work. Not a lot of them showed up. But the customers surely did. They bought out everything available, and the word got back to the farms. Since then, at the Athens Farmers Market and all the others there’s plenty of produce and plenty of customers.

And of course those customers initially were those who had the education to understand why diets full of fresh vegetables are good for us and had the money to pay for that better quality and taste. But the farmers and the market managers weren’t content to leave it at that. Early on, they began searching for ways to be more inclusive, to bring in more customers not as familiar with the benefits of fresh food, not as able to pay for it. Then Wholesome Wave Georgia came along, and the partnership was in place. Wholesome Wave Georgia leverages government nutrition programs to double the dollars available for eligible people to spend on fresh food, thus increasing the amount that goes to the farmers for their labors. Every nutrition dollar available becomes two dollars. It is a simple, non-bureaucratic solution that provides money to those who need it to buy fresh food.

This money is our community’s response to the premise that everybody should have access to fresh food. It represents the best kind of partnership among our citizens as customers, our farmers as producers and our government as stimulus—the role the government was supposed to play before it was co-opted by the agri-giants.

Wholesome Wave, the reason we are here this evening, is a focused, no-red-tape accelerator for local food communities. The money we contribute to Wholesome Wave helps local citizens buy good food and helps local farmers raise it. And we all know that there is a multiplier effect above and beyond the dollar amount, because the more we buy and eat fresh food, the more we want. In that sense, Wholesome Wave is an educational institution, teaching through taste how much better fresh food is and through experience how much better it is for our health.

Meanwhile, the majority in the House of Representatives wants to defund the very nutrition programs that form the cornerstone of this partnership. All the more reason to dig in and help this coalition that is bringing us back into touch, literally, with our roots. Nothing is more basic than food, and nothing is simpler and more direct in straightening out our food values than Wholesome Wave, unless Granny Lily could come back.

This Pub Notes contains remarks delivered at Autumn Harvest Feast, the Athens Farmers Market fundraiser for Wholesome Wave Georgia. To support Wholesome Wave Georgia, go to www.wholesomewavegeorgia.org and make a contribution. You will help feed families with good, fresh food and also support the farmers who grew it.