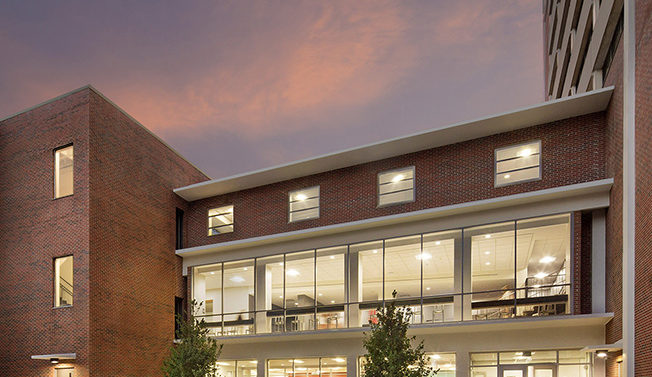 As students and teachers anxiously prepare to return to college campuses during a pandemic, some of them are buzzing about a letter a private dorm operator wrote to the state Board of Regents calling on Georgia State University and other schools not to limit, due to the coronavirus, the number of students staying in dormitories this fall.

The May 29 letter from Corvias Property Management and a resulting memo from state university officials was made public after a records request from Georgia Tech student Kelly ONeal, who shared it on social media. ONeal said she asked for the records in late June to learn whether plans to reopen during the spread of COVID-19 were driven by the school, the state or some other party. She got a response that included the Corvias exchange in late July.

In the letter, Corvias Vice President of Campus Living Chris Wilson said the company objected to potential plans that would limit the numbers of students staying in dormitories, especially at Georgia State University, where Corvias manages nearly 3,500 beds, according to its website.

“We understand the BOR and the nine institutions involved in the Phase 1 Student Housing (agreement) may currently be deliberating alternative plans for the Fall 2020 semester, and we therefore felt it important to communicate directly with you regarding our concerns, as the Concessionaire, regarding certain actions the BOR may be considering at this time,” Wilson wrote.

Georgia State had plans to open its dorms at 75% capacity when it starts classes Aug. 24, which would have caused Corvias to lose $3.1 million over the school year and place the project in default, according to an internal Board of Regents memo prepared in response to the warning letter.

The letter says the Board of Regents will violate its contract with Corvias if it allows any limitations on the number of students in dorms, reduces fees for a shortened semester or prevents or discourages students from living on campus.

ONeal said she wasn’t hunting for a letter from a dorm operator when she asked for records to show how campus reopening plans were negotiated.

The widespread sharing of the Corvias letter this week comes as the first day of classes nears for the 26 University System of Georgia schools and tension grows as students and faculty object to in-person class safety plans of administrators. Thursday the United Campus Workers of Georgia cited the letter in a press release that called for the university system to offer more transparency about financial pressure to take a less cautious approach to COVID-19 guidelines.

In Athens Thursday, dozens of students, faculty and staff sprawled out across the University of Georgia campus playing dead to protest the university’s opening plans, a demonstration organized by the workers union. Masks are required at UGA, but that’s not enough, according to critics.

Corvias took on $548 million in debt for the statewide project, which aims to provide 6,500 new beds and significantly renovates existing student housing for 3,500 more, with the understanding that they would be paid back through student fees, Wilson said in the May letter. The 2015 deal also released the Board of Regents from more than $311 million of its own debt.

The company plans to follow guidelines from the Centers for Disease Control and Prevention “as closely as reasonably possible,” Wilson said, adding that his interpretation is the public health agency does not require social distancing among roommates.

Each member school made its own decision about housing capacity, and none of them indicated they were influenced by the concerns raised by Corvias, said university system spokesman Aaron Diamant.

In any event, Georgia State did not need to restrict fall dorm move-ins after fewer students signed up, he said.

“Georgia State University approached system leadership with a plan to reduce housing density for the fall semester and was told it was their decision,” Diamant said. “The system office performed an analysis to review the impact as we generally do with our housing portfolios. It became apparent to GSU in July that dramatically reduced student demand for housing has resulted in lower density than what was being planned for, and therefore the issue was moot and the proposed plan was not implemented.”

Corvias entered into a 40-year agreement with the University System of Georgia in 2015 to provide housing for nine schools, including Georgia State, Augusta University and Columbus State University. Such public-private partnerships are becoming more common in universities for services once handled by the schools, including housing, food services and tutoring programs. The arrangements allow universities to outsource amenities without having to pay for them and oversee their construction or operation.

Georgia voters paved the way for the Corvias arrangement in 2014, when they approved a referendum allowing student housing to remain tax-exempt if it is managed by a private company. The bill providing for the referendum received bipartisan support in the state legislature. It was sponsored by Republican Lynne Riley, who is now state treasurer under Gov. Brian Kemp, and was co-sponsored by then-House Minority Leader Stacey Abrams.

Some students and professors say they are angry about what they read in the letter and attribute financial motives to the guidelines they feel fall short of what is needed to protect people from getting infected by the coronavirus.

“This explains so much,” said Brian Magerko, a professor in the School of Literature, Media, and Communication at Georgia Tech. “We couldn’t figure out why USG would insist on fully opening its campuses despite Georgia’s raging virus outbreak. Now we know what’s happening. Corvias will lose money if students study remotely, and it is trying to force USG to keep students in the dorms, despite the risks.”

Across the state, another faculty member echoed Magerko’s sentiment.

“When I read the document, it confirmed that finances are driving a lot of decisions rather than safety,” said Brian Schwartz, a professor of biology at Columbus State University and president of the local chapter of the American Association of University Professors. “I wondered why we weren’t reducing housing capacity. Now I know that a private company is leveraging our debt against student safety.”

“I felt that they were choosing revenue over students’ health, in a blatant manner,” Peterson said. “The document seems to indicate that universities are being threatened with legal action if they try to do things like decrease dorm density. Corvias does not seem concerned for student health or the health of their surrounding communities, and this is very alarming to me.”

Peterson, who said she had concerns about going back to campus before hearing about the dorm situation, learned about the document Wednesday and spent much of Thursday reading over it and discussing it with classmates in a group chat.

“I didn’t even know what Corvias was,” she said.

Ross Williams is a reporter with the online newspaper Georgia Recorder, where this story first appeared, at georgiarecorder.com.

Cool Down with Razzi King, And More Music News and Gossip

Pandy, Clyde Will Face Off in 9th Congressional District