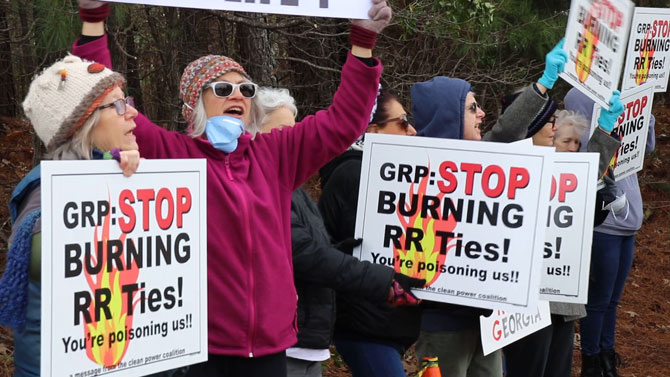 Gerry Wilson is frustrated with the smell, noise and ash coming from a wood-burning plant that is feeding its furnace chemically treated railroad ties near her home in rural Franklin County.

But the retired school teacher is most worried about what she can’t see, hear or smell.

“It’s heartbreaking to live on land and think you need to move because you can’t stand to live there anymore,” Wilson told lawmakers last week. “I could live with the wood pellets, but I can’t live thinking about my organic lettuce absorbing that tiny particulate matter.”

It’s not just her lettuce, though. Wilson said she is especially worried about the long-term impact on local children who breathe in those emissions daily.

Wilson and other residents of Franklin and Madison counties—where a pair of biomass plants are located—made the trek down to the state Capitol Tuesday to bolster the case for halting the burning of creosote- or naphthenate-treated wood at power plants in Georgia.

A trio of local GOP legislators—Sen. John Wilkinson and Reps. Alan Powell and Tom McCall—appeared together at a Senate Regulated Industries and Utilities Committee meeting Feb. 25 to press for the creosote-burning ban proposed in House Bill 857. Wilkinson said that when the operation was first approved in 2015, the community was assured the plants would burn “clean wood chips.”

“I don’t think you come into the middle of a residential community and a farm community and you tell people you’re going to do one thing and then you do something else,” Wilkinson said.

A 2016 federal rule change opened the door for old creosote-treated railroad ties to become fuel at some power plants. The state Environmental Protection Division issued permits for the twin local plants to burn crossties in 2019, allowing them to use crossties for up to 20% of their fuel.

The proposal faces opposition from business interests, including CSX Transportation, the Railway Tie Association and Georgia Renewable Power, which is an Alabama-based company that owns the two plants. A CSX representative said about three quarters of its railroad ties nationally are sent to facilities like GRP to become energy.

“We welcome the opportunity to address the community concerns in an open forum, but we oppose the bill and feel that it’s contrary to current law and regulation,” Terri Lyndall, a lobbyist representing Georgia Renewable Power, told lawmakers.

Lyndall chalked the conflict with the local community to a communications breakdown. She said the company has a contract with Georgia Power to produce energy and has recently struggled to feed the plants timber products because of the weather. “We made a mistake, and what we made a mistake with are the citizens. We did not tell the citizens what was happening, what was going on,” she said.

But residents argue it goes much deeper than that and hope lawmakers will pass the ban on using chemical-soaked wood in biomass as one way to keep the power company in check. The proposal also has the backing of the American Lung Association and the Madison County Commission, which passed a resolution supporting the measure last week.

“Fugitive emissions—the dust from the creosote—is one of the worst things that’s happening,” said Ruth Ann Tesanovich, who lives about a mile away from one of the plants. “It’s washing into the streams. It’s blowing over to the farmers’ fields. Our cows are eating it.

“I don’t think we can put money above the health of our citizens,” Tesanovich said. “We need to outlaw the burning of the railroad ties in Georgia, or we’re going to have more of this.”

This article originally appeared in the Georgia Recorder.