Research Projects Will Shed Light on Slavery at UGA 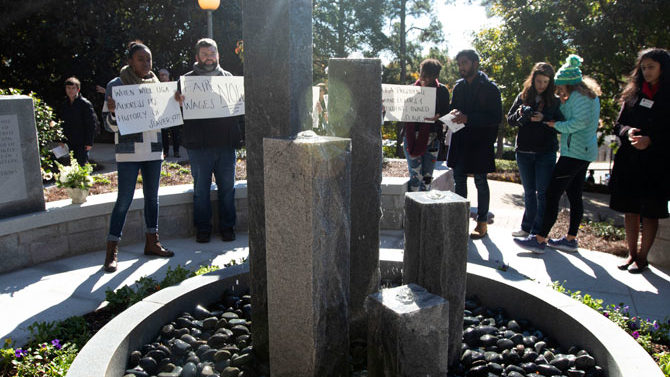 In the wake of the rediscovery of human remains underneath Baldwin Hall, the University of Georgia is finally meeting demands to research the history of slavery on campus and joining a consortium of universities that are doing the same.

UGA recently awarded a grant to a 21-member academic team to study its history of slavery, and has also joined the Universities Studying Slavery Consortium to assist the team with “scholarly exchange and academic collaboration,” according to a press release from the provost’s office.

The USS consortium helps institutions work together as they confront “both historical and contemporary issues dealing with race and inequality” in campus communities. The consortium “hosts semi-annual meetings to discuss strategies, collaborate on research, and learn from one another,” according to its website.

The research team will be led by Chana Kai Lee, an associate professor of history and African American studies at UGA, and will include professors and faculty from different disciplines.

The consortium’s experience will allow the team to learn practical ways to move forward with their research. “It helps us stay in contact with colleagues who have gone through similar experiences in trying to document the legacy of slavery and Jim Crow, essentially the very difficult questions around racism and universities having to deal with that legacy,” Lee said.

After human remains—likely those of slaves, based on their age and race indicated by DNA testing—were found in unmarked graves during a Baldwin Hall expansion project four years ago, UGA has been criticized for its handling of these remains during a series of contentious episodes with faculty, activists and community leaders. On the advice of the state archeologist’s office, UGA reinterred the remains at nearby Oconee Hill Cemetery, although some local African-American leaders wanted them reburied alongside their descendants at a historically black cemetery.

Last April, the Franklin College Faculty Senate released a report recommending that the university take action to correct its approach concerning the slavery issue. A task force said the administration should apologize to the descendents of those who were discovered under Baldwin Hall, engage the community with town hall meetings, apologize to faculty who felt harassed for discussing the issue and acknowledge the history of slavery on campus by, at minimum, joining the Universities Studying Slavery consortium. Activists have made similar demands at protests and screenings of the documentary Below Baldwin.

Although UGA has yet to engage in the Faculty Senate’s other recommendations besides the consortium, other colleges have done more after exploring their history. A “statement of regret” was issued in 2011 by Emory University after it conducted its own research into its legacy of slavery. UGA psychology professor Janet Frick, who brought the Baldwin issue before the Faculty Senate, recognizes similar opportunities for UGA to respond. “I hope with time, some of those other suggestions may turn out to still be on the table. I think that would be appropriate,” she said.

Last May, campus police blocked members of the Coalition for Recognition and Redress from entering the Administration Building. They were seeking a meeting with UGA President Jere Morehead, who had not responded to calls asking him to address the coalition’s demands. In a news release earlier this month, the coalition praised UGA for its decision to join USS, calling it a “victory for our community and another step in the right direction for UGA.”

Coalition member Rachelle Berry, a doctoral student in geography, said she is hopeful the university will follow in the footsteps of other schools who have joined the consortium by putting effort into evaluating the campus’ history as a “white supremacist landscape and ways they can change that.”

The USS consists of 57 universities in the U.S. and the United Kingdom, including Virginia, North Carolina, South Carolina, Clemson and Ole Miss. Other universities in the consortium are giving tours dedicated to the history of slavery on those campuses and are offering classes to teach students about it. UGA could follow this path by “teaching classes so students know that Abraham Baldwin, the person who started this university, was a slave holder, and that slaves worked on this university”—a history few students are aware of and that is not “reflected within the landscape of the campus,” Berry said.

Scott Nesbit, a UGA assistant professor of digital humanities and member of the academic team, will use his previous experience researching university archives “that shed light” on UGA’s relationship with slavery. He has taught on this subject in previous courses since 2015 and was mentioned in the Faculty Senate’s report as being one of the professors administrators intimidated for doing so. Joining the consortium will give the research team greater access to material and “sends a signal, both to us and to the community in Athens, as well as to other universities, that the university has a firm commitment to understanding these aspects of its past, its full past, from 1785,” Nesbit said.

The research team will “analyze primary sources and archaeological data related to the history of slavery at the university,” including university archives, slave censuses and family and community histories, according to UGA’s press release.

An advisory board, including USS members and Athens community leaders Fred Smith Sr. and Linda Davis—who were both featured prominently in Below Baldwin, directed by then-UGA student Joe Lavine—will consult the research team by providing “sources of information about the local history, in particular, family information,” Lee said. Davis, who serves on the Clarke County Board of Education, sees this as an important starting point. “From nothing to anything is a beginning,” Davis said.

Although the current research will stop at the end of the Civil War, Davis said it could be a springboard for further research to look at the years after slavery was abolished and how it has affected the African-American community in Athens. “I’m hoping that this would then trigger, I guess, a response throughout the entire university community—not just the Franklin College of Arts and Sciences, but through all departments and all disciplines. Look at the practices that are in place now to see how they are contributing to the continuation of the Jim Crow era,” Davis said.

The research initiative is expected to be completed by June 30, 2021, and will be published as a print and electronic collection of essays with the UGA Press and in the journal The Public Historian.