Behind the Scenes With the Climate Strike’s New York Organizers 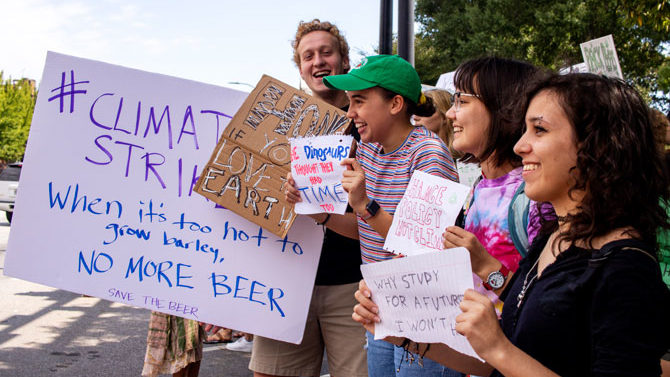 Teen Vogue reporter Sarah Emily Baum spent weeks with the student organizers of the New York City Youth Climate Strike, attending planning meetings and getting up to speed on how they put together one of the largest mass mobilizations for climate justice in history.

Aug. 21: About one month before the Youth Climate Strike

In a New York City basement, just down the street from Trump International Hotel, 50 kids sit in folding chairs trying to come up with a plan to save the world.

“We really want this organizing body not to focus on September 20 as a goal, rather, as a catalyst,” says Xiye Bastida, a 17-year-old indigenous climate activist and member of the NYC Youth Climate Strike’s core committee. Now a resident of Morningside Heights, in New York City, Xiye spent most of her life in San Pedro Tultepec, Mexico. Back then, she saw the flooding of her hometown as an anomaly, rather than a symptom of a much more sinister problem — the climate crisis.

On September 20, Xiye and activists around the world will mobilize for the Youth Climate Strike. At the helm of this action is Greta Thunberg, a 16-year-old Swedish environmentalist who went viral for going on a weekly school strike to protest lawmakers’ inaction in response to the climate emergency. Thunberg will be joining the march in New York City ahead of the United Nations Climate Summit, where major world powers will decide whether meaningful steps will be taken to fight the climate crisis, or if they will continue stalling until it’s too late.

Until then, students like Xiye are building the movement from the ground up. “[Smaller actions like this are] important because organizing is always the backbone of every big action,” she says. “You need to be coordinated if you want to have a united front.”

Although some global warming is organic, climate scientists say human activity (like the emission of fossil fuels) has caused temperatures to increase at an accelerated rate. When the temperature warms, glaciers melt, sea levels rise, and natural disasters increase in frequency and decimate the globe. According to the United Nations, a global warming of just 1.5 degrees Celsius would be catastrophic.

Young people — especially those who are indigenous, lower-income, or people of color — are expected to be hit the hardest. That’s, in part, why they’re leading this movement. In addition to Greta and Xiye, youth-led organizations from around the country and around the world are driving the cause forward, each adding their own unique voice to the chorus of young people demanding change. Zero Hour, led by 17-year-old Seattle native Jamie Margolin, uplifts marginalized voices on the front lines of the climate fight; The Sunrise Movement, co-founded by 26-year-old Varshini Prakash of Boston, prioritizes lobbying for policies like the Green New Deal; Extinction Rebellion Youth uses nonviolent direct action to bring a sense of urgency to the climate crisis. The list goes on.

At the end of the meeting, the students head outside. Some are in large, blow-up dinosaur costumes — “because we’ll be fossils too, if we don’t act” — and in the streets, against the backdrop of Central Park and traffic lights, they dance and sing their protest songs.

After spending 15 days on a zero-emissions yacht sailing across the Atlantic Ocean, Greta Thunberg sets foot in New York City for the first time. She is greeted by a swarm of press and a crowd that includes Xiye and a hoard of other young activists who are chanting her name and anticipating the upcoming Friday strike — Thunberg’s first in the United States. They plan to convene outside the United Nations headquarters in Manhattan later that day.

By this point, eighth grader Alexandria Villaseñor, a 14-year-old New York City student, had been striking there every Friday for 38 consecutive weeks. Alexandria, who was asthma, began her climate activism after a family visit to California left her ill and unable to breathe. The smoke from rampant forest fires had seeped into their house.

“I saw the connection between that and climate change,” says Alexandria. She founded Earth Uprising, an organization promoting climate literacy among young people, and is serving as a core organizer of the NYC Youth Climate Strike. She has continued her strikes through rain, cold, and a polar vortex, as well as a death threats from right-wing trolls and climate deniers.

Nonetheless, Alexandria says, “I wanted to defend my hometown.” That’s why she made a simple white sign and started her strike on a little metal bench outside the United Nations, where she often sat alone.

This was not one of those weeks.

Hundreds of students, activists, and journalists descended upon her quiet little bench. A circle of teenagers stood outside, and someone “shoved” Alexandria to the middle, right next to Greta. In the chaos, it took almost 30 minutes just to cross the street, Alexandria tells Teen Vogue.

“Halfway through at the park we got the message the president of the U.N. general assembly wanted to meet with us and they shuffled us back to the entrance of the building,” Alexandria says. The teen girls — Alexandria, Greta, and Xiye — told her that they were fighting for changes, like a more ambitious international greenhouse gas emissions agreement.

“We are out of time,” Alexandria tells Teen Vogue. “We’re in a crisis. But now we’re raising awareness and getting attention from people in power — and we’re just getting started.”

“I sure wasn’t doing that when I was their age,” a photographer says. On the sidewalk, kids are making their protest signs. Amanda Cabrera, an eight-year-old climate striker who lives in New York City, was writing climate justice slogans on her arms, but needed help from a friend because she wasn’t quite sure how to spell “planet.”

“[The climate crisis] makes me feel angry because Earth is giving us life but we aren’t giving it life,” Amanda tells Teen Vogue. “We need the planet but the planet doesn’t need us.”

She attends the strike that week with her friend, nine-year-old Aaron Thomases. “[I’ve been an activist] since the COP24, when my mom showed me the video of Greta Thunberg speaking,” Aaron says. “I want other kids to know [the climate emergency] is real, it’s happening, and if you want to be a superhero, now is your chance.”

After an impromptu press conference next to Alexandria’s bench, where Greta fielded questions from reporters in multiple languages, the group moves to a nearby park. Even in New York, we can feel ripples from Hurricane Dorian, a Category 5 storm that decimated the Bahamas. Wind blows signs across the street and inverts umbrellas in the rain. Still, the strikers hold strong.

One student protestor talks about going to school for weeks without power after Hurricane Sandy in 2012. Another, 18-year-old Shiv Soin, tells the crowd he had gotten ill from drought and sandstorms while visiting India, and he later realized this was yet another symptom of the climate emergency. And Clarabell Moses, a teen activist visiting New York from California, talked about her hometown of Paradise — the very same town where wildfires had given Alexandria Villaseñor an asthma attack and also launched Clarabell’s fight for climate justice.

“My entire childhood home burned to the ground,” she says. “I watched the people around me lose their homes, loved ones, and even their lives. Civil disobedience like this is important because when we disrupt the system, we break it down and build it back up better than before.”

“At the forefront of every revolution has been young people,” adds Ayisha Sidiqqa, a New York City student. “From the Greensboro sit-ins to the anti-Vietnam War protests, to the movement happening right now in Hong Kong — when students speak together, the whole world listens.”

Sept. 19:  One day before the Youth Climate Strike

The Amazon rainforest is burning. Time is running out.

According to a recent count, more than 93,000 fires were decimating the Amazon — burning more than one soccer field per minute, according to the INPE, Brazil’s National Institute for Space Research.

Forest fires are in fact worsened by the climate crisis, but these fires in particular are man-made. And the government is doing little to stop them.

As kids around the world gear up for the Youth Climate Strike Friday, Brazil’s environmental minister awaits a meeting with climate change deniers and the president of the country actively fights international efforts to extinguish the blaze.

“It didn’t catch fire, it was set on fire by [those] who want to burn it down for agriculture and to make money,” 17-year-old climate activist Jamie Margolin, founder of Zero Hour, tells Teen Vogue ahead of the September 19 meeting. The Washington State native has also participated in the school strikes — and hers specifically focus on the Amazon rainforest, often called “the lungs of the planet.”

“If we lose that, there’s no hope,” Jamie says.

The Amazon rainforest is a carbon sink. This means it drains carbon dioxide, the primary greenhouse gas associated with global warming, from the atmosphere. The gas accumulates in trees over time, meaning that when the Amazon burns those gases are suddenly released back into the atmosphere.

She also says fighting the climate emergency means fighting the root causes: excessive capitalism, colonialism, and racism. It’s a sentiment not lost on her friend and fellow activist David, 19, of Medellín, Colombia, who is on the front lines of this fight. He asked that his full name not be used because he says environmental activists like him are frequently targeted by paramilitary groups and guerrilla forces in Latin America.

“From the windows of my house, I can see the mountains burn,” David tells Teen Vogue. This past year, Colombia was ravaged by fires, flooding, and crop failure, yet another symptom of the climate emergency.

“[The fires in the Amazon] make me feel like this strike is more necessary than ever,” Jamie says. “While mass public opinion calls for climate action, those at the top profit from mass destruction.”

Still, Jamie is hopeful. “There’s only so long those in power can get away with going against the common good and the will of the people,” she says. “The tables will turn starting on September 20.”

This story was originally published in Teen Vogue as part of Covering Climate Now, a global collaboration of more than 250 news outlets to strengthen coverage of the climate story.