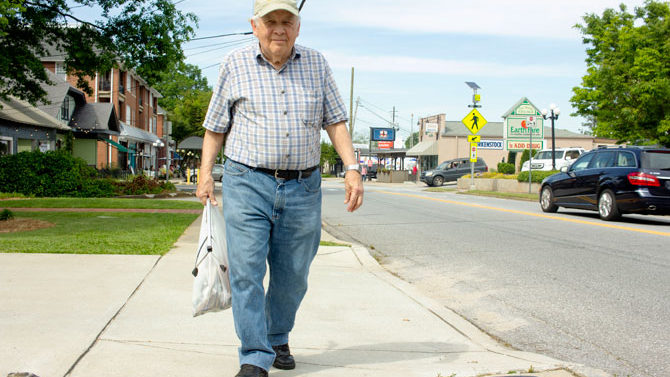 You know those highway markers that tell you a group has adopted a stretch of road and vowed to keep it neat? You could put a sign on Lumpkin and another on Milledge and credit Jared Harper for keeping both clean.

You may have seen him—for years, Harper walked from his home in Glenwood to Lumpkin Street to Milledge Avenue to Broad Street and back again. To make the walk less boring, he started picking up trash.

Almost 30 years later, Harper, 74, is still walking and picking. Two back surgeries and a subsequent injury to his shoulder have cut his distance almost in half, but he soldiers on. Today, he stops his walk at the Five Points intersection, and he uses a picker, because leaning over is difficult. At home, he sorts the trash into what’s recyclable and what isn’t.

Tidying up the neighborhood isn’t the only activity for Harper, who retired as a kindergarten teacher at Loganville Primary School in 1992. For years, he was on the board of the Athens Land Trust; he’s still on the ALT’s affordable housing committee. He’s on the Solid Waste Citizens Advisory Committee. He volunteers at every library book sale, emptying cartons of books and arranging them on tables. And he’s hoping to be chosen as a member of the Athens-Clarke County Library Board. He and his wife, Elena Brown, collect local art and donate to as many charities as they can afford.

If you haven’t seen Harper, you may have read about him or his work in The New York Times or Time magazine. Why? Because he’s considered an authority on the Irish Travelers, an insular band of folks living in a trailer park in greater North Augusta, SC. Harper is cited everywhere. He wrote his PhD thesis in social anthropology at the University of Georgia—the late Charles Hudson was his major professor—and concentrated on the Cant, the language the Irish Travellers developed. He calls it “an Irish-Gaelic pig Latin.”

On his first visit to Murphy Village, he was invited into her trailer by Margaret Sherlock, a married woman whose husband was on the road, spray-painting metal buildings. Other Traveller women were scandalized, and the next time Harper knocked on Sherlock’s trailer, she didn’t answer. Harper learned that social mores frowned on a woman being alone with any man other than her husband. So, for the next visit, he sat in a lawn chair out in the yard, near groups of women and men, and asked about their history and lives.

When they weren’t running around the trailers, Traveler children would talk to Harper, often in the Cant. He would gather a word here, a sentence there, and analyze the language against Shelta, an ancient Irish language. Eventually, he picked up enough words to make sentences, and to make sense of what he was hearing. Gradually, he figured out what they were saying.

Today, 40 years after finishing his doctorate, Harper can still speak the Cant, telling you, “Hide the mule in the swamp, the man is coming back.” While not especially useful in an urban setting, it’s a common saying that dates from the Irish Travelers’ beginnings in the South as horse and mule traders. They came from Tonawanda, NY, after the Civil War, he says, making Nashville and Atlanta cultural centers. Who knows why they set up shop in South Carolina?

If a Traveler died during the year, his or her body would be shipped to a mortuary in Atlanta and kept “on ice” until the annual gathering of the group, “when they would throw a wingding of a wake and funeral,” Harper says.

He learned there are only a few last names in Murphy Village, including Sherlock, Carroll, Riley, O’Hare and McNamara. Having the same name for three or four men confuses the authorities when they come looking for someone accused of ripping off a customer.

“I went [to Murphy Village] a lot, but I was never really comfortable, because I was there under false pretensions,” Harper says. “One thing you never do is call [the Travelers] ‘gypsies,’ because if you do, that’s it, no one will ever talk to you.”