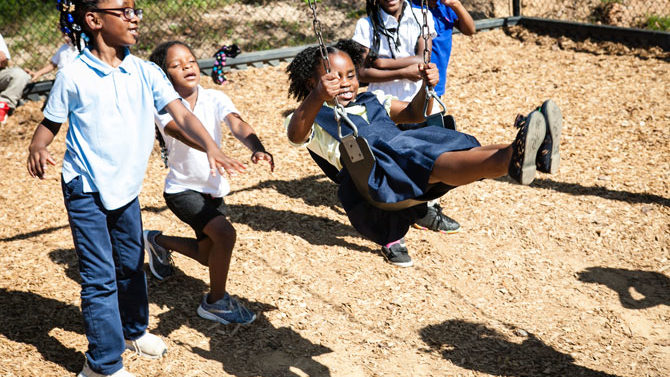 Doctoral student Susan Lane was shocked to learn that her third-grader was getting between eight and 12 minutes of recess at his Clarke County elementary school. She met first with her child’s teacher and then with the school principal, who had no idea the time allotted for third-grade recess was so brief. Soon, her child and his classmates were getting 25 minutes to run, socialize and relax on the playground.

At other schools, Lane learned, things are very different. She compiled a spreadsheet on each school, noting the length of recess for pre-K students and K-5 students and the racial demographics at each school. She then compared those figures to test scores for each school. It wasn’t surprising to her to learn that schools with mostly black and Hispanic children tend to have the smallest amount of time devoted to recess and the lowest test scores.

Lane shared her findings with the Clarke County Board of Education at its Feb. 21 meeting.

Her spreadsheet shows that Barrow Elementary, whose student population is 44 percent white and whose Great Schools rating is seven out of 10, manages to give its students more than 30 minutes of free play every day. Alps Road Elementary, where the student population is 78 percent African American, gives all grades but pre-K only 15 minutes of recess, “which is at most 12, after they have to demonstrate how well they can stand at attention for Playworks instruction,” Lane told the school board. She didn’t share her assessment of Playworks to the board, saying she would address the matter at a later time.

Playworks, a national nonprofit that helps children “build valuable life skills through play,” is in five public Clarke County schools. The Board of Education approved a $100,000 expenditure at its December meeting to hire five part-time Playworks coaches “to implement strategies, games, and systems to develop and sustain a positive educational culture.” In addition to Alps Road, the Playworks coaches are working at Timothy Road Elementary, Chase Street Elementary, Fowler Drive Elementary and Howard B. Stroud Elementary. Timothy and Chase have paid $20,000 each for the coaches from their After School Program funds, while $20,000 for each of the other three schools comes from Title 1 monies—extra federal funds for schools with high poverty rates.

In her research, Lane said she also learned students can lose recess because of behavioral problems.

She told the board she has talked to Superintendent Demond Means and said that he agrees with three proposals: a minimum of 30 minutes of recess every day for all students; no denying a student recess for any reason but safety; and creating a sensible weather policy for all schools to follow. The American Academy of Pediatrics says unstructured free play is crucial for a child’s development.

According to Lane, Means said the proposals aren’t likely to be put in place before fall 2020. She encouraged the board to adopt them, saying that she “isn’t that patient.”