Run Over: Timmy Patmon and the Complexities of a Black Man Navigating the Legal System 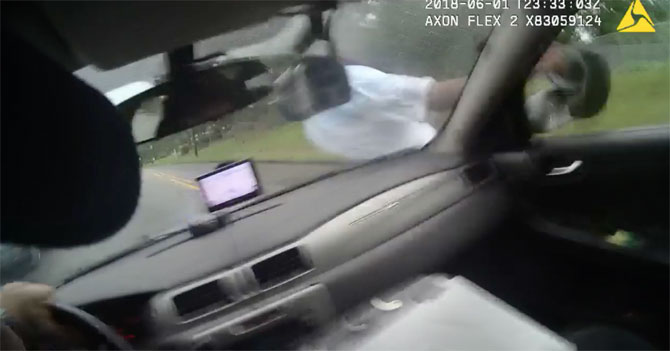 Sometimes, you pull a thread, and everything unravels.

For Timmy Patmon, it all started with a case of mistaken identity when a woman falsely accused of him of stealing $25. A year, a drug charge and a probation violation later, Patmon found himself in handcuffs, having just been hit by an Athens-Clarke County police cruiser, on the national news and at the center of yet another national firestorm about police brutality against African Americans.

On June 1, two ACCPD officers spotted Patmon, a 24-year-old known to friends as “Woozy,” walking along Nellie B Avenue, and believed there was a warrant for his arrest. When they tried to flag down Patmon, he ran. Officer Hunter Blackmon took off after him on foot, while Taylor Saulters pursued in his police car.

Body-camera video released by ACCPD shows Saulters driving up onto the sidewalk in an effort to cut off Patmon, apparently popping a tire in the process. Patmon cut back right, taking off down the other side of the street, and Saulters accelerated again. What happened next became the Zapruder film of Athens for several days: Saulters turned the wheel to the right, hitting Patmon, who rolled onto the hood and back off. Blackmon quickly moved in to cuff Patmon, who struggled at first, until Saulters pulled his stun gun. Angry bystanders filled the sidewalks, shouting things like, “Why’d you run him over with the car like that? That’s not right!”

Who Is Timmy Patmon?

Until recently, Patmon was working at the McDonald’s on Prince Avenue and taking classes to get his GED. He spent his free time shooting hoops at the East Athens Community Center, according to his brother, Timothy Patmon. “He’s a good young man, and he’s not a troublemaker,” Timothy told Flagpole.

Because the brothers are a year apart, Timothy said they have always been close. “Coming up as kids, we used to do everything together. We played football together, basketball together.  Everywhere we’d go, we’d go together.”

The boys had an older sister, but Timothy said she died in 2011 due to complications from a heart condition. Their father died the following year after being diagnosed with throat cancer. Timmy Patmon would have graduated from Cedar Shoals that year, but didn’t finish.

Timothy Patmon shook his head when he talked about the 2017 traffic stop that got his younger brother in trouble in the first place. Until then, he didn’t have a criminal record. That initial snag, which led to the most recent unraveling, shouldn’t have happened in the first place.

It stemmed from a call to police in April 2017 in which a woman complained that a man had stolen $25 out of her car. According to a police report, as the woman described the situation to the officer, she spotted some people in a passing car, identifying one of the passengers as the person who took her money. When the officer pulled over the car, all three of its passengers—Patmon, his girlfriend Turkessa Sheats and another woman—denied any involvement, and eventually the officer realized that Patmon wasn’t the suspect.

But the officer also learned that the car, which was owned and driven by Sheats, didn’t have insurance, and Sheats had a suspended license. While Sheats was being taken into custody, she asked the officer if she could give Patmon the money she was holding. Patmon removed money from her bra—along with two plastic baggies containing small amounts of marijuana and methamphetamine, according to the report. Patmon took the rap for the drugs, although both wound up being charged.

The original report of theft, which caused Sheats’ car to be pulled over to begin with, wasn’t pursued because the woman’s story “did not make sense,” the report said.

Patmon’s lawyer, Al Fargione, said the felony warrant that caused the most recent arrest stemmed from a “technical violation” of the probation associated with the 2017 drug charges. “When you’re placed on probation, there are certain things you’re expected to do,” Fargione said. “Some of those might be checking in with your probation officer. So the violations in the warrant are for the technicalities.”

Or, as Athens for Everyone activist Jesse Houle put it, “Timmy missed a meeting.”

Houle was one of about a dozen people who sat through a four-hour Athens-Clarke County Commission meeting June 5 waiting for the opportunity to speak and show their support for Police Chief Scott Freeman, who fired Saulters two days after the incident. “I applaud him for having the courage to not do what’s popular in the current political climate,” Athens resident Flodine King said.

This is the third time Freeman has had to make this kind of call since he was hired in 2015. That year, he fired an officer who assaulted a University of Georgia student who’d passed out drunk outside a downtown hotel. In 2016, he defended another officer who shot a man who reached for his gun during questioning. Neither generated the level of controversy that Saulters’ firing did.

Several commissioners also gave Freeman a vote of confidence, although one, Allison Wright, said it’s inappropriate for commissioners to get involved in personnel matters. “What we saw Friday night was clearly assault with a deadly weapon,” Commissioner Melissa Link said. “[Saulters] might as well have pulled his gun and fired it.”

The one vote of confidence that mattered came from county Manager Blaine Williams, his direct supervisor. “I support his decision because of the facts of what happened,” Williams said. “Not because of pressure one way or the other. It’s what needed to be done.”

The local chapter of the NAACP also agreed with Freeman’s action. “The NAACP right now is satisfied with what Chief Freeman did,” President Alvin Sheats said. The organization won’t get involved any further unless Patmon’s family reaches out for legal assistance, but so far they haven’t, he said. 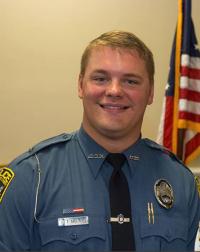 Many people disagreed with Freeman, though, to put it lightly. ACCPD’s Facebook page and news stories about the incident quickly filled up with thousands of racist comments calling Patmon a thug and worse, and predicting Athens would become a crime-ridden hellhole out of a John Carpenter film. On June 4—the day after Saulters was fired—Oglethorpe County Sheriff David Gabriel hired him as a deputy, announcing the move in a Facebook post that seemed to troll Athens and ACCPD. Gabriel described the incident as “a fleeing felon [striking] his patrol car…

“In talking to Saulters the first question he asked was if our citizens supported law enforcement,” Gabriel wrote. “Without hesitation I assured him they did and that we have excellent people that live in our county. I have no reservations about Dep. Saulters serving this community.”

Gabriel’s description of events—that Patmon ran into Saulters’ car—is consistent with what Saulters told superiors. But the internal affairs investigation found that Saulters intentionally turned his vehicle in the direction of Patmon. “There are no facts that were uncovered that would have led to the justification for this level of use of force in this incident,” the report states.

Georgia Bureau of Investigation and Georgia State Patrol investigations are ongoing. They could result in charges against Saulters, although if they do, a special prosecutor will have to be appointed. The Western Circuit District Attorney’s office has recused itself because Saulters’ mother works there. (In addition, his father, Jerry, is an ACCPD captain.)

Muddying the waters further, over the weekend WSB obtained a tape through Saulters’ attorney, Philip Holloway, in which Freeman said “there’s not a fiber in my body that believes” Saulters intentionally hit Patmon. Freeman later told the station that the statement isn’t a contradiction. “I told my police officers that it was not acceptable under any circumstances, and I would not allow for our officers to have the perception that it was OK to use a police vehicle to chase down anybody in that same situation,” he said.

Fargione, Patmon’s lawyer, released a statement Saturday night calling the tape “disconcerting,” and accusing Freeman of undermining the ongoing GBI investigation and setting a poor example for his officers. The statement also noted that, as shown on the body-cam footage, when Patmon complained of being injured, Saulters told him, “I know what I did,” which Fargione said “show[s] his intent.”

Fargione, who is representing Patmon against the criminal charges he is facing—the felony warrant and evading a law enforcement officer—as well as a potential civil matter related to Saulters’ actions, said until the state attorney’s office assigns a special prosecutor to handle the case, Patmon has to remain in jail. Bail has been set for one charge, but bail for the warrant related to his probation violation must be set by a judge. “I’ve yet to hear back, but since this is his first probation violation, often these are settled out of court,” said Fargione.

Flagpole attempted to visit Patmon in jail, but he had already used up his allotment of visitors for the week. 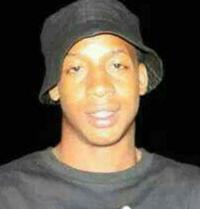 Long after Patmon is released, Athens residents will be having a conversation about criminal justice reform, from additional police training to decriminalization of marijuana possession to ending the practice of cash bail.

“It should trigger a broader conversation about bail, about the discretion [probation] officers have,” local activist Irami Osei-Frimpong said. But he is skeptical that training is the answer. “You’re not going to train [bias] out of people if it’s a symptom of a broader culture,” he said.

Watching the hours of body-cam footage beyond the violent jolt of metal hitting flesh, a more sympathetic, or at least human, picture of local police emerges. As a third officer drove Patmon to a waiting ambulance, then to the hospital and then to jail, the two became something resembling friends, commiserating about road rash and swapping stories about their favorite video games.

“I’m gonna… finish my report and call it night,” the officer said at one point. Timmy Patmon had no such luxury.

His arrest continues to haunt his brother, Timothy. “It makes me really scared, too,” he said, “because they’re using my name, and they can come back and do something to me.”