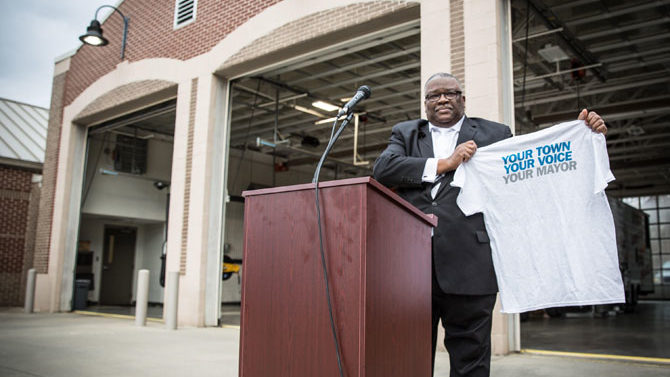 What will you get if former Commissioner Harry Sims gets elected mayor? He says you’ll get “open-mindedness, not tunnel vision,” from someone whose focus is all of Athens-Clarke County, not just the area inside the bypass.

“For instance, out here,” he says, gesturing to an open pasture in Winterville, “you have septic systems that are going to fail. You’re going to have houses that aren’t inhabitable. These old systems out Nowhere Road, they’re reaching the end of their life span.”

Sims is at a fundraiser off Beaverdam Road, where the late Commissioner Charles Carter used to farm. He had been to church earlier that day at East Friendship Baptist, where he’s been a deacon for decades. One of those attending the fundraising event says she knows Carter would support Sims if he were alive. Sims laughs. He says the two men sat next to each other during commission meetings for years, “and I loved that man and his sense of humor.”

Like Carter, Sims is an Athens native, a graduate of Burney-Harris High and the University of Georgia. After a year of working with his stepfather at the W.C. Crawford Coal and Mattress Company—“at one of those jobs that gives you a push to get your behind to school and to do what you need to do”—he started college. It was 1968, seven years after Charlayne Hunter and Hamilton Holmes had integrated UGA. Sims says he was one of maybe 80 black students on campus.

“It was a big change,” he says, the first time he was in school with white students. “It was a year and a half before I was in a class with another black student. I’d look around at the white students and think, ‘Well, this is who I have to compete against.’”

An interest in helping children led him to major in elementary education. He started teaching at Barrow Elementary School and never left, lasting through five principals and hundreds of students before retiring. While he was teaching, he ran for a seat on the Athens City Council and served two and a half years, until the city and county governments unified in 1990. He lost an election to Tom Chasteen and later defeated Miriam Moore for the District 2 commission seat, which he kept for 25 years.

He says he decided to run for the mayor’s office about a year ago, “after much prayer and supplication. I knew Nancy [Denson] couldn’t run again and thought there’s a time and a season for everything, and this is the time.”

For the past few years, Sims has been involved in youth development programs to prevent young people in town from joining gangs, chairing a task force appointed by Denson after departing police chief Jack Lumpkin warned officials that gangs were making a comeback.

He says he’s proud of the commission’s preparations for infrastructure, especially the expansion and upgrade of waste treatment plants. It gives the county capacity until 2050. He chaired the pension board for the county and watched the employee pension fund grow from $32 million to $240 million. “Someone asked me how we did that and I said, ‘You give us nothing, we can make something. You give us something, we can make a lot of it,’” he says.

One problem he sees in town is that there are so many nonprofits that are territorial, leaving him to wonder “who’s in charge” and why they don’t consolidate in order to get a bigger part of the pie. “Sometimes it seems they’re not working together,” he says.

Rather than copy programs or projects that have succeeded in Greenville, SC, Portland, OR, Chattanooga, TN or Boulder, CO, Sims believes “Athens has its own characteristics and strengths. We need to build on those things instead of copying these other places.”