The Campus Carry Law Is Now in Effect at UGA 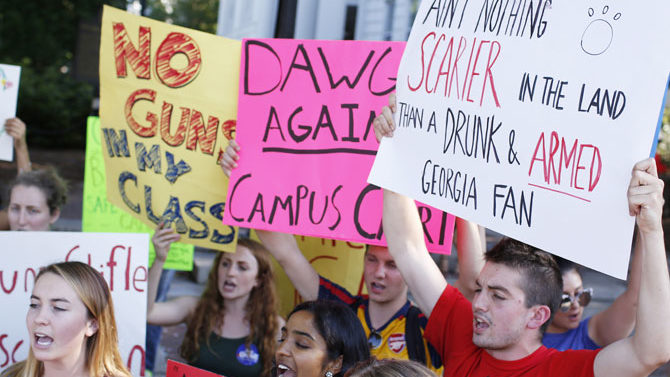 This week, University of Georgia students may be carrying a Beretta and bullets to class in addition to books. Getting a B in class might take on a whole new meeting.

The new “campus carry” law passed by the state legislature and signed by Gov. Nathan Deal last spring took effect July 1. It allows people age 21 and older with concealed-carry permits to bring guns onto most parts of the UGA campus.

The law is an extremely unpopular one—78 percent of Georgians opposed it in 2014, according to an Atlanta Journal-Constitution poll, and 54 percent said they didn’t want lawmakers to pursue the issue again this year—and likely nowhere more so than in Athens. Many UGA faculty and staff members are on edge, wondering how they’ll deal with an uncomfortable class discussion or an emotional or confrontational student who may or may not be armed.

“I’ve heard people talk about leaving,” says Jenny Gropp, managing editor of The Georgia Review, UGA’s literary magazine, who helped organized opposition to the law. “They can’t teach in that environment. They’re nervous.” She says she’s mapped out escape routes from her office at the main library in case someone opens fire.

“It certainly doesn’t help as a recruiting tool,” adds psychology professor Janet Frick, another vocal opponent of the law. She chairs the executive committee of the University Council, which voted to condemn the bill; so did the Franklin College of Arts and Sciences’ faculty Senate.

“While members of the university community—including faculty, staff and students—have asked questions about the new law, to our knowledge no one has indicated that they plan to leave the university,” UGA spokesman Gregory Trevor says.

However, The Mercury in Manhattan, KS reported that several professors are leaving Kansas State University because a similar law recently took effect there. Last month, the newspaper quoted one professor who is retiring, another who took a leave of absence to look for a new job and two more who are moving away and will teach classes online.

Last year, opposition from UGA faculty, staff and students helped convince Deal to veto the law. He signed an unusually lengthy and fiery statement accompanying the veto that laid out a long tradition of banning guns on college campuses, stretching from the Founding Fathers to a Supreme Court ruling by conservative Justice Antonin Scalia.

As they did last year, Gropp and a group of other local poets and writers organized protests and mounted a Twitter campaign to convince Deal to veto the bill again, but the energy seemed to have waned. Gropp attributes this to activists being spread too thin after President Trump took office. “I knew it was going to be really tough to beat this time around because of what people are calling ‘Trump fatigue,’” she says.

Still, phone calls to Deal’s office expressing opposition to campus carry outnumbered calls in support 100 to one. From the start of the legislative session in January to May 26, when Deal signed the bill into law, his office fielded 14,873 calls in opposition and just 145 in support, according to statistics obtained by the progressive political group Athens for Everyone through an open records request.

One local legislator, Sen. Bill Cowsert (R-Athens), cited strong opposition among his constituents as contributing to his decision to vote against the bill. Three members of Athens’ legislative delegation—Sen. Frank Ginn (R-Danielsville), Rep. Regina Quick (R-Athens) and Rep. Chuck Williams (R-Watkinsville)—voted for it. All three have said publicly that people should be able to defend themselves on campuses. One professor, Ginn said at a Federation of Neighborhoods meeting in May, told him she wished she had a gun when a large, angry-looking male student stormed into her classroom after class and frightened her. (The student, it turned out, was just looking for his phone, Ginn said.)

Some supporters cited a handful of high-profile shootings and robberies in and around the Georgia Tech and Georgia State University campuses in Atlanta. The UGA campus, though, is statistically one of the safest places in Athens, if not the state. There were no murders, no armed robberies and only three aggravated assaults on campus last year, according to statistics UGA reported to the FBI.

The University System of Georgia, the presidents of all 36 public colleges and universities in the state (including Jere Morehead) and many law enforcement agencies opposed the bill.

“I just think back to when I was in college and, you know, the amount of alcohol that flows there, I just don’t see that there is an upside to this,” Atlanta Police Chief Erika Shields told WABE, an Atlanta radio station. “I just think this really has the potential to really not be good.”

However, lawmakers included a number of exceptions in the bill that Deal had requested, convincing him to sign it. Guns are still illegal at athletic events and in fraternity and sorority houses, dorms, classrooms where dual-enrollment high-school students are attending class, faculty and administrative offices, disciplinary hearings and daycares.

But it was left to the university system to parse the law’s language and decide how to enforce it. (For example, does “athletic events” include tailgating? Spoiler alert: No, it does not.)

The Board of Regents office in Atlanta issued guidance last month:

• Only handguns are allowed, and they must be concealed underneath clothing.

• Guns are not allowed in Sanford Stadium, but tailgaters can carry them on campus.

• The exception for Greek houses only applies to those on university property; off-campus fraternities and sororities can opt to allow guns.

• “Offices” only includes offices themselves, not waiting areas or hallways.

•  Instructors are not allowed to announce if a high-school student is enrolled in a class; gun owners are supposed to check with the registrar before bringing a gun to class.

• Faculty and staff have been told not to ask whether a person who is armed has a concealed-carry permit; they’re supposed to leave any gun-related issues to law enforcement.

• UGA will not post signs outside areas where guns are restricted, nor provide gun lockers or other storage areas. (This has led to some fear that people will stash their guns in their cars, where they could be stolen, but Athens-Clarke County Police Chief Scott Freeman says he doesn’t see any cause for concern.)

The rules mainly put the onus on gun carriers to police themselves, which has some folks worried that they’ll ignore the restrictions left in place. “Just by the flow of what university life is like, [students will] be moving in and out of authorized and unauthorized space, and it’ll be very difficult to know if an area is authorized,” Frick says.

She doesn’t expect a sudden boom in the number of armed people on campus, although it’ll be difficult to tell if there is one. As for whether the law will have a chilling effect on academic debate, “that really depends on the number of people who bring legal guns onto campus and how they behave,” Frick says, pointing out that violent rhetoric and intimidation are still banned by the student code of conduct.

On the other hand, studies show that armed individuals are more likely to perceive a neutral situation as a threatening one, the psychology professor says. “Having a gun changes your perception of what’s going on around you,” Frick says.

Even with the clarification provided by the university system’s central office, questions remain. Some faculty and staff members have wondered whether, as employees, they can bring guns to work. (They can; the law applies to employees, students and visitors alike, and UGA can’t impose any additional restrictions, Trevor says.) And there are issues lawmakers never considered—for example, guns are allowed in laboratories, where explosive materials are sometimes stored, and an accidental discharge could kill dozens of people.

That’s just one reason why Gropp says the fight isn’t over, and she hints at potential legal action. “You haven’t seen the last of protesting over this,” she says, “because we have to ensure the proper regulations are in place.”