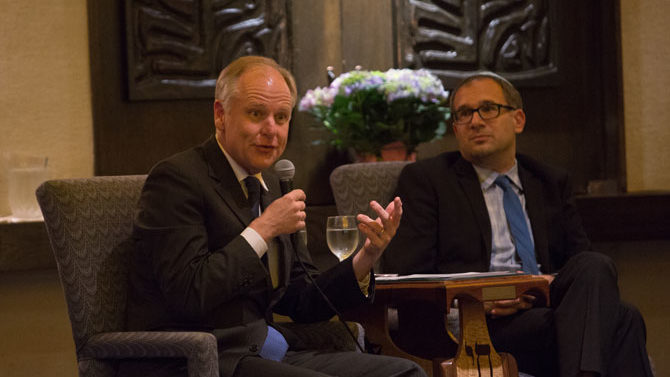 That was the message of unity from “A Conversation in Abraham’s Tent,” which recently brought together Imam Adel Amer of the Al-Huda Islamic Center, the Rev. Paul Baxley of First Baptist Church, Rev. Alison Eskildsen of the Unitarian Universalist Fellowship and Rabbi Eric Linder at the Congregation Children of Israel.

The four are members of the steering committee of the Interfaith Clergy Partnership of Greater Athens. It was clear from their banter with each other that they are friends. Earlier this year, the rabbi, the imam and Lutheran Bishop Julian Gordy had a discussion session at Holy Cross Lutheran Church.

For the Congregation Children of Israel event, Clarke County Superior Court Judge Lawton Stephens (a Presbyterian) moderated the conversation and asked first if there is a chasm between religions—and if so, how can one bridge it? Linder said we use power to build bridges of peace, while Eskildsen said her religion accepts other religious traditions. She doesn’t believe in one faith for all people. Baxley said that “divisions expressed as hatred and fear don’t please God.” Amar talked about the universality of Islam, saying that as a Muslim he believes in Moses, Abraham and Jesus, as well as Mohammed.

“We are under the same umbrella,” said Amar. “We all teach ‘Love thy neighbor.’”

Stephens then asked the panel how they reacted to a bumper sticker he saw that had a cross on it and the words “Truth not Tolerance.”

“Intolerantly,” Eskildsen said. Linder said he had recently returned from a conference of Reform rabbis where issues of tolerance and diversity were discussed, and the message was, “We have an obligation to operate in lanes of decency.” Baxley said he wasn’t “that guy,” the driver, and that he wanted to open himself up to more than tolerance—to beauty.

Amer referred to another event involving the Interfaith group, at which 600 members of his congregation attended First Baptist Church. “We are searching for harmony,” he said.

Stephens asked how the panelists felt about plans to build a wall and keep out “the other.” Linder told a story from the Talmud, in which one community was building a wall and wanted another to pay for it. Those close to the wall would have better security, the story goes, while the wealthy would have more to lose. Who should pay more? Then a character in the story ended talk of a wall when he said, “If we build a wall, we won’t be able to hear the screams of the needy.”

Moses with Pharaoh—that involved politics, said Amer. Joseph and the famine also involved politics, as did King Solomon. Amer said he believes you have to translate religion into action. Baxley said that with love, there is a way to embody a different type of politics and a way to model more loving political engagement. Eskildsen said religious doctrine can become calcified. She wants to separate codifying doctrine but leave the values.

The discussion turned to the commodification of religion. Baxley said Baptists “don’t have the luxury of competition.” Instead of crazy skirmishes, he would rather see compelling witness. Eskildsen said the question many people ask is “What is this faith going to do for me?” instead of “What am I going to do for others?” For Amar, the entire concept of competition is “weird” to him. There are two branches of Islam—Sunni, which is 90 percent of Muslims, and Shia, which composes 10 percent—with hundreds of different sects. He said he needs some uniformity and guidelines. A Muslim can’t choose to pray three times a day instead of the mandated five times a day.

Stephens’ final question asked how each panelist could convince an 18-year-old there’s hope. Where is it?

Eskildsen said she sees hope in the faces of her congregation, who want to spread love. Linder said he wants Judaism to be relevant to anyone, regardless of their age. Amer said there is no other option than having hope.

“We are all in the same boat,” he said. “Some people are trying to drill holes, and they’re going to sink the boat. If we don’t do that collectively, we’re sunk.”

Baxley said that it’s easy to see religion in many of the evil things that have happened in the world, but there are more examples showing people of faith doing good. God has delivered most when everything seemed hopeless.

“A Conversation in Abraham’s Tent” was presented by the Congregation Children of Israel as the Schwartz Symposium, established by Dale and Ron Schwartz to honor their parents, Florence and Sandy Schwartz.