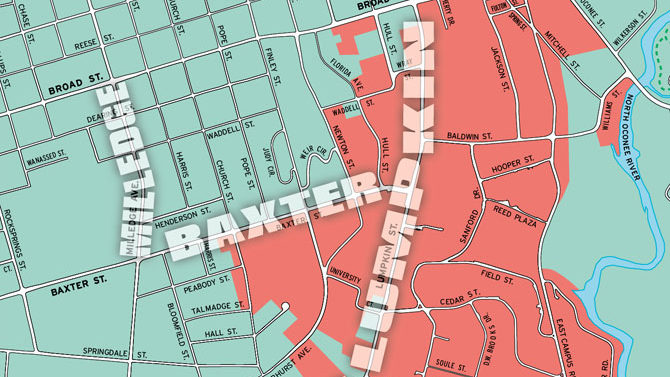 Athens-Clarke County officials have finally come up with a plan—albeit a modest one—to address some of the city’s most dangerous streets for pedestrians.

The ACC Transportation and Public Works Department identified the stretches of road with the most collisions involving pedestrians and cyclists—including portions of Prince Avenue, Dougherty Street, Lumpkin Street and Milledge Avenue—and added a portion of Baxter Street near the University of Georgia campus, as well. The first four exceed 50 crashes per million miles driven, which TPW Director David Clark termed a “reasonable threshold” for needing safety improvements.

Those roadways will be getting improved signals, crosswalks, bike lanes and other safety measures funded by $260,000 that’s already been set aside in this year’s budget for bicycle and pedestrian infrastructure improvements, assuming commissioners approve the list at their Oct. 6 voting meeting.

If it is approved, residents can expect to start seeing some of these improvements put into place by the end of the year, next August at the latest. “We think we can hit the ground running and start installing these pretty quickly,” Clark said.

Here’s a look at what’s planned, ranked in order of number of crashes.

South Lumpkin between Broad and Milledge

Thousands of UGA students cross this street every school day, making it both the busiest and the most dangerous pedestrian route in the city. High-visibility crosswalk markings laced with tiny, reflective glass balls will be installed at Church Hall and Baxter Street intersections. Church Hall will also get an island median and “sharks’ teeth” pavement markings alerting cars to yield.

Crosswalk signals will be reprogrammed at the South Milledge, Rutherford Street, Carlton Street, Cedar Street, Legion Pool and Wray Street crossings. At Baxter Street, pedestrians will be able to cross while cars are stopped in all directions, and cars will be able to move with no pedestrians in the roadway, as well. Signs warning drivers to watch for bikes while turning right at Legion Pool will be installed, too.

Perhaps the most visible change, though, will be a green thermoplastic coating on the bike lanes near Legion Pool. Green bike lanes are common in other cities, and there are a few on campus, but they’ve never been used on ACC property. “I think that’s a wonderful thing to see, that high-visibility green paint coming to Athens to highlight areas where motorists and cyclists really need to pay attention to conflict zones,” said Tyler Dewey, executive director of BikeAthens.

Prince between Pulaski and Milledge

Some of the plans for the locally controlled portion of Prince—it’s a state highway west of Milledge—are non-controversial, such as reconfiguring the island at the Hill Street intersection so that the crosswalk passes through it, rather than in front it. The one-way stretch of Pope Street might be reversed, too.

But between Pulaski and Barber streets, commissioners want to hold off on proposals to move the crosswalk at Newton Street, install an overhead flashing beacon there and update crosswalk signs. They want to wait until they see what Davis Property Group has in mind for the St. Joseph’s Catholic Church property (see p. 6). The Greenville, SC, developer will be conducting a traffic study and is expected to ask for specific pedestrian-safety improvements to accommodate the development.

“St. Joe’s is obviously a big investment,” transportation advocate Tony Eubanks told commissioners at their Sept. 15 meeting. “It’s so close, I think we ought to wait and see what’s going to happen there.”

Prince widens out into this five-lane road at Pulaski Street before turning into North Avenue at Thomas Street, and it has a ridge that makes seeing oncoming traffic difficult, so it’s no wonder it’s been dubbed the “corridor of death” by people who’ve tried to cross it.

More overhead flashing beacons are proposed for the Hull Street and Jackson Street intersections, as well as crosswalk-signal reprogramming and the aforementioned “sharks’ teeth” markings.

But that’s not enough for many commissioners, who’d like to cut out a travel lane in each direction, shrinking the not-particularly-busy road down to the three lanes. One cheap way to do that is to add on-street parking, which has the added benefit of slowing down traffic.

“I’m excited to see what improvements could exist there for passers-by, as well as Denny Tower residents, and residents who live on both sides of Dougherty Street and have to traverse it,” Commissioner Kelly Girtz said.

South Milledge between Baxter and Broad

The biggest change here is adding islands at three bus stops where UGA and Clarke Central students frequently cross. “I think we all either run, drive, bike, travel down Milledge all the time, and you frequently see students dash across the street,” Dewey said.

Commissioner Allison Wright referenced Grace Byrne, a then-Clarke Central student who suffered a severe head injury in 2013, when she was hit while crossing Milledge by a car that was avoiding traffic by speeding down the center turn lane. Refuge islands in the new crosswalks would prevent that from happening again, Wright said.

Baxter between Milledge and Lumpkin

Baxter, though it doesn’t meet Clark’s threshold, was added to the list because it’s intertwined with Lumpkin and Milledge. It would receive advanced pedestrian crossing signals at the Church Street and Finley Street intersections, serving primarily dorm residents.

In addition to short-term fixes, TPW identified longer-term improvements that can be implemented when money becomes available. They include a right-turn lane northbound on Lumpkin near Legion Pool to keep cars from turning in front of bikes; removing on-street parking from the four-lane portion of Prince to create a center turn lane, and adding bulb-outs to curbs to improve pedestrians’ visibility; and extending the sidewalk on Milledge to Clarke Central.