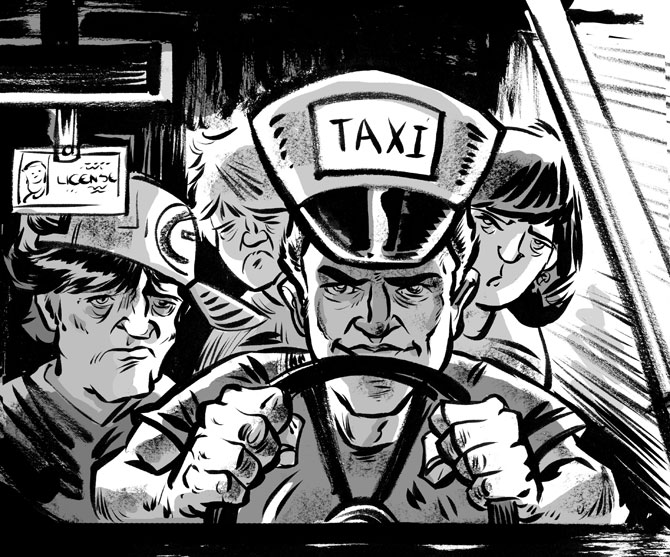 Story No. 1: I pick up a drunk college girl going from Washington Street just over to near Hancock Avenue and Harris Street. The standard fare for this is $5. This is the amount on file with the Athens-Clarke County Police Department. I charge her $4. She gets out, throws $4 at me, and calls me a “fucking piece of shit.” You’re welcome.

Try to fathom the amount of BS that your standard cab driver has to put up with. Who else (besides police and waitresses at Waffle House or the Grill) have to deal with the drunk kids after they have been kicked out of a bar? There are fights inside the van as you’re driving. Pray to God you have power locks, because at 2:30 a.m., downtown Athens looks like the scene in a zombie apocalypse movie, where you have the last functioning car and people are running and screaming at your van and beating on the windows and trying to open the doors while it’s in motion.

Not that I’m asking you to run up and hug a cabbie or buy black and yellow plastic wristbands showing your support for our cause. This is called honesty: A lot of cabbies are total assholes. At times, I was a total asshole. Typically, this happens because the customers are drunk, rude, demanding, impatient and show a complete lack of gratitude. If you’re cool to your cabbies, they will be cool to you.

Story No. 2: I pick up three college kids (two guys and one girl) going from Little Italy to a frat house off Milledge. One guy is completely rude, belligerent and uncooperative. At the house, the other guy and girl get out, pay me and everything is fine with them. I had assumed the other guy is with them. He is not. He grabs the girl by her wrist and drunkenly proclaims that I am going to take him and her back to his place, and he will not pay for the ride. I yell at him, make him let go of the girl and tell the couple to just go inside, because I am going to have a conversation with this other fellow. Back on the road, he continuously cusses me out and repeatedly tells me that he will not be paying for the ride and blah blah blah. I drive him to the Intramural Fields and kick him out, his well-being be damned.

Overcharging: Have I ever done it? Yes. Did I do it often? No. Do all cabbies do it? Well, they might have all done it, but many of us don’t do it on a regular basis.

Let me explain how the money works. Cabbies don’t get hourly pay. Cabbies don’t get benefits. Cabbies don’t get overtime. Cabbies get half of the fare, minus gas, plus tips. So if you take in $250 in fares in a night and spend $50 in gas, then the company gets $100 and you get $100, plus any tips you might have made. Now break that up over a 12-hour shift, and it’s not that much. Plus, you have to pay the company $25-$35 per week. Does your job make you pay $100+ month to work?

Nobody has ever gotten rich driving a cab. If it’s a slow night, a cabbie can spend all night scrounging for fares and go home with far less than minimum wage. Driving one person home for $5 means that cabbie gets maybe $2. The ability to pay our bills is directly related to how much in fares we bring in. If I overcharged somebody, it’s because they were like the guy in the above story.

Story No. 3: I get a call to pick up someone from Athens Regional Medical Center. As I pull in, a guy dives into the back seat screaming: “St. Marys! I’m at the wrong hospital! Get me to St. Mary’s!” The guy’s wife is in labor in the middle of the night. I run red lights and stop signs; I don’t bother to count the few dollars he tosses into the front seat; I explain as I speed across Broad Street that the main doors will be locked after hours, and he has to go in the emergency-room entrance; I come flying into the ambulance bay and wish him good luck.

I quit on graduation night, 2013 around midnight. I am driving a middle-aged woman and her son down the bypass when I hear her vomit a little in the backseat. When I ask if she has just gotten sick back there, she says “No.” I can see her in the rear-view mirror, shifting around in the seat like she is trying to wipe it up with her own butt. I drop them off at their hotel, go back to the office and turn in the cab and my money for the night.

I made very good friends with people I regularly picked up. I have unbelievable true stories. I made a living dealing with hookers, drug dealers, millionaires, alumni, mayoral candidates, college kids, lunatics and many more of the most amazing people on the face of the earth.

It was a wild ride for about three and a half years. I witnessed raw, unfiltered life first-hand that few others get to see. I’ve never regretted quitting, but every time I start to tell one of these stories, I still get a big smile on my face.