Inside the Republican Convention in Athens 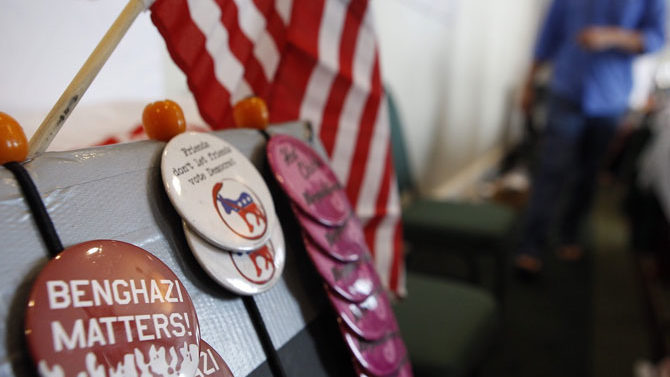 Poor Chris Christie. He came all the way from New Jersey to open the Georgia Republican Convention last Friday, and no one seems to care.

The buzz at the Classic Center is all about two other presidential candidates who may or may not make last-minute appearances, former Florida Gov. Jeb Bush and former Arkansas Gov. Mike Huckabee (neither shows up). Maybe no one’s wide awake yet, but the response as Christie takes the stage is as lukewarm as the coffee.

It soon becomes clear why: While Christie says he “can’t stand” Democrats, much of his speech is about how he won them over and works with them. He ticks off a list of accomplishments as governor: Winning majorities among women and Hispanics (traditional Democratic constituencies), helping to elect 31 GOP governors as head of the Republican Governors Association (including Georgia’s Nathan Deal), erasing an $11 billion deficit, eliminating more than 100 taxes and fees, vetoing Planned Parenthood funding and reducing the state payroll by 8,500. And he did it without “the luxury of a Republican legislature,” he says, before zinging the all-or-nothing tea party.

“You can’t stand in the corner and hold your breath and wait for the world to turn,” he says. “You’ve got to make the world turn.”

Six years after the tea party movement exploded and less than two years before a new president will take office, Republicans are still obsessed with taking down President Obama, but with the economy improving, they have less and less ammunition. “This president has led the most lifeless recovery in the post-World War II era,” Christie says. “People are saying, ‘I know you’ve created jobs, Mr. President. I have three of them.’”

The surest sign that Christie is auditioning for the job is that he’s tackling foreign policy. It’s all standard Fox News bluster: Obama is weak, which emboldens our enemies, and he’s not a friend to Israel. He let Assad off the hook in Syria and Putin run wild. 9/11! 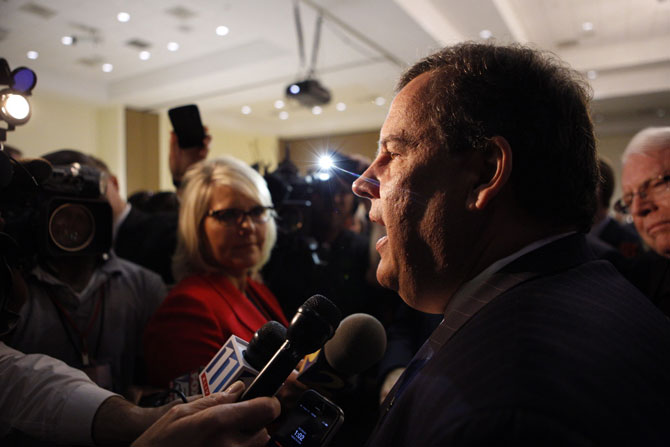 Christie is facing scandal after scandal back home—he spent an insane amount of taxpayer money ($82,000 over two seasons) on food and drinks at NFL games, and members of his staff might be indicted for misappropriating pension funds. From what I can hear stuck behind the TV reporters, though, no one is asking him about it. Instead, they’re pressing him on whether he’ll run for president. He’s noncommittal.

And he should be—in Georgia, he’s polling around 1 percent. The next presidential candidate to speak, Florida Sen. Marco Rubio, is more viable, although he may have killed his chances when he briefly supported comprehensive immigration reform (read: “amnesty”) before reversing himself.

Speaking in the Classic Center’s half-empty Grand Hall, Rubio skirts the issue of immigration policy as he describes his upbringing as the son of Cuban immigrants. He is living the American Dream, but says the dream is dying. “There’s no way my parents could live the lifestyle they did as a bartender and a maid in this new economy,” he says.

His solutions are mainly warmed-over policies from the Reagan years, like lowering corporate taxes. I don’t know whether it’s because he’s in a college town, but he spends a lot of time talking about vocational education and student debt, though he doesn’t really offer many specific ideas. One is a “right to know before you go” law, which would require universities to tell student-loan borrowers how much money they can expect to make. “So you can decide whether it’s worth it to borrow $50,000 to major in Greek philosophy, because the market for Greek philosophers has gotten very tight,” Rubio says.

Then he turns to foreign policy. Israel good; China, Russia and “radical Islam” bad. Like all the GOP presidential candidates, his philosophy is speak loudly and carry a big stick. Even the usually sedate Sen. Johnny Isakson gets into the act. “The only way to deal with ISIS is to kill ‘em, and the quicker we do it, the better off we’ll be,” he says.

Finally—and remember this part, it’ll come up again—Rubio says that, as president, he’ll appoint an attorney general who will “defend the religious liberties of every American to live our faith… not just at home or in church, but in our business, too.”

The real rock star is Texas Sen. Ted Cruz, famed for reading Dr. Seuss on the Senate floor during a faux filibuster against raising the debt ceiling. As Rubio wraps up, Cruz is arriving. Fanboys quickly corner him as other delegates pose for photos in front of a Fox News truck outside. 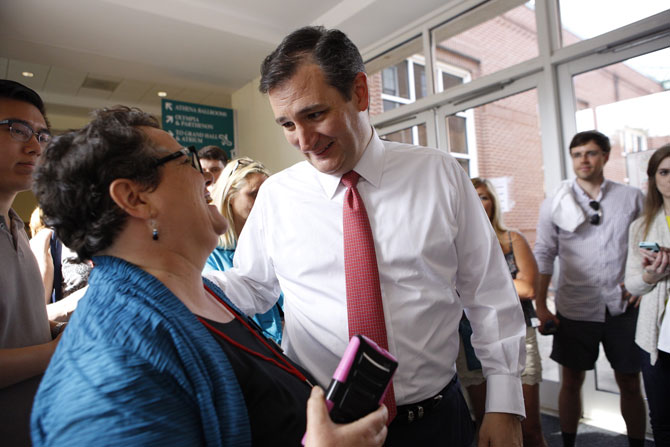 Ted Cruz speaks to a voter before his speech Friday night.

Earlier in the day, state party chairman John Padgett, a longtime Athens activist, had warned delegates that they’re not exactly in friendly territory: “You are in a bastion of socialism, communism and Democrats. This is the only county in the state that voted for Dukakis, the only one. This is a hard place for Republicans to be.”

And Athens is proving Padgett right. About 150 people have gathered in front of the Classic Center to agitate for Medicaid expansion. (Georgia Republicans have turned down Affordable Care Act money to insure an estimated 650,000 Georgias.) “There are people dying every single day just because we’re not expanding Medicaid,” says Tim Denson of the progressive group Athens for Everyone.

Denson and others march up and down Thomas Street, then go inside the building to deliver a box of letters. They’re chanting “Save Georgia lives!” and the delegates are chanting back “Save Georgia money!”

“A lady got up in my face screaming, ‘Get a job!’” says Athens-Clarke County Commissioner Melissa Link. “I said ‘I have one. I’m doing it.’”

After about 10 minutes, Classic Center staff and police ask the protesters to leave. The commotion dies down, and delegates start lining up outside the ballroom to hear Cruz’s dinner speech. 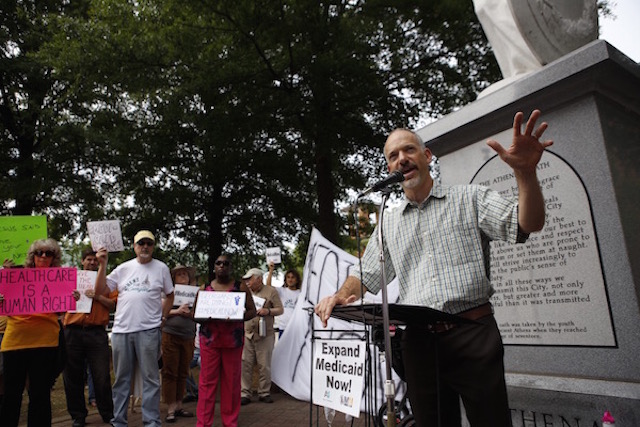 Pacing the stage with his sleeves rolled up, Cruz comes off as a cross between Jay Leno and a TV preacher. Everything has a punchline. He mentions that Hillary Clinton and Bernie Sanders, the socialist Vermont senator, are running. “Right now, the Democratic field includes a wild-eyed socialist with dangerous views on foreign policy—and Bernie Sanders,” he says. Cue the cymbal crash.

Cruz is by far the most extreme candidate we’ve seen today, and of course, the crowd loves him for it. “We should adopt a simple flat tax,” he says. “Let every American fill out his or her taxes on a postcard. And when we do that, we should abolish the IRS.

“Take all 90,000 of them and put them on the southern border. I say that tongue in cheek, but imagine if you were swimming the Rio Grande, and the first thing you saw was 90,000 IRS agents. You’d turn around and go home.” Cruz, it should be noted, is of Cuban descent and was born in Canada.

There are two types of Republicans in this post-Obama world: Those who still believe he’s a Muslim Kenyan usurper who is hell-bent on declaring martial law and locking up conservatives in concentration camps, and those who pander to them. When Cruz says we need to “repeal every word of Obamacare” and “repeal every word of Common Core,” you know that he knows that the Common Core curriculum isn’t even a federal law, and that getting rid of health coverage for pre-existing conditions and tax deductions for mortgages and children would, in reality, be monumentally unpopular. Dude went to Harvard. He knows better, but he says it anyway, because it appeals to the kind of people who wear Benghazi pins, forward chain emails and spend two days at political conventions.

Cruz gets his biggest applause when he addresses the controversial “religious liberty” bill that, depending on whom you ask, may or may not protect Christians from having to sell flower arrangements to same-sex couples when Obummer institutes, as Cruz calls it, “mandatory gay marriage.”

The rumor is that the convention’s 2,000 delegates will have a big fight on the floor over religious liberty. A committee has drafted a resolution calling on the legislature to pass a religious liberty without any protections against discrimination. It’s a bill that House Speaker David Ralston, questioning the need for it, given the First Amendment, bottled up during the last session.

Saturday, Ralston is booed. I wonder why. 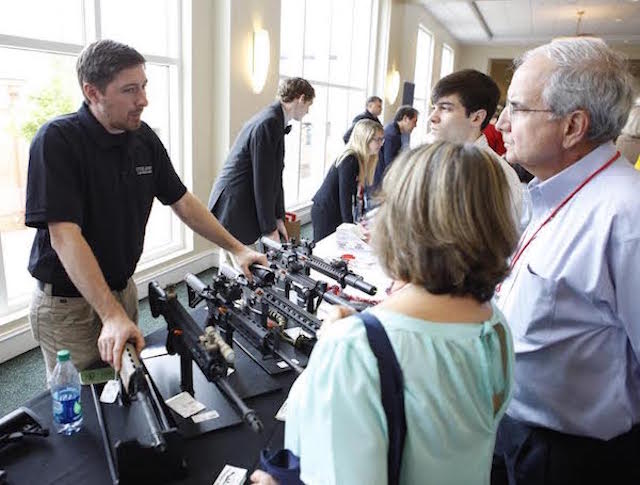 Throughout Saturday’s session, speakers plead for party unity. To paraphrase Jeff Mangum, we know who our enemies are. “No matter what team you’re on, I want you to go out and fight the Democrats and take back the United States of America,” says former congressman Jack Kingston, who introduces Padgett.

After a lunch of Chick-fil-A (what else?), it’s time to elect party officials. Padgett and a slate of establishment candidates are running against a group of upstarts, mainly young libertarian-ish newcomers to the party. The paranoia about Obama and Democrats among Republicans also extends to each other. The upstarts accuse the establishment of using “mafia-style” tactics. There are references to Stalin and Star Chamber. One candidate for vice chairman makes a big deal about the incumbent not shaking his hand. Another says she’ll do anything to fight Common Core, “even bake cupcakes.” Delegates spend an hour arguing over whether to vote by secret ballot because of fears of intimidation; some delegates, though, are afraid their ballots will vanish unless they vote openly.

“It’s 3:45 in the afternoon, and I would like to go home sometime before midnight,” says one gentlemen. The question is called. Padgett and the establishment slate win handily. The promised fight over religious liberty never materializes—all the resolutions are approved by voice vote. One takes aim at “radically revisionist” AP History; another calls for the state school board to be elected, rather than appointed, because members support Common Core. (They really hate Common Core, y’all.)

It’s a sneak preview of the 2016 session. Next year, look for those bills to come to a legislature near you.