Since the Civil War, East Athens Has Always Been a Battleground 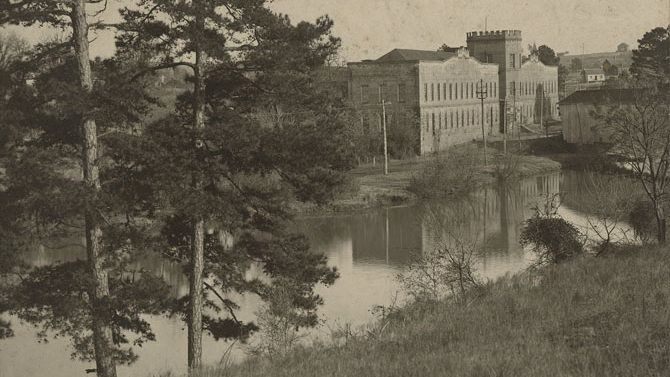 The summer of 1864 was exceptionally hot, and General William T. Sherman had driven into the heart of the South. The enemy was at the gates. Sherman’s right-hand cavalryman, Major General Stoneman, and his “Raiders” had been dispatched to attack Athens and destroy the Cook and Brother Armory, the premier manufacturer of the best rifles for the Confederacy.

Every able-bodied man of Athens between the ages of 18 and 45—and many both younger and older—had left town to fight. All that remained for home defense was a ragtag group of older Athenians and the small handful of workers at the armory. The bloodiest war in American history was at Athens’ doorstep, and ground zero was East Athens and its armory on the Oconee River.

The factories and mills that lined the North Oconee had made Athens one of Georgia’s most important cities, with Athens boasting nearly half the population of Atlanta at the beginning of the war. Athens was quickly becoming a manufacturing power and was on its way to challenging industrial centers up North. In 1864, the massive stone Cook factory (much of it still standing today as the University of Georgia’s Chicopee complex) was the crown jewel to be defended against Sherman’s marauders.

Athens was empty and quiet. The university was closed down. Virtually all the men were gone. Somebody had to step up to at least try to fend off the Yankees bearing down on East Athens.

Even back then, Athens didn’t march in lockstep to the beat of the Southern drum, and the home guard ended up being a largely uncontrollable, rogue, almost laughably harmless brigade with a name that sounds like a bad band. The “aged and infirm” men left in Athens formed themselves into the “Thunderbolts,” an absurdist scene of men over 50 (just slightly below the life expectancy at the time) whose antics resembled a feckless Food Not Bombs collective as much as a fearsome Confederate fighting force. The Thunderbolts shared much with contemporary leftist political philosophy in terms of organizational ethics. They rejected hierarchy outright, whether within the group or in regard to the Confederate government, which was held in some contempt by the Thunderbolts. It’s hard to tell if their principles were remarkably philosophically prescient or if they were just cranky, ornery old men who weren’t thrilled about all this.

The band of misfits “positively refused to follow orders from anybody,” writes Augustus Longstreet Hull, in his Annals of Athens. The men “recognized no superior officer” and named themselves the “Mitchell Thunderbolts” not after an officer but a colorful private, William Mitchell, affectionately known as “Slickhead.” Ol’ Slickhead was an ideas man. Ridiculous ideas, apparently. Hull’s account describes how “the originality of his suggestions made pastime of the perils of war.” They named themselves after the class clown, in other words.

A Frenchman who’d somehow ended up in Athens led drills that nearly every time would be halted for a “heated discussion,” as “each member retained in its entirety his individual liberty,” and could question and critique any proposed action or command. As a final drill, the Thunderbolts were to lie down, roll, then fire their weapons. After refusing, the company eventually reluctantly acceded. Hull describes the scene: “Some shot at each other, some at the ground, some at the trees and some at the sun. Such an indiscriminate mass of rolling humanity was never before seen.” 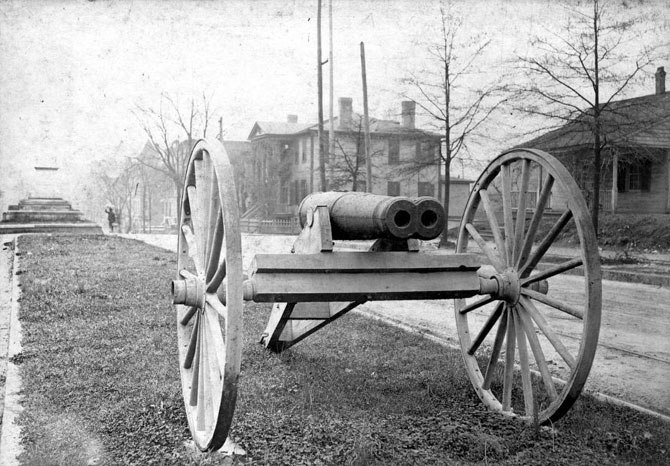 The double-barreled cannon on the median that divided College Avenue.

Such was the last line of defense against Stoneman’s Raiders. It is appropriate that one Thunderbolt, amateur actor John Gilleland, invented the group’s spirit animal: the grandiosely useless double-barreled cannon, perhaps the only weapon in history structurally guaranteed to miss the enemy—twice!—with each firing.

The motley group dug out a position atop the hill between what are now First and Second streets to defend against an attack on East Athens from the north. (The makeshift cannon emplacement still exists as a sunken depression on the hilltop.) A second position guarded against a southern advance a few miles down the river. In the end, no Thunderbolt rifle was fired, as a single cannon shot against Stoneman’s men at the southern defense convinced the Federal army of a lucky fiction that the artillery was “supported by a strong force.” Athens, unlike much of the wide swath between Atlanta and Savannah, was “secure from the torch of the invader,” recalled an Athenian years later.

Fables of the Reconstruction

Within a few years, East Athens came back to life, and the armory, shuttered since war’s end, reopened as a weaving mill. The new owner built more homes around the mill, and erected St. Mary’s Episcopal Church for the mill’s operatives. As many know, the church later became the location of R.E.M.’s first show and the living space of Michael Stipe and Peter Buck. Only the steeple remains on Oconee Street, persisting with its dual sanctity and, in the shadow of proliferating apartment complexes, with what seems like a sense of embarrassment at sharing its proud spire with the profane.

Post-war East Athens found itself at the strange juncture. The quiet idyll of farmland was met with the thrum and rumble of factories and railroads. Cotton farming had not made it as far north as Athens before the war, but now new agricultural techniques brought cotton northward, and made Athens one of the “chief inland cotton markets of the state” within a short time. Meanwhile, the area was pulsing with factories, and a trestle was bringing the railway across the river and into town. (For years, the rail line ended somewhere above Mama’s Boy, and cargo was quaintly pulled by mule toward Savannah.)

Cotton likely blanketed the big hill between modern-day First and Odd streets and back toward Triangle Plaza, which was largely shorn of its trees at the time. Cotton appears to have grown right up to the door of the old armory. An 1845 painting of the area reveals that the many trees of East Athens were not even saplings before the war. Photos from the late 1800s and early 1900s show farm plots where scores of houses would be in coming decades.

Simultaneously, the area just east of the Oconee was becoming a sort of shantytown for newly freed slaves who had fled their rural plantations to find opportunity and safety in Georgia’s cities. The population of Athens before the war was majority black by a slim margin, and it is likely that that margin ballooned with the influx. The newly freed Americans settling on the eastern banks of the Oconee, along what’s now Martin Luther King Jr. Drive, marks the beginning of the area’s more than century-long existence as a black neighborhood.

The black Athenians gathered in hovels along the river found themselves freed of bondage, but at the dawn of a century of white terrorism. White Athenians feared black uprisings in the years before the war, but now the fear was palpable. Abolition “propaganda,” as whites called it, had reached Athens by 1850. The fear was so great that an article ran in Athens’ Southern Banner before the election of Abraham Lincoln claiming that his running mate was a “Negro.”

Union League meetings began in the days after the war, meeting on Hancock Avenue across the street from what is now Little Kings, where Dawg Gone Good BBQ sits. Many black Athenians, both old and new, met with their few white sympathizers in what was described by racist whites as gatherings “characterized by dire oaths and frightful paraphernalia of skulls and cross-bones,” wrote Sylvanus Morris in his 1923 History of Athens and Clarke County. Hull wrote that “the Union League exercised baleful influence among the negroes, urging them to lawlessness and violence.” No evidence exists besides these recollections to suggest that the League pursued an insurgency or criminality of any kind.

But newly freed black Athenians were eager to enjoy the full privileges of their new citizenship. The University of Georgia reopened after the war, and young black men ascended the hill to demand education. They “prepared to seize control of the recently reopened institution,” wrote Michael Thurmond, in his A Story Untold, and as historian Ellis Merton Coulter described it in The Reconstruction of Georgia, “the motley group of dusky educational warriors… began to jeer their more fortunate white brothers.” But the black men were pushed back when white students fired on them.

Late in 1867, the group tried again, arming themselves with “sticks, clubs and every kind of weapon obtainable,” but were fired on again by students who still carried their guns from the war. It would be 94 years before black Americans would enroll in the university.

Black Athenians were bringing sticks to a gunfight. In the first years after the war, white power was hardening into an armed structure of subjugation. Hull described the quick emergence of the Ku Klux Klan in Athens, which was able to keep the Union League “in wholesome restraint, and had the situation well in hand by 1870.” The Klan was very active in Athens.

Athens’ black majority dominated in elections directly following the war, sending two black legislators to the statehouse. While one legislator was tolerated as a moderate, Alf Richardson, a firebrand, was described as “a turbulent and dangerous negro, advocating violent measures against the whites.” Multiple (white) historical accounts have Richardson dying in a fiery shootout with the Klan after the terrorists set fire to his house. An account written by a black historian, however, resolutely denies this narrative, asserting that Richardson went back to the statehouse until incipient Jim Crow laws made his electoral success impossible.

Richardson exists as a flickering phantom in history, appearing and vanishing like a character in Back to the Future. Did he die with a gun in his hand, heroically silhouetted by an inferno, or did he continue to fill his seat in Atlanta and retire comfortably as a pillar of black Athens? Athens was split almost evenly along racial lines, and after the war everything was contested. Even the very memory of a man became contested terrain, a place for fictive victories.

East Athens was a particularly contested space. Less than a century before, in 1786, a treaty with the Cherokee made the Oconee the border between white territory and that of the Creek nation. East Athens was white man’s land, and Native Americans controlled from downtown Athens to the Pacific Ocean.

In the postwar decades, East Athens was a bucolic battleground: The modern snarl of the factory and the railroads encroached on idyllic farmland. Athens vanquished the river with bridges and train trestles, only to have the Oconee frequently overrun its banks and claim yards, fill crawl spaces and threaten peace of mind, a muddy menace lapping against the floorboards. Up the east bank, black neighborhoods and white neighborhoods existed in uneasy proximity, with lines of demarcation, too, ebbing and flowing for the next century and a half.

Editor’s note: This is Part 1 in a three-part series about the rich history of East Athens.