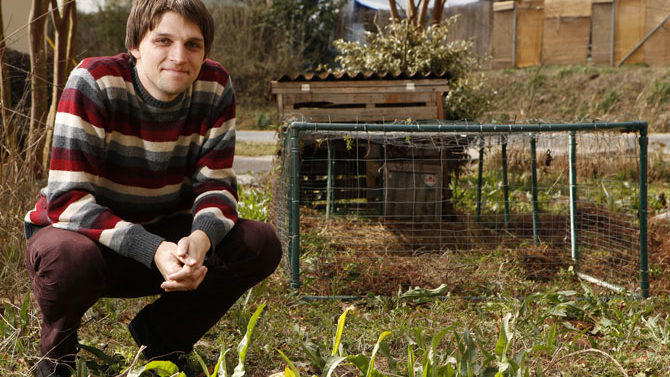 Athens-Clarke County commissioners have been pecking at the issue for years, but they’ve been too chicken to follow through: whether to let city residents own hens. Obligatory puns aside, the question took wing once again recently, when an East Athens resident cried fowl over a local ordinance excluding cluckers from the city.

Jonathan McCombs grew up in Dallas and attended college in Austin, TX, where chickens are legal. At St. Edwards University, he developed an interest in sustainable urban gardening.

“This is something I think is important to do,” McCombs said. “It’s grown out of frustration with conventional agriculture. It freaks me out, what I’m putting in my body, but I’m also not fortunate enough to be able to afford organic food.”

So, when he moved to Athens in 2013 to attend graduate school at the University of Georgia, it seemed natural to buy a few chickens to aerate the soil and provide fertilizer for the garden at his East Broad Street home (not to mention the fresh eggs).

“What motivated me was wanting to produce food on my lawn,” McCombs said. “Otherwise, I don’t really want to have a lawn.”

Athens, however, is not among the dozens of Georgia cities—including Atlanta, Alpharetta, Savannah and Albany—where urban poultry is permitted. A Community Protection Division officer noticed McComb’s chickens while citing him for leaving his trash cans out too long in September and gave him a ticket. Michael and Mary Songster—Cobbham residents who fought City Hall over their chickens in 2008 and are responsible for all those “pro-chicken” bumper stickers—put him in touch with Russell Gabriel, a UGA law professor and former public defender, who decided to ruffle some feathers and took on the case pro bono.

An ensuing hearing in December was about as odd as lips on a chicken. The prosecutor was trying to dismiss the case, but the defense wouldn’t let her.

Carrol Perrin, an assistant ACC attorney, told Municipal Court Judge Leslie Spornberger Jones that she wanted to drop the charge against McCombs because the chicken ban is unenforceable.

“I’ve never fought so hard to lose,” Perrin quipped, after an hour of sparring with Gabriel.

Gabriel asked for a ruling, arguing that Jones should strike down the law, because “it is so excessively broad, it would probably [only] permit a rock garden,” he said. “Otherwise, it prohibits plants and animals, at least by one reading of it.”

That’s an interpretation ACC Commissioner Kelly Girtz agrees with. “It’s written so broadly right now, it could be read as ‘I’m in violation because I have a peach tree in my backyard,'” he said.

The ACC code bans agriculture in most residential areas—everywhere except those few places on the outskirts of town zoned agricultural. Agriculture is defined as:

The production, raising, breeding or maintenance of plants and animals including, but not limited to: forage and sod crops; grain and seed crops; dairy animals and dairy products; poultry and poultry products; livestock, including beef cattle, sheep, swine, horses, or goats, game animals, exotics, fish, and any mutations or hybrids thereof, including the breeding and grazing of any or all such species; bees and apiary products; fur animals; trees and forest products; fruits of all kinds, including grapes, nuts, and berries; vegetables; nurseries; florals; ornamental and greenhouse products; or lands devoted to a soil conservation or forestry management program.

Gabriel thinks the definition was originally written to protect farmers from complaints by residents of encroaching subdivisions. But it has the effect of outlawing just about anything a homeowner might grow, from flowers to grass.

Jones sided with the prosecution, granting Perrin’s motion to dismiss the citation, thus avoiding ruling on the central issue.

“I don’t think anyone would think it’s appropriate for a prosecutor to move forward on a case it can’t do anything with,” she said.

The ruling thrust the issue out of the courtroom and into the realm of politics.

A Plan Is Hatched

Recognizing that the ordinance can’t be enforced, ACC Manager Alan Reddish directed the Planning Department to draft a revision. An addition to the definition of agriculture presented to the Planning Commission earlier this month includes trees, fruits, vegetables, flowers and other ornamental plants, but it doesn’t mention chickens at all. “That is the limit of what we were requested to do, and what we are providing to you tonight,” Planning Director Brad Griffin told the Planning Commission.

About a dozen intown Athens residents lobbied the Planning Commission to include chickens among the exceptions in the law.

“We have chickens at middle schools,” Mary Songster said, referencing the Clarke County School District’s farm-to-cafeteria agriculture program. “We’re teaching kids about this, and they can’t come home and actually do it.”

Her daughter, Maggie, said she learned where her food comes from when the family briefly owned chickens.

“I saw a connection to food I never saw before—never could see in the city,” she said. “We are so disconnected from our food.”

Nancy Hartness told the planning commission that chickens can recycle seven pounds of food scraps a month, and Flanders, Belgium even gave residents hens to reduce waste that goes to landfills. Anticipating a common criticism of chicken ownership, Hartness also said the loudest chickens get is 63 decibels—about the same as a human conversation and certainly less than a barking dog or a party next door.

But chickens can generate complaints, although citations are rare. Since the Songsters in 2008, CPD has ticketed only two people for violating the agriculture ordinance—McCombs and a Spring Valley man who kept a donkey as a mascot for a Democratic organization— according to documents Flagpole obtained through an open records request.

Some chicken owners, like McCombs, said neighbors didn’t mind at all, and many people are unaware that they have feathered neighbors.

“People started out, ‘Oh, chickens are gross, chickens smell,'” Pulaski Heights resident Gray Riley said. “It was remarkable how they turned around.”

Normaltown resident Harry Banko, though, said a neighbor who liked to sleep in once called CPD on him because his chickens were clucking at dawn, forcing him to give them up. “I was dumbfounded that this was even a problem,” he said.

One reason planning commissioners didn’t take up the chicken issue was that they anticipate controversy.

“If the ordinance involved chickens, people would be here in opposition tonight,” said Alice Kinman, a former ACC commissioner who now serves on the appointed board that recommends zoning changes to the Mayor and Commission.

The Planning Commission unanimously voted to send the definition of agriculture to the ACC commission as-is, sans chickens, while also signaling that they’d like to consider chickens separately. The need to clear up the ordinance was too urgent to wait, they said.

“You can have a bull in your front yard, and the county can’t do anything about it,” Planning Commissioner Jim Anderson said.

At least six ACC commissioners are on record as being in favor of backyard chickens, so it looks likely that they’ll be legalized at some point. But the process could take awhile. An ordinance would have to address how many chickens are allowed, whether people can keep noisier, more territorial roosters, how the chickens are treated, and what steps owners must take to keep chickens from bothering neighbors. The City of Atlanta, for example, allows up to 25 birds; they must be given at least two square feet of space, and coops must be at least 50 feet from structures on neighboring property.

Commissioners will discuss how to proceed at their Tuesday, Feb. 17 agenda-setting meeting. (A vote is tentatively scheduled for Tuesday, Mar. 3.) They could accept the definition of agriculture as written and keep chickens illegal; instruct the planning commission to write a separate ordinance dealing with chickens; write the ordinance themselves on the fly; or vote down the definition, which would de facto legalize chickens for the time being, because ACC has acknowledged it can’t enforce its ban.

“Where we go from here is to share what I’ve heard from the planning commission when it comes to us. I have to do my homework and listen to the conversation,” said Commissioner Allison Wright, an advocate for legalizing both chickens and beekeeping. “I’m more inclined to not vote for the ordinance so it comes back” after the planning commission clears up the status of poultry and bees, she said.

McCombs gave his chickens away after being ticketed, but if they’re legalized, he’s planning to get more. “I don’t know if I want to be doing this every six months—somebody coming by and messing with me for having chickens,” he said. “[But] overall, I’m very pleased with what’s happened so far. The only reason I have mixed feelings is I wish there had been a clear decision.”