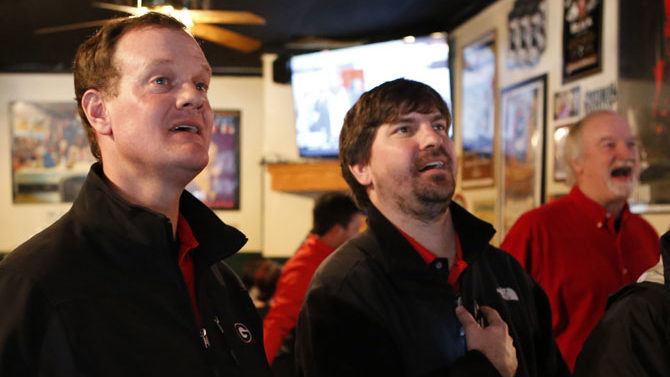 I stroll up to Blind Pig Tavern on Baldwin Street at 9 a.m. on Wednesday, Feb. 4, and the crowd of people extends out the front door, through the patio and into the parking lot. I’m walking, because the parking lot is filled to the gills. Some trucks are parked on the grass between the lot and the sidewalk. An SUV partially blocks the entrance.

Inside the Pig, a strange scene is unfolding that happens on this day in college towns across the country. The standing-room-only crowd of mostly middle-aged-and-older white men decked out in Georgia hats, polos, sweaters and jackets eat breakfast from an all-you-can-eat buffet, talk football, drink and allow the happiness in their lives to be dictated by an 18-year-old picking up a hat off a table.

It’s National Signing Day, the first day that high school football recruits can sign a National Letter of Intent, a document that legally binds a prospect to the school of his choosing. Signing Day has become somewhat of a pseudo-holiday in the college football world, thanks to a multi-million dollar recruiting-news industry and college football fans’ thirst for knowledge about who will be the Next Big Thing.

Blind Pig has been hosting Signing Day gatherings in conjunction with UGASports, a recruiting news website, since 2001, and in that time it has become the one and only place to go for Signing Day in Athens. It opens at 8 a.m. on Signing Day and serves a breakfast buffet and bloody marys. UGASports has analysts taking questions from fans in the middle dining room, while 960 AM the Ref broadcasts its annual Signing Day show from the back dining room.

“I don’t think some people understand how big of a deal college football is in the South until they come to a place like this on the first Wednesday in February,” Blind Pig owner Rob White says.

He says on Signing Day, Blind Pig does four times the business they’d do on a typical Wednesday, mostly thanks to the early morning crowd who skip work to drink and watch the big board where the names of all signees are written as they become official.

“When I got here at 5:30 in the morning, there were cars in the parking lot, people waiting to get in,” White says.

More than half the crowd is drinking this morning, and I have to think some of these people will be going to work at some point or another today. Sure enough, around 10 a.m., two guys order two shots of Jameson, close their tabs, and stumble out the door as one says to the other, “Let’s go to work.”

By 10:30, most of Georgia’s class is solidified. All the players who were expected to sign for sure have sent in their letters of intent to make them official Georgia Bulldogs. Now, the name on everyone’s lips is Roquan Smith.

Smith is an outside linebacker from Montezuma and ranked as one of the best linebackers in the country. He’s making his announcement on ESPNU and choosing between Georgia, UCLA, Michigan and Texas A&M. He’ll make his decision after 11 a.m. Fans gravitate to the many TVs in the Pig to find the best spot to watch the decision.

People are nervous. Tables filled with more than five men won’t utter a word for close to half an hour. They just stare blankly at the screen. Knots are probably growing in their stomachs. The line for the bathroom gets longer, either because they don’t want to miss the decision, or because  anxious stomachs are forcing them there.

As the decision draws near, a few folks begin to pace. One barks. Another screams, “Commit to the G!”

I am a Georgia alum and football fan, but I do not follow recruiting. And I can see how no outsider would understand these actions by grown men. But I do understand these people, because, not long ago, I was one of them.

It got worse in eighth grade when I discovered recruiting. It was another way to feed the insatiable appetite I had for Clemson football. I bought a subscription to a Clemson recruiting news service, and pretty soon, losses in a game weren’t making me as depressed as the loss of a recruit.

During high school, Signing Day became a holiday for me. In 2006, C.J. Spiller, a running back from Florida, was making his selection between Clemson, Florida and Florida State. The recruitment was intense. Clemson almost never got good players out of Florida, especially the ones Florida and FSU wanted, and Spiller was the best in the whole state. Clemson recruiting analysts said Clemson was in a good position.

I went to school that day, but I learned nothing. Spiller was set to decide in the early afternoon, so he dominated my thoughts all morning. I just dreamed about what he could do in a Clemson jersey.

That’s one reason I believe recruiting is so popular. It’s pure optimism. No one knows how these kids will perform in college. Most won’t become superstars. Some will be kicked out of school. Some will transfer. Some just won’t ever see the field. But during recruiting, every player still has a shot to be that one-in-a-million talent. Reality hasn’t been brought to bear against hope, yet.

I exploded out of my seat, shouted and ran around the office, index finger hoisted high. The coaches rushed in to see the commotion. They looked at me like I was a crazy person—I was a crazy person—and told me to get back to class. I didn’t touch the ground the whole walk back. C.J. Spiller picked Clemson!

Once I got to college, I stopped following recruiting. A lot of that was thanks to Spiller. And it wasn’t because he was a bust, like you might think. On the contrary, he’s one of the best players ever to play at Clemson. But during his time there, Clemson was decidedly mediocre. As good as Spiller was, and as good as some of the players around him were, there are just so many factors to making a good football team. How good are your opponents? How good are your coaches?

Spiller’s choosing Clemson was a high, but my time following recruiting was filled with many more lows. A player would pick another school over Clemson, and it would throw me into a depression. I would start to hate that kid and actively cheer against his team. Some time in college, I realized how sick it was to have so much disdain for a young person I’ve never met. I just couldn’t follow recruiting anymore.

Back at the Pig

By the time Smith is ready to announce, the Georgia fans at Blind Pig have had about enough. The announcement is pushed back from 11 to 11:20, and this kid is impeding their good time by being patient with the most important choice so far in his life. Folks aren’t happy. 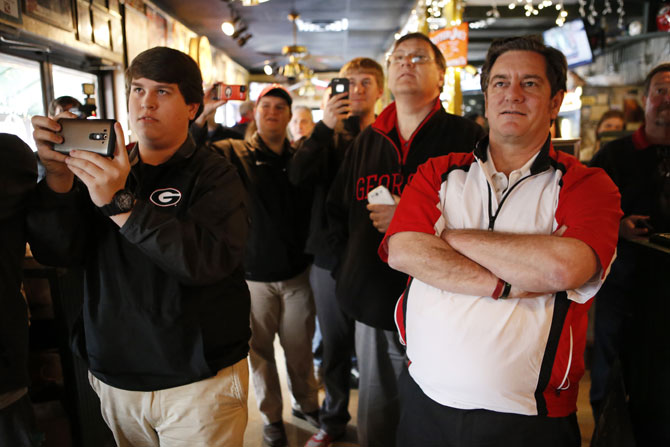 The scene at the Blind Pig on Signing Day.

Like most recruits who draw out the process to the very end, Smith has some fun with his decision. He has four placards on the table in front of him, each with the name of a school he’s considering. He quickly eliminates Texas A&M and Michigan then reaches under the table and starts rooting around in a box for roughly a minute. This really upsets the people of the Pig.

“Come on, jackass,” one man shouts to a round of hearty laughs.

As Smith takes his time, people start yelling and barking. Some chant “S-E-C.” The room is ready to explode, waiting for him to emerge from under the table with a UGA hat. But when he pops up, it isn’t red he’s wearing, it’s baby blue—UCLA. (Smith ended up not signing his letter of intent and is still considering UGA.)

I expect the crowd to boo, but that doesn’t happen. The first emotion is shock. The entire bar seems simultaneously to grab their beers and take a sip then reach for their pockets to look at their phones, to bash the kid on message boards and Twitter, or just because you need something to do when you receive a shot like that.

Then comes the vitriol. It’s hard not to assign racist motives to the middle-aged white man who shouts, “They gonna love you in Compton” to the young black man who just chose to attend school in Los Angeles. This is the reason I stopped following this stuff: the unnecessary hate thrown at people we’ve never met.

“I think he made a mistake,” says Mike Kennedy, who traveled from Clarkesville. He pauses and contemplates that thought for another moment, before continuing, more assured with his analysis. “He made a mistake.”

There is a strong duality in college football recruiting. It is both important and farcical at the same time.

The importance comes in the form of these kids making the decisions. Going to college is a big deal, and having it completely paid for is an even bigger deal. This whole process allows a lot of people to get a college education who may never otherwise have had the opportunity. And that can be fun and inspiring to watch.

“This is stuff they’ve dreamed about,” says Bobby Turner, who’s been coming to the Pig for Signing Day for a few years. “We’re seeing dreams come true.

And there’s lots of money to be made. The recruiting services sell subscriptions. ESPN sells ads. Blind Pig sells food and beer. The school sells tickets to watch these guys play. Everyone is making money.

Yes, they’re given scholarships, which may be worth something, but it’s not nearly the value these guys bring to their schools. Unfortunately, many players come to school and are driven toward majors that are easy and keep the player eligible, instead of a challenging major the student finds interesting. The University of North Carolina was found guilty of academic fraud due to the independent studies course that many athletes take, classes where students were given passing grades without doing any work.

These kids deserve to be paid for the money they make the schools when they get on campus, but people are making money off them well before that. And it all begins with National Signing Day.

Around noon, I left Blind Pig. I doubt I’ll be back next year.