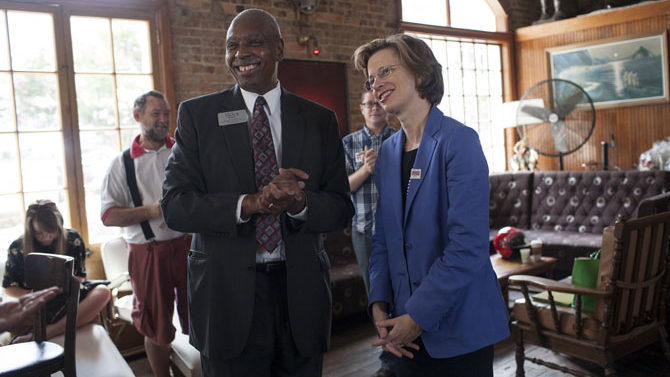 Ever since Republicans in Atlanta took Rep. John Barrow’s hometown of Athens out of his 12th District in 2004, it’s been virtually impossible for a Democrat to win our new home in the 10th. Democrats have tried conservative, gun-toting Democrats and liberal, latte-toting Democrats; both types lost to Rep. Paul Broun by staggering margins. Democrats threw up their hands in 2012 and didn’t even run a candidate, despite the benefit in driving up turnout of having President Barack Obama on the ballot.

Athens lawyer Ken Dious hopes to reverse that trend, running against Jody Hice, the candidate chosen by Republican voters to succeed Broun in the 10th. I sat down with Dious in his West Broad Street office to ask him about his campaign and his policy goals were he to pull off what would be a stunning upset.

Flagpole: Why are you running for Congress?

Ken Dious: I’ve been practicing law in this area that’s now the new 10th District for a long time. This district is sort of a strange district: It has a top-heavy population of Athens, Barrow, Walton County, and then you go down to the rural part, and I’ve practiced down in that area, and it’s relatively poor. Paul Broun, our congressman, didn’t do anything for the district, absolutely nothing.

And then I looked down at the nominees they had on the Republican side, and I said, “I guarantee you that it’s gonna be a runoff, and the Tea Party person, Jody Hice, is gonna be in the runoff.” And I said, “Jody Hice would not be the person to have to represent the 10th District.” So I said that I was gonna run and make sure the people in the 10th District get good representation. That’s what motivated me.

FP: What principal issues do you intend to focus on?

KD: I start off with jobs. Poor counties can’t sit there and wait until Caterpillar or General Motors are gonna move down to Putnam County. That’s not gonna happen. I think your congressman now is gonna really have to… be a leader in the 10th District to start some kind of economic development in those areas. Particularly with the new initiative, go green, stuff like that that’s going on now, some jobs we can develop. I’d like to see the rural development like the old Farmers Home Administration become more effective in creating small businesses in those areas. And make it work. Instead of becoming congressman, putting it in your back pocket and “see ya.” Some of those counties have never even seen Paul Broun. And Jody Hice, either.

A lot of those people in small counties, they’ll drive 50 miles to go to work. The school systems need to be brought up to par.

FP: You talk a lot about strengthening schools, which is an expensive endeavor, but you also favor a Balanced Budget Amendment, a very conservative idea that will limit our ability to fund things like schools.

KD: I have a balanced budget amendment in my own house. You better have one. I look at the federal government in the way I look at my own personal expenditures: I don’t think you can do everything at one time. Job creation and economic flow solves a lot of problems. If we create jobs down there, we can do both. Bill Clinton had a budget surplus. It can be done. At least we break even.

There needs to be a new approach to some things. Some things need to be changed. In the education system, the best way for it to be done is that we probably have to go to some small tax to take it off the property tax. Because property taxes do not create equal education. Poor counties don’t have the tax base. My philosophy on that is that then you can decrease the school tax. There would still be some property tax. And it would help some people, particularly elderly people. I’ve got clients right now that are up in age and can’t pay their property taxes. So they need some relief.

You can look at that disadvantaged right here. Eighty percent of the students at UGA are from North Atlanta. So then we have a great economic divide because of a lack of training and education. As a result, you have a big divide between the wealthy and the middle class, the middle class decreasing.

FP: Again, you speak of a great and growing divide between the rich and the rest of us, but you say on your website that “entitlement spending must be drastically curbed.”

FP: This is a tense and complicated time in the foreign policy arena. What are your views on America’s place in the world?

KD: That’s another reason I’m running. What we have now, this country is so divided by party and we’re over here acting like a bunch of gangs of schoolkids over here almost fighting a war between ourselves. And so Russia just says, “They can’t pass a bill. If I want to do something what are they gonna do about it?” ISIS says, “What are you they gonna do about it? They can’t do anything about it! They can’t even agree on how they would stop me. So I can just do what I want to do.” Like they say: The rat will play when the cat is away.

My competitor is just going to be a further obstructionist. That’s all he’s gonna do. That’s not me. I don’t care who suggested it. If it’s a good idea, it needs to get done. It’s childish, it’s really childish.

FP: Some of your positions are to the far right of the political spectrum, like the Balanced Budget Amendment and social program austerity, then to the progressive end, with ideas like Sen. Elizabeth Warren’s student loan idea.

KD: I’m a conservative person, particularly when it comes to spending. I’m a conservative person. I believe people should take their own initiative. You wanted to do what you wanted to do and not save, and you are now broke, and you want to blame me because you did not take care of what you needed to take care of. This is what I see every day in the real world as a lawyer, particularly among the young. I see it every day. It’s gotten worse over a period of time.

FP: Another progressive policy goal of yours is a raising of the minimum wage to $10.10 an hour. Absent that, I don’t see how a lot of people save like you urge.

KD: When Burger King and McDonald’s got started, it was always just a kid’s job. It was never intended to be a job for an adult, and then somehow it has worked its way into that, maybe because of the loss of jobs we’ve suffered from in this country. The United States now is a service industry. We’re not a base manufacturing country anymore, and that is what it’s come to.

I used to own a franchise when they raised the minimum wage. And the thing I did, I said, “Let’s be more productive.” I don’t think nobody’s going to raise the product cost because the minimum wage has gone up some. I think they can adjust to the minimum wage going up.

But you gotta remember, the minimum wage only affects 15 percent of the population, if that. Everybody else already makes more than the minimum wage. All of us now are making less money. We’re $6,000 less per capita income than we were 10 years ago.

The thing happening in this country is that we’ve got a great divide between the wealthy and the middle class. We need a new direction to correct some of that. But the wealthy just say, “I’ve got a house in Switzerland, I got one out in Colorado, I got one in Argentina. Country lines mean nothing to me at all, so I want to make as much money as the sheik.” And I have no problem with that.

FP: Do you think you can win in November?

KD: This district is a new district. This is not the same district Paul Broun ran in. And most people do not know that. Nobody knows what the district’s going to do. [Editor’s note: The 10th changed slightly in 2012, losing some of the North Georgia Mountains and adding territory in Gwinnett County and Middle Georgia. It’s still 63 percent Republican, according to Cook Political Report.]

The young vote is a real struggle—between 18 and 40. Are they listening? I don’t know. Are they going to vote? I think if they go vote, I’ll win. If they don’t, I’m going to struggle.

What I want people to do before they say, “Ken, you don’t have a snowball’s chance,” don’t sit in Atlanta and tell me that. Before you say that, you need to go down there and see what’s going on. Don’t prejudge the election, because it’s a new district. I think a Democrat can win.

Jody Hice represents an interesting question for the Republican Party. If he goes to Washington, he’s going to hurt them nationally. He’s going to hurt them nationally for the presidential election. Are the women going to vote for Jody Hice after the things he said about them? Is the gay community going to vote for him? Those are interesting questions. But the bigger question is, do they know who Jody Hice is? Do they know who I am?

With Jody Hice in Washington and the current administration, you can just write the 10th District off, not getting anything. And so if that’s what you want, vote for Jody Hice. It’s just that simple. We’re not going to get any real concessions out of Washington with Jody Hice there.