Oconee County Spent Money for Preservation on a Subdivision Bridge 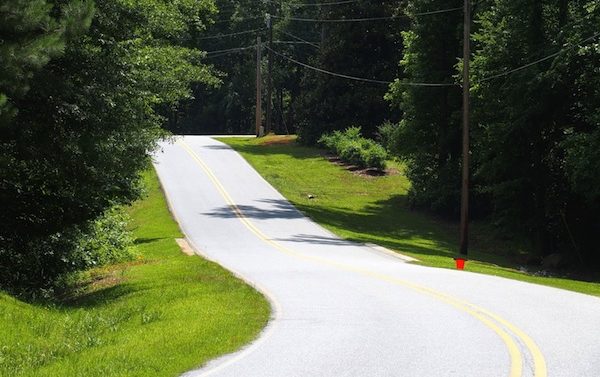 In March of 2009, voters in Oconee County overwhelmingly approved a 1 percent Special Purpose Local Option Sales Tax referendum setting aside $1.1 million for spending on “recreational, historic and scenic facilities” in the county.

More than three years later, in May of 2012, the Board of Commissioners voted unanimously to spend $90,000 from that “recreational, historic and scenic facilities” category of SPLOST 2009, with most of that money going to replacement of a damaged “bridge” in Northwest Woods. The “bridge,” a subdivision amenity, did not span anything, but rather sat on cement pads where Robin Hood Road passes over a buried culvert.

Some unspecified part of the $90,000 SPLOST allocation approved as part of the fiscal year 2013 county budget was to go to renovations at Heritage Park, where Oconee County has a group of historic structures gathered from around the county and has a plan to create an outdoor museum using those buildings.

So far, it has spent only $5,600 from SPLOST 2009 for that purpose. That money went to repair the front porch of one of those buildings—the old school house—so it was safe for park personnel to enter the building. The school house itself is rarely open to the public, and the outdoor museum is little more than a plan and a collection of old, unrestored, relocated buildings.

Sometime in 2008 or 2009—Public Works Director Emil Beshara wasn’t sure of the year—something hit the wooden structure built over the culvert on Robin Hood Road in Northwest Woods. The assumption is that the damage to the “bridge” was done by a truck, but there is a dispute over whose truck did the damage. Beshara said he is pretty certain it was not a county truck or even that of a contractor for the county. The bridge was so badly damaged that it was torn down and removed.

According to both Beshara and County Administrative Officer Jeff Benko, one person, a “Mr. Malcom,” has asked that the “bridge” be restored. George and Paula Malcom live in a home at the corner of Bowman Lane and Robin Hood Road. The covered “bridge” used to be at the edge of their property in a low spot on Robin Hood Road. The wood structure, designed to resemble a “covered bridge,” was built as an enhancement of the 1970s subdivision, according to tax records.

The Northwest Wood amenity—it was referred to as a “bridge”—came up for discussion at the BOC work sessions on Mar. 3 and May 21. Both sessions were set up so the commissioners could discuss projects to be included on the SPLOST 2015 referendum.

At the Mar. 3 session, Gentry said the board had allocated $75,000 for the “historic bridge at Northwest Woods.” Commissioner Margaret Hale expressed surprise that there was a “historic bridge at Northwest Woods,” and Finance Director Wes Geddings quickly said Gentry should have said “scenic” rather than “historic.” Several others, including Chairman Melvin Davis and Commissioner Mark Saxon, repeated the word “scenic.”

“That’s really stretching it,” Hale said. She said the Board had talked about taking the money out of SPLOST revenue, but she said she didn’t think it was coming from the “historic, scenic” category. Benko said that was “the only place we had” to get the money in SPLOST 2009.

The “bridge” at Northwest Woods became a topic of discussion, because Page once again asked for money for “historic and scenic properties” as part of the SPLOST 2015. At that meeting on Mar. 3, the Board made a tentative decision not to allocate money for that purpose, since Gentry still has money left in SPLOST 2009 that could be used for historic and scenic preservation.

When, at the May 21 work session, the Board reviewed its Mar. 3 decision not to fund “Historic And Scenic Properties” in SPLOST 2015, conversation again turned to the “bridge.” This time, Commissioner Hale was joined by commissioners John Daniell and Jim Luke in challenging Administrative Officer Benko on spending $71,000 for “the bridge.” They claimed they had authorized about half that amount. Chairman Davis agreed. “Did we just write you all a blank check?” Hale asked.

The county has taken no action on a $71,000 bid it has received for replacement of the “bridge” on Robin Hood Road. Benko, in his comments at the May 21 meeting, blamed the cost escalation on the need to put guard rails around the “bridge” to meet state standards.

Beshara told me June 13 that he was the one who stipulated that guard rails be put up around what he called a “false, wood, covered bridge.” He also called it a “gazebo.” Beshara said he was opposed to replacing it, but if it is going to be rebuilt, he wants “it to be protected” from traffic on the roadway.

Work on the project is on hold, he said, because the bid, from DSI Design Group Construction of Athens, did not specify how it will move and protect county water lines when DSI puts in the guard rails. Beshara said he has asked for a clarification but has not received a response.

The intergovernmental agreement contained a listing of the projects to be funded by SPLOST 2015 and the amounts of money to be allocated to each project, with a projected $55 million in revenues as the base.

The BOC has not yet passed a resolution asking that the SPLOST 2015 referendum be put on the ballot in November. It is expected to do that in August. The tax will extend the current sales tax, which adds 1 percent to the cost of purchases in the county.

It is unlikely voters will see the details that would allow them to know how much money is to be allocated to either parks and recreation or historic and scenic preservation should they approve the tax. What voters saw on the ballot in 2009 was a listing of the expected revenue ($40.4 million) and a list of “purposes” for the tax. Included was the category “recreational, historic and scenic facilities,” but no amounts of money for that or for any other of the listed projects was included.

The resolution passed by the board putting the issue on the ballot did list amounts and percentages of the projected $40.4 million to be collected to be allocated to the list of projects to be funded by the tax. The resolution, however, was not what voters saw on the ballot.

That resolution, for example, listed the $1.1 million figure for “recreational, historic and scenic facilities,” which also was listed as 3.2 percent of the amount projected to be collected for county projects.

Knowing those actual spending figures and percentages has been of little value in understanding how the money from SPLOST 2009 actually will have been spent. Not only did the county spend no money on historic facilities—except for the $5,600 for the porch of the schoolhouse—and classify a wooden building built as an amenity for a subdivision as a “scenic” site, but it also decided to shift money around within the categories of projects.

At its May 6 meeting, the BOC voted to take $2.1 million from water and sewer projects and to allocate that money to pay off debt on the county jail. County Attorney Daniel Haygood told the board this was possible because SPLOST 2009 is expected to bring in only about 80 percent of the $40.4 million projected. The board cannot eliminate any project categories, Haygood told the board, but the shortfall gave it leeway in deciding how to spend the money it has received, such as reducing funding in one area and moving money to another.