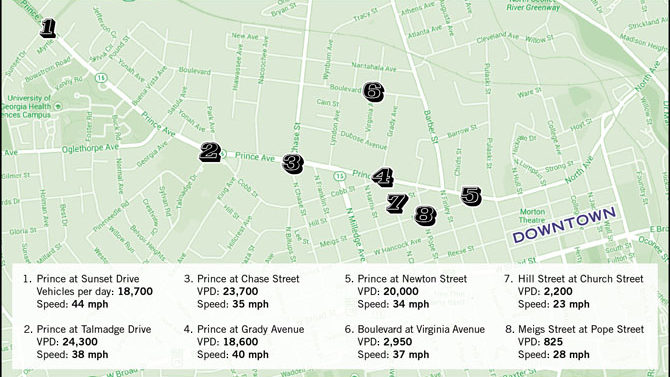 The Athens-Clarke County Mayor and Commission finally held a long-awaited work session Tuesday, June 10 to consider options for crossing Prince Avenue without taking your life into your own hands. But after waiting for more than a decade, pedestrians will have to wait several more months, at least, before finding some relief.

ACC traffic engineers gathered data over two weekdays at various points along Prince and several side streets. Coming east into town, traffic is fairly light and very fast (15 percent of cars travel at least 10 miles per hour over the speed limit) around Sunset Drive, then becomes much heavier after Oglethorpe Avenue. As cars turn off onto Milledge Avenue, it becomes lighter again, then a bit busier on the last stretch before hitting downtown.

Although most traffic was moving at or below the 35 mph speed limit at three of the five points ACC measured, it gets much faster at night, Clark said. “As less traffic is on the corridor, speeds certainly increase,” he said.

Slowing down traffic dramatically improves a pedestrian’s chances of surviving being hit by a car. At 40 mph, the odds of death are 85 percent, but that drops to 35 percent at 35 mph and 5 percent at 20 mph.

Overall, traffic ranges from 18,000–24,000 vehicles per day and averages 20,000—the threshold for an effective road diet, according to ACC, although other cities have successfully done three-lane configurations on much busier roads. Traffic on other local roads that have been successfully switched from four travel lanes to two with a center turn lane—including Milledge Avenue, Lumpkin Street and Baxter Street—see about 13,000–18,000 vehicles per day.

In general, traffic moves fastest on the widest parts of Prince, where there are the fewest curb cuts, such as the areas alongside Piedmont College and the University of Georgia Health Sciences Campus, Clark said.

While efforts to improve Prince over the years have mainly been focused on pedestrian safety, traffic statistics over the past five years reveal that it’s actually not particularly dangerous for pedestrians and cyclists. There are 0.4 pedestrian-related crashes per million vehicle-miles and 0.3 bike-related crashes, which is “about what you’d expect it to be,” Clark said. However, there are 10 car crashes per million vehicle-miles, “considerably higher” than what traffic engineers are shooting for, he said. Surprisingly, the most wrecks, 46, occurred at the signalized Barber and Finley street intersection.

Out of the three mid-block crosswalks, the one at Newton Street in front of The Grit is “by far” the busiest, with 15–20 people crossing per hour on average. But only 4 percent of crashes on Prince happened at mid-block crosswalks; the rest were evenly split between signalized and unsignalized intersections.

One of Prince Avenue’s challenges is that the width of the road varies widely, from 42 feet (barely enough for four lanes) at Pulaski Street to 78 feet at Hawthorne Avenue. As a result, a one-size-fits-all solution won’t work. “It’s not impossible to overcome, but it’s not simple,” Clark said. “What works on one block section is not necessarily going to work on another block section.” 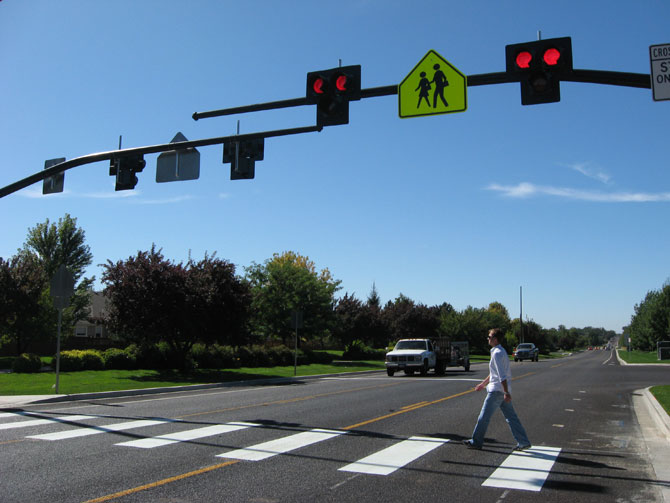 Clark ran through a variety of options for improving safety. The simplest (and cheapest) would be textured crosswalks, which cost $7,000–$10,000. “We’ve been doing that very successfully lately around our schools,” Clark said. But while textured crosswalks are more visible to drivers during the day, they’re harder to see at night than the painted variety, and they’re considered primarily an aesthetic improvement, he said.

Relocating the crosswalk at The Grit to the other side of Newton Street (at a cost of $10,000) would make it much easier to see because the roadside beacons and pedestrians waiting to cross wouldn’t be blocked by utility poles and stopped cars. “There is a lot of clutter” at the current location, Clark said. Mayor Nancy Denson blocked commissioners’ efforts to move the crosswalk earlier this year, even though Clark recommended it, but she sounded open to the idea at the work session.

Another option for improving visibility is an overhead flashing beacon, which costs $20,000–$30,000.

A HAWK signal would take it one step further. HAWK signals—used in other parts of the country and abroad but just recently approved in Georgia—are essentially traffic lights at crosswalks. A pedestrian would punch the button, and the signal would turn from blank to yellow and then red for a few seconds, telling drivers to stop and allow the person to cross. They have to be mounted on arms, not wires, so they cost $40,000–$70,000, and drivers would need some education, Clark said. “It’s not intuitive,” he said. “It’s a traffic signal but doesn’t have a green indication.”

Funding could come from $60,000 in unspent funds for crosswalk improvements or SPLOST funding earmarked for Safe Routes to School and road and bridge projects—although the latter would involve taking money away from other planned projects.

A three lane configuration—at least along the 0.6 miles between Pulaski Street and Milledge Avenue that’s owned by ACC—is “certainly still a possibility,” Clark said. But he would prefer to wait until 2018, when the street is due for repaving, because otherwise the current markings can’t properly be ground off.

There was virtually no discussion at the work session of a road diet or the proposal by Complete Streets: Prince Avenue to conduct a demonstration to determine if narrowing the road and adding pedestrian refuges will clog traffic. “In my opinion, the benefits of road diets were too quickly glossed over, and their challenges were exaggerated,” said Tyler Dewey, executive director of BikeAthens.

A marked crosswalk or pedestrian island alone isn’t enough, Dewey said, noting that 15 percent of Prince-area residents walk to work and 5 percent bike, according to the ACC Planning Department. “People along the corridor are already shifting modes [of transportation],” he said. “Promoting walkability and cycling on Prince Avenue would continue to shift people into multiple modes, but only if the street configuration is more accommodating of other modes of travel.”

The state Department of Transportation is conducting a safety audit on its portion of Prince (from Milledge to the bypass) in September. Mayor Nancy Denson and commissioners told Clark to work with GDOT on that study and, at the same time, come up with a set of recommendations for the locally owned stretch of Prince. Making changes to the intown part of the street before GDOT acts could have unintended consequences, Clark said.

Commissioner Kelly Girtz told Clark he wants to see a “comprehensive” plan with options and funding sources for both the short and long term. Commissioner Kathy Hoard urged him to dust off the 2004 Community Approach to Planning Prince Avenue report,

Manager Alan Reddish told commissioners that he will evaluate how much staff time and money that would cost and bring them an agenda item for approval early this fall.

The GDOT report will be ready a month or two after the audit is done, Clark said.