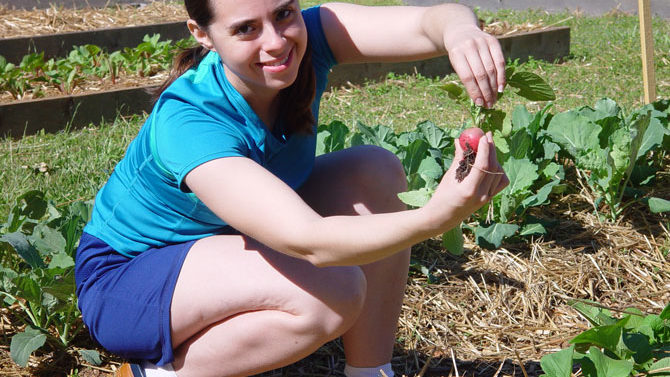 This planting season has seen at least two local community gardens sprout skyward—one in Winterville and the other off Prince Avenue.

Tomato plants, okra seeds and various other veggies found a new place in the sun Saturday, Apr. 26, as participants at Pittard Park delved into dirt work that initiated the Winterville community garden’s first growing season. The project serves two purposes: It provides a place for neighbors to combine labor, as in an old-time barn-raising, with the goal of producing fresh, unprocessed vegetables for the town’s needy. The project also provides garden spaces for rent, where renters can plant and tend within a chemical-free growing environment to supply their own tables.

Landscape architect Josh Koons, who is working with the City of Winterville to design Pittard Park improvements, laid out the garden as one parkland enhancement. Koons’ design includes drip irrigation for each garden box and timer-controlled watering in the morning and evening. The Winterville City Council has backed the project with SPLOST funding for materials and design. 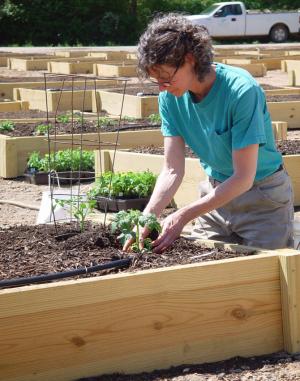 Volunteer Linda Russell gets a tomato started in one growing box among a multitude at the Winterville Community Garden.

As soon as most of the irrigation system became operational last month, word went out for a first planting the next day.

“I sent emails and phone calls yesterday,” Barry Scott said on the Saturday morning that planting began. Scott and Traci O’Brien co-chair the steering committee that organized the garden project. Scott’s Friday communication brought out several place renters, most with tomato plants raring for pay dirt. “Our first planter today was Jack Hanes,” Scott said. “I think he was here about 9:30 [a.m.] And he was ready to plant.” Hanes placed his Better Boy-variety tomatoes where they could stretch out and grow.

Patsy Hinson planted beans, zucchini, tomatoes, lettuce, spinach and an Irish potato brought from her cupboard. Her goal, she said, is a naturally-grown table supply, free of the chemicals commercial growers apply. Linda Russell concentrated on tomatoes in her space, half of a growing bed shared with a friend. Athens resident Donald Fowler had tomatoes, okra, onions, squash and cucumbers in mind for his patch. “And one marigold,” he added. More than pretty, a marigold planted near a tomato helps discourage a bug from biting into your harvest before you can. Planter Brenda King put in beets, arugula, basil, onions and some sweet banana peppers—all of that in addition to two kinds of heirloom tomato: Homestead and Mr. Stripey. King also planted a plastic pinwheel, something to identify her planting box amid the sea of similar boxes.

This garden in boxes—about 80 altogether—covers most of an acre beside Winterville’s downtown firehouse and recycling center. Soon, gravel topped with mulch will cover paths between boxes. A three-rail wood fence ultimately will enclose the garden space, backed with fence wire to discourage ground-level varmints.

Volunteers christened the feed-the-hungry boxes with numerous plantings on the same day as the rented boxes. Volunteer JoAnn Snow furnished several tomato plants started from seed. Snow also provided pepper plants—some hot, some mild. Don’t plant the two varieties close, came the instruction, or the mild ones go hot as well. That is by cross-pollination, not peer pressure, it was explained. The things you can learn in a garden.

Not every renter who reserved a box was present that Saturday. “Some people couldn’t come out today, of course,” Scott said. “All they have to do is call us, and we’ll get them set up with planting and water and irrigation.” Planters saturated box contents, using a long garden hose and watering wand, before dipping divots in the surface to accept small plants.

That first planting day, volunteers installed irrigation drip lines as plants met dirt. Activity drew in the curious—passersby wanting to know the purpose of the project and the way to become involved. “We have 80 boxes, and we’re looking to rent about 70,” Scott said.

Box rent is $15 per season. Participation is not restricted to Winterville residents. “Everybody’s welcome,” Scott said. “The more, the merrier.” Application forms and garden rules can be downloaded from cityofwinterville.com by following the community garden link in the left margin of the webpage.

Into its third planting in as many springs, the community garden at Young Harris Memorial United Methodist Church in Athens occupies the same site as the earliest garden club in the United States. A state historical marker at the corner of Chase Street and Prince Avenue (one corner of the expansive church campus) places that earlier meeting of soil-amending minds around 1891. “A few of us kept looking at that sign and thinking, ‘Well, there’s nothing that grows there now but grass’,” recounted Allison Floyd, on staff at the church.

Floyd spearheaded the church’s community garden in 2012 with UGA agriculture student Daniel Tinsley. A group of church men built wooden boxes that year to house a raised garden. “We built the little garden and invited people from the neighborhood to come garden,” Floyd recalled. The idea, she said, was to make productive some otherwise fallow land. The garden would also serve as an access point, she explained, a way to dispel any members-only aura from the church campus, a setting of wide lawns and massive buildings.

A church lawn vegetable garden is maybe like a collard patch beside the governor’s mansion: disarming and refreshing at the same time. The garden at Chase and Prince includes collards for one-third of a row. “We want everybody to feel comfortable here,” Floyd said. “We don’t want people who are agnostic or go to church somewhere else to think that they are not welcome here or can’t be a part of this community.”

The garden’s first year saw a half dozen participants. The second year, a church women’s group upped money to add more garden boxes. This year brought something of an epiphany: Young Harris Pastor David Wofford entered talks with Erin Barger, director of Action Ministries, the group that operates the Athens soup kitchen Our Daily Bread at First Baptist Church downtown. “David and Erin started talking about how we could work together to use that garden to provide fresh fruits and vegetables for Our Daily Bread,” Floyd said.

Next, Wofford applied for a Methodist grant called Peace with Justice. “We got $1,000,” Floyd said. “We were able to till and buy seed. We installed a drip irrigation system. And a sign, ‘One Community Garden.’”

The sign emphasizes inclusiveness, Floyd said. “Churched and un-churched; rich and poor—we wanted a name that said that. We wanted people in Cobbham to feel comfortable here and people from Our Daily Bread. We have people who are patrons of Our Daily Bread who eat lunch at the soup kitchen and come out and work with us.”

Under the newly established cooperative, Floyd represents the church, and Drew Hooks represents the soup kitchen. Hooks works for Action Ministries. He knows about growing vegetables and about what is needed at the kitchen, Floyd said. “It wouldn’t make sense for us to grow a whole lot of something that they couldn’t use then,” she pointed out.

The expanded effort has also moved the project outside the box. The bulk of planting this season is in freshly tilled ground laid off in crop rows, not in raised garden beds. “We rented a tiller at Lowes,” Floyd said. “It took us two or three times to find the one that would dig deep enough.”

The first harvest for use at Our Daily Bread was radishes picked Saturday morning, May 3, by volunteer Julia Jones. Those will store in a church refrigerator until Hooks transports them to the soup kitchen, Floyd said.

The garden invites participants to donate labor in the rows that feed the soup kitchen in exchange for a spot in a garden box, where they can grow their own vegetables. To participate or for more information, email garden@yhmumc.com.

As Floyd weeded a box with volunteer Nancee Tomlinson, she schemed toward a shared harvest of arugula and cucumbers. Was there ever such faith in a benevolent future as where fingers poke seeds into freshly turned earth? “The way I feel about it is the plants are beautiful,” Floyd said, “But the experiences, the company, gardening together is what it’s all about.”