Thinking Outside the Box 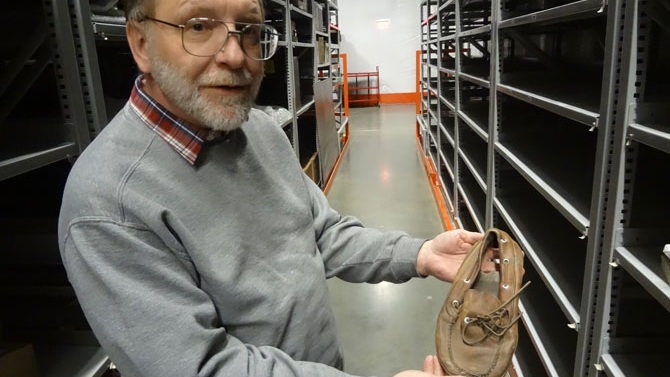 Paul Van Wicklen pulls a leather moccasin out of a box and turns it over in his hands, showing the holes worn in the sole. “I wouldn’t feed this to my dog,” he says.

Ordinarily, he’d be right. The shoe would be worthless—except for whose foot was once inside: John Bell, of the popular Athens jam band Widespread Panic.

That’s why—along with thousands of other mementos of Georgia music history—the shoe is worthy of being stored in a climate-controlled vault buried underneath the Richard B. Russell Building. But maybe not for long. UGA librarians have ambitious plans to display the collection, which once belonged to the since-shuttered Georgia Music Hall of Fame, in Athens and throughout the state.

If they could talk, these items might quote a non-Georgia musician, David Byrne: “Well, how did I get here?” 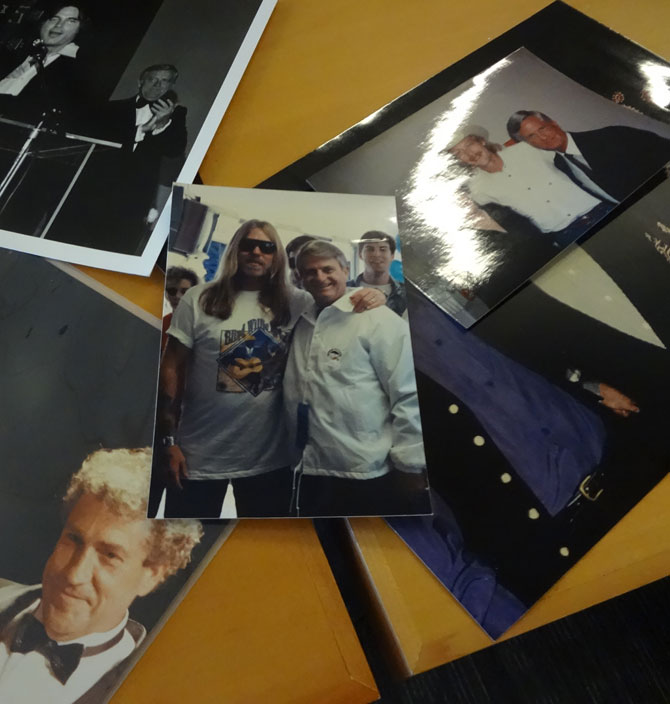 Former Gov. Zell Miller was the driving force behind creating the Georgia Music Hall of Fame. Photos of him with Gregg Allman (center) and country star Alan Jackson (right) are part of the collection, now housed at UGA.

From Macon to Athens

Former Gov. Zell Miller—back when he was a progressive Democrat—was the first politician to recognize that Georgia’s musical heritage had both cultural and economic value. Miller was the driving force behind opening the Georgia Music Hall of Fame in Macon in 1992 and even donated his extensive collection of country and gospel vinyl.

Four years later, the Hall moved into a new building that was expanded in 1999. But it was located on the edge of Macon’s shrinking downtown and struggled to draw people in the door. In 2010, faced with a severe budget crisis, the state legislature cut the Hall’s $700,000 annual subsidy and told its board of directors to move it to a place where it could break even—setting off a year of political intrigue that led to the Hall’s collection (but not the Hall itself) moving to Athens.

“The building in Macon got shut down—it’s no secret—because it was running a huge deficit and had been for years,” says David Barbe, an Athens record producer and director of the UGA Music Business Program, who served on the GMHOF board at the time. “What we were commissioned to do was find a way it could support itself.”

The cities of Dahlonega, Woodstock and Dunwoody submitted multimillion-dollar proposals to build new museums and performing arts venues that officials there believed would become tourist attractions. But after years of sluggish attendance at the Macon museum, the GMHOF board of directors rejected those bids, because they all relied financially on a huge uptick in foot traffic that board members felt was unrealistic.

The board also rejected a pledge by a Macon group to inject local tax money and privately raised cash into the Hall, calling the initiative merely a short-term solution. Atlanta made a pitch after the deadline, feeding rumors that a fix was in, but was not allowed to bid.

Matt Forshee, then the head of economic development for Athens-Clarke County, working with Graham and others, submitted a unique plan: UGA would take possession of the GMHOF collection, and exhibits would be scattered throughout Athens and the state at no taxpayer expense. Eventually, Forshee envisioned a new brick-and-morter museum as part of Project Blue Heron, a since-abandoned plan to develop the area between downtown and the North Oconee River. At least initially, though, Athens would not have had the 10,000 square feet of dedicated exhibit space the GMHOF board required, so the local bid was rejected as well. 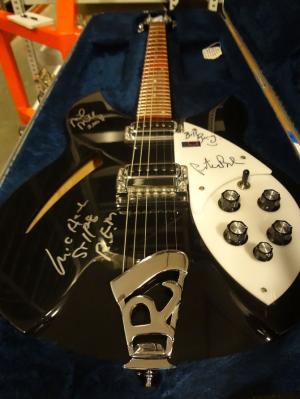 The Georgia Music Hall of Fame collection, now owned by UGA, includes a Rickenbacker guitar signed by all four members of R.E.M.

Since the board couldn’t agree on where to move the GMHOF, it voted to shut it down and ship the collection to UGA’s Russell Library for storage.

Forshee and Graham lost, but they still got their way. “If it’s here, it’s here,” Forshee said after the board’s decision in May 2011. “That’s always good. I think the university is the best place for it.”

A month later, the Hall closed its doors and transferred its assets to the nonprofit Georgia Music Foundation, which shipped the collection to UGA’s beautiful new Richard B. Russell Building for storage in the 32-foot tall, 170-foot long aisles of its 30,000 square foot vault 25 feet underground. The vault is kept at 50 degrees and 30 percent humidity to extend the life of paper by two-and-a-half times, says Van Wicklen, the Special Collections Libraries’ assistant manager.

Some of the people who lent items to the GMHOF took them back after it closed, he says. The foundation formally transferred ownership of what’s left—still plenty—to UGA in December.

“We took ownership of this not too long ago, about six months ago, so basically we’re looking at what all we can make available to the public,” Van Wicklen says. “A lot of it will be made available.”

From Athens to the World

Aboveground, processing assistant Steve Armour is just starting to catalog paper items in the collection—photographs, concert tickets and posters, including backstage passes for R.E.M.’s Green tour. His favorites so far are a set of posters advertising 1920s and ’30s gospel groups. “A lot of early Georgia music history is interesting to me,” he says.

While archivists are still figuring what, exactly, is in the collection, Graham is already making plans. The Special Collections Library is home to the Walter J. Brown Media Archives and the Peabody Awards Collection—the third-largest media archive in North America—and such treasures as field recordings made by local painter and folk musician Art Rosenbaum. Add the GMHOF collection to what UGA already has, and you’ve really got something.

“We’re trying to figure out how we can leverage things and build more and start a huge Georgia music archive,” Graham says.

In November, a committee of state legislators studying the music industry and its economic impact came to Athens to hear testimony from local musicians, promoters and others. The committee’s recommendations, issued in January, included examining “opportunities to expand public access and extend the reach of [the Special Collections Libraries’] music-related archives through partnerships with other organizations.”

And that’s exactly what the Special Collections Libraries are doing. To start, librarians are working with Art Rocks Athens (a nonprofit working to preserve Athens’ famous late 1970s and early ’80s music and art scene) to put a small taste of the collection on display at the Russell building May 1–Dec. 31. Mixed in will be artifacts lent or donated to Art Rocks Athens, which include Bill Berry of R.E.M.’s original drum kit, soundboard recordings made by former 40 Watt Club sound man Pat Biddle and a previously unknown alternate cover for the B-52s’ debut album discovered by photographer George DuBose. “We’re finding amazing things people didn’t even know they had,” Art Rocks Athens Executive Director Maureen McLaughlin says. 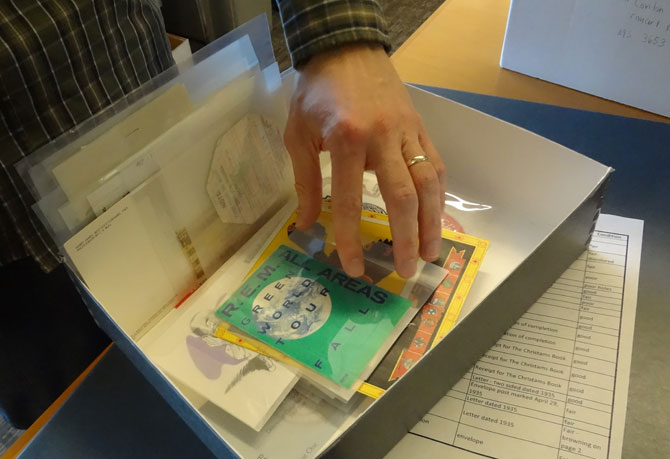 Backstage passes for R.E.M.’s Green tour are among the thousands of former Georgia Music Hall of Fame artifacts UGA librarians are unpacking and cataloging.

The Art Rocks Athens exhibit will occupy five glass cases and a media kiosk at the Richard B. Russell Building, McLaughlin says. After it’s over, she expects many of the materials to be donated to the libraries, adding to the GMHOF nucleus. “Their stuff is going to be in such a beautiful building,” she says. “They might go ahead and say it needs to stay there!”

Eventually, Graham plans to digitize the collection and put it online, and he also sees opportunities to incorporate it into art, music and music business classes.

Music business students could pitch in to help organize and maintain the collection, and the contracts and other legal documents could be particularly useful for research purposes, according to Barbe. “The music industry has a pretty checkered past when it comes to that kind of thing,” he says.

To really fulfill his plans, though, Graham needs funding to hire a curator. “The limiting factor, of course, is we need to raise some private money and get some grants, because this is not something that came with any funding attached,” he says.

The state government is not playing any role. When contacted for an interview, Lisa Love, the Georgia Music Hall of Fame’s former executive director and now the director of music marketing and development for the state Department of Economic Development, offered a statement: “I know this gift that has been bestowed to the University of Georgia will be a proud addition to the university’s Special Collections Libraries. While the state’s rich music heritage is certainly part of the story we tell at GDEcD, stewardship of the Georgia Music Hall of Fame collection is being facilitated by the University of Georgia, and we currently have no plans to be directly involved. The Georgia Department of Economic Development focuses on creating jobs [and] investment, as well as community outreach and education within the state’s music industry.”

There’s no timetable for fundraising or cataloging and digitizing the collection, but if and when it’s done, Georgia’s musical heritage will be available for the entire world to enjoy.

“We have ambitions, and we want to do well by the collection,” Graham says.