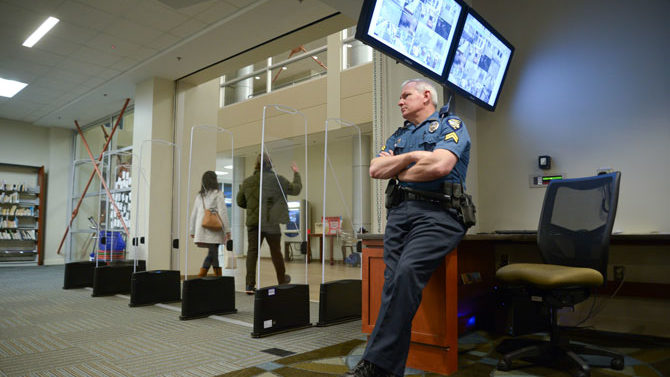 Local governments like Athens-Clarke County may soon face a choice: Allow guns in City Hall, libraries and other government buildings or spend untold sums on security to search people at the door.

State law currently prohibits guns on school property, on the premises of nuclear power plants, near polling places and in mental health facilities, churches, bars, courthouses and other government buildings. While a bill that died in the state legislature at the last minute during last year’s session would have outright allowed permit holders to carry their guns into bars and churches and onto colleges campuses, another version that looks likely to pass this year lets bars and churches opt out and ban guns if they choose and reduces the punishment for carrying a gun on campus to a $100 fine.

As Flagpole reported last year, many Athens religious leaders, bar owners, students, professors and administrators are opposed to guns in churches, in bars and on campus. They’ll be relieved to know that they can continue to keep guns out.

But House Bill 875, the newest version, comes with a twist: To continue banning guns from government buildings, local governments would have to institute security measures similar to courthouses, complete with guards and metal detectors. That could mean emptying your pockets and taking off your belt before checking out a book or paying your water bill.

Guns are a rarity at the Athens-Clarke County Library, and director Kathryn Ames hopes to keep it that way. “We know we have some undercover [police] officers who visit the library, and there are probably people who are licensed to carry that we don’t know about, but I would hope the general public would not carry guns into the library,” she says.

People who are spotted with guns are now asked to leave, but to keep that policy, the library would have to hire additional security and buy a metal detector for the entrance, Ames said. The library now pays an off-duty police officer $25 an hour to patrol the building after 4 p.m. on weekdays and all day on weekends. To keep guns out, a second officer would be needed to staff the metal detector at all times, she said.

Does Ames think the bill would make the library less safe? “Personally, yes,” she says. “I don’t know how the board would react to that. We haven’t discussed it.”

State Rep. Regina Quick (R-Athens), who voted in favor of the bill, disagrees. Local governments should either provide citizens with security or allow them to defend themselves, she said. “As it stands right now, only those folks who are obeying the law are without guns in those government buildings without metal detectors,” she says. “The government is doing nothing to protect them.”

House Bill 875 passed the lower chamber Feb. 18 by a largely party-line 119–56 vote. Rep. Chuck Williams (R-Watkinsville) also supported it because, he says, it strikes a balance between gun rights and private-property rights. “If permit holders are deemed law-abiding citizens, I don’t feel like they should be prohibited from carrying, if that’s what they choose to do, in a government building,” he says. “I don’t fear licensed, rational people who carry weapons.”

Like Williams and Quick, Rep. Spencer Frye (D-Athens) calls himself a Second Amendment supporter. He doesn’t want to restrict gun rights any more than Georgia does now, he says—nor does he think it makes sense to expand gun rights the way HB 875 would. “This year, it’s an election year, so [Republicans] had to kowtow to the radical Second Amendment groups,” he says. “It’s fear-mongering.”

Quick points out that the Capitol already has guards and metal detectors at all entrances. But she says she’d be fine with letting permit-holders carry weapons under the Gold Dome.

State Sen. Bill Cowsert (R-Athens) says he hasn’t read the bill—the Senate is just now starting to consider House legislation after Crossover Day Monday, Mar. 3—and doesn’t want to venture an opinion before he does.

Sen. Frank Ginn (R-Danielsville), though, already knows how he’ll vote. “The bill, in my opinion, is in a much better place than it was when [the session] ended last year,” he says. Last year’s version got caught up in a dispute over whether a gun-safety training class should be required to bring guns onto campuses. Senators said yes; House members said no. This year’s version includes no such provision.

Incidentally, HB 875 initially started out as Ginn’s legislation. When he introduced it last year, it would have merely allowed South Carolina concealed-carry permit holders to bring their guns into Georgia and vice versa, due to concerns about boaters on Lake Hartwell and Lake Russell inadvertently crossing back and forth over the state line.

Ginn’s original bill passed the Senate last year, but a House committee stripped out its language and inserted its own. HB 875 is based on the House version.

The issue Ginn brought up was solved when the South Carolina legislature passed a similar bill, he says, because Georgia automatically offers reciprocity to any state that recognizes Georgia’s gun permits.

So if HB 875 passes, which way would ACC officials lean? Let in guns, or post guards? “Let’s hope it doesn’t pass,” Mayor Nancy Denson says. She describes herself as a “Second Amendment person” but calls guns in government buildings “problematic.”

Either way—pistols or pat-downs—some testy zoning meetings could get even testier.