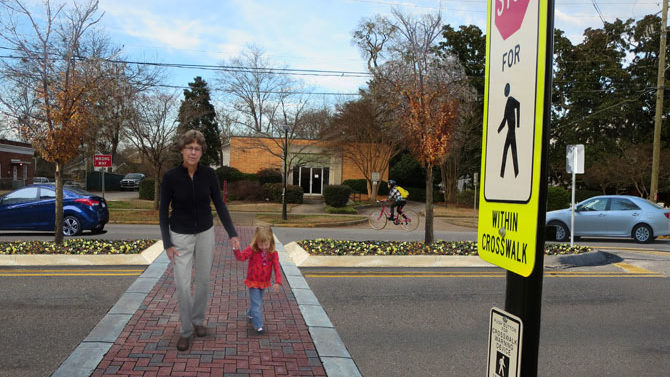 For more than a decade, residents living along Prince Avenue have lobbied to make walking across it safer. They might soon find out if it’s possible.

A plan put forth by Complete Streets: Prince Avenue, spearheaded by veteran neighborhood activist Tony Eubanks, would use barrels to temporarily turn the locally controlled stretch of Prince Avenue between Pulaski Street and Milledge Avenue into a three-lane road for two weeks in mid-April. Left turns would be limited in spots and temporary pedestrian islands installed at crosswalks near The Grit, Daily Groceries and Piedmont College.

During the trial period, Athens-Clarke County transportation officials will measure the traffic volume and speed on Prince and side streets like Hill and Boulevard, as well as collect data on any crashes that might occur during that time. “This is just a demonstration project,” the first of its kind in Athens, says ACC Transportation and Public Works Director David Clark. “We’re going to measure the data, and that’s it.”

From 2003–2012, 20 pedestrians and 18 cyclists were hit by cars on Prince Avenue, making it, statistically, the second-most-dangerous street in Athens behind Lumpkin Street, according to the University of Georgia Traffic Safety Research and Evaluation Program. “It’s my hope that it will be a successful trial run and provide the impetus for a permanent reconfiguration from Milledge to downtown,” ACC Commissioner Kelly Girtz says. “The crash data is pretty clear.”

The Complete Streets: Prince Avenue plan does not include bike lanes, a third rail in local politics. It would reduce the number of lanes pedestrians have to cross and add refuge islands where they can avoid cars that aren’t stopping after they begin to cross. “Bike lanes may emerge in a later iteration,” Girtz says. “The focus right now is on pedestrian safety.”

The ACC Commission considered reconfiguring the intown stretch of Prince Avenue to two travel lanes and a center turn lane in 2005 but voted it down. Powerful institutions like Athens Regional Medical Center, the Athens Area Chamber of Commerce and some property owners along the corridor opposed reconfiguration then. Opposition, at first glance, seems to be muted this time around.

“Only good can come from this kind of open conversation,” says Elaine Cook, ARMC vice president for public and governmental affairs. “The idea that we could try something, work together to try something, is fabulous.”

Reaction from business owners has been mainly positive, according to Girtz and Eubanks. “Anything that would make it safer for folks who are coming to the Bottleworks… is good in my book,” says Kyle Jenks of Parkside Partners, the Atlanta company that owns the Prince Avenue development. Parkside also owns developments along the BeltLine light rail and trail network in Atlanta, and customers’ ability to safely walk and bike is attractive for businesses, Jenks says.

Piedmont College has not taken a stance on the experiment, spokesman Dan Price says. Chamber President Doc Eldridge says he doesn’t expect his board to weigh in, although he’s personally skeptical that the trial will work.

“I was intrigued by what I was shown [Friday] by Ed Nichols [a former developer with an interest in Prince] and Tony Eubanks,” Eldridge says. “I don’t see the chamber taking a position at this point. It’s a decision for the mayor and commission.”

Girtz says he’s hoping for a Mar. 4 or Apr. 1 commission vote to approve the trial. Mayor Nancy Denson says she’s in favor of the pilot project—particularly the visual cues alerting Jackson County drivers that they’ve gone from a state highway to an urban neighborhood—but would prefer to put it off until the fall. “I find it intriguing,” Denson says. “It needs a very serious look. But it needs to be a full community discussion before we go ahead and do an agenda item.”

Denson and Eldridge both say it might take more than two weeks to know whether the experiment works. With the end of the school year and local elections both less than four months away, there may not be time to move forward this spring, Denson says. “I would rather do it in the fall, because fall is the craziest time around here,” she says.

Clark, however, says two weeks is long enough—take more time, and it becomes difficult to avoid events like the Twilight Criterium and UGA commencement. Drivers, especially students and parents, also are more familiar with Athens in the spring—another reason to do the trial in the spring. “We don’t want something like this in place on a football weekend,” Clark says.

For Eldridge, other concerns remain, including whether the three-lane configuration would impede traffic for cars, buses and emergency vehicles. “There may be other ways to skin that cat without going to three-laning,” he says.

ACC hasn’t done a traffic study on Prince since 2009, but Clark estimates that it’s still about 18,500 cars per day—below the 20,000-car threshold where a three-lane configuration generally works. Girtz thinks concerns that drivers will avoid downtown are unfounded. “I think downtown has a magnetism that is strong enough that if you increase the commute by 45 seconds, downtown will still draw people,” Girtz said.

Cook says Eubanks assured her that ambulances won’t be obstructed. “They have accommodated room for people to pull over, and ambulances can go around,” she says.

If the pilot project works, the next step (after making it permanent on the intown stretch of Prince) is to approach the state Department of Transportation, which owns Prince west of Milledge, about adding pedestrian refuges in Normaltown and Homewood Hills, areas that are becoming increasingly walkable as new businesses open, Girtz says. Barnett Shoals Road, Lexington Road and Atlanta Highway could be candidates for similar makeovers, he says.

“I just think we’ve got a lot to gain and nothing to lose,” he says.