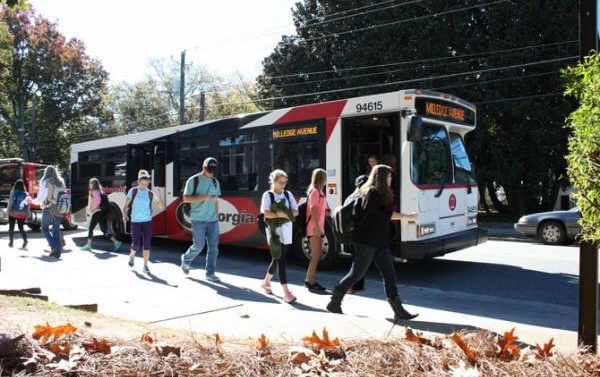 The Health Sciences Campus bus is popular with Normaltown residents. Maybe too popular.

Since the University of Georgia started offering the free service, Athens Transit has lost 23,000 riders from its Nos. 5 and 7 buses, which run down Prince Avenue. Combined with other factors, like student apartment complexes that offer free shuttles to downtown and campus, Athens-Clarke County buses are running on fiscal fumes.

The ability to hop on a campus bus for free is a nice perk for students, UGA employees and non-UGA-affiliated residents alike, and both services take thousands of cars off the streets every day. But partly as a result of UGA Campus Transit’s success in the limited area it serves, Athens Transit is facing more cutbacks and fare hikes down the road.

UGA Up, Athens Transit Down 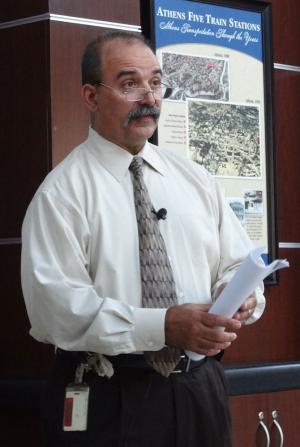 “We’ve lost a lot of UGA trips because of the all the private vans out there from the apartment complexes,” Athens Transit Director Butch McDuffie says. “We’re losing ridership because the university is providing free service to other parts of the community.”

The apartment shuttles, in particular, astound McDuffie, who notes that students living off-campus are already supporting Athens Transit with the taxes embedded in their rents, as well as supporting Campus Transit through student fees, although he acknowledges that the shuttles may be more convenient. Except for a handful off College Station Road, Campus Transit does not serve off-campus apartment complexes; Athens Transit does but is focused more on low-income neighborhoods.

McDuffie says he’s not laying any blame on UGA. The two systems coordinate and cooperate as best they can, and UGA is a major source of funding for Athens Transit.

“We have a need to move students between the two campuses,” Campus Transit System Manager Ron Hamlin says. “The initial indications we got was that there would be no impact or minimal impact… We’re trying to avoid any potential issues with duplication of services.”

Even when ridership was higher, Athens Transit faced cuts. Local taxes make up $1.7 million of its $5.7 million operating budget this year, down more than $1 million from five years ago. Federal grants for capital expenses like new buses and bus shelters are down. The Athens-Clarke County Commission has raised adult fares (children, seniors, the disabled and people who buy multi-ride passes pay less) three times in nine years, from $1 in 2005 to $1.25 in 2009 to $1.50 in 2012 to $1.60 this year.

Under former Mayor Heidi Davison, fares went up to pay for new services like Saturday and night buses. But the more recent hikes have merely served to avoid even more severe cuts. Mayor Nancy Denson, citing poor ridership numbers, has twice proposed eliminating bus service after 6 p.m., but commissioners, seeing it as essential for carless workers, settled for fare hikes and cutting back service by only one hour, to 10 p.m.

The Link, rural vans that shuttled people in far-flung areas to bus stops, has already stalled due to lack of ridership. Unless a fare hike is approved, McDuffie says he’ll be forced to recommend more cuts—maybe gameday shuttles, maybe service to the little-used park-and-ride lot on Oconee Street, maybe night buses again. The alternatives are a bigger contribution from taxpayers or another fare increase. Farebox revenue is down to 26 percent this year, below the 35 percent required by ACC policy.

“Our job is to try to run this operation like a business,” McDuffie says. “You try not to pit neighborhood against neighborhood, day against night, things like that, but you still need to look at your cost recovery.”

A public hearing is scheduled for 6 p.m. Tuesday, Nov. 19 at the Multimodal Center. Options include a 10, 15 or 20 cent fare hike, as well as a 10, 15 or 25 cent transfer fee. After the hearing, McDuffie will make a recommendation to the commission, which will take comment again and discuss it Thursday, Nov. 21, then vote Tuesday, Dec. 3.

The reason he’s doing it now, rather than as part of the budget process this spring, is because ACC and UGA are about to negotiate a new contract before the end of the year. Under an agreement between the local government and the university, UGA pays ACC every time a student or employee swipes his UGACard to board Athens Transit. The contract will bring in about $1.3 million this year. When the commission decides to raise fares as part of the county budget approved each June, though, ACC loses out because the amount per ride has already been settled based on the previous year’s lower fare.

Other Ways to Pay

Meanwhile, on the other side of the Arch, student transportation and employee parking fees cover the $7.5 million annually needed to run UGA’s 10 routes. Many run several times an hour and 24 hours a day when school is in session—something Athens Transit can’t do because it’s serving a less dense, more spread-out population, McDuffie says.

For those lucky enough to live near South Milledge or Prince avenues, Athens Transit fare hikes or cutbacks won’t matter. A free UGA bus will come along every few minutes to take them downtown.

“My concern is the folks who increasingly need ACC transit and can’t use UGA transit are the ones who end up paying,” says Elliott Caldwell, president of the alternative transportation group BikeAthens.

As UGA expands, the dilemma is not going away. When the new veterinary teaching hospital opens on College Station Road in a couple of years, Campus Transit will run there, too.

“We’re still in the planning stages on that one,” Hamlin says. “We don’t know if we’ll be operating open doors.”

That’s a reference to UGA’s policy of letting anyone board for free. It’s simply not worth the trouble to check UGACards and take fares from anyone without one, he says, and it doesn’t cost UGA anything to let a townie onboard.

Officials in Clemson, SC, discovered the same thing. Eighteen years ago, city and Clemson University officials decided to scrap a campus van service and start a real bus system that would serve both students and city residents. It now carries two million riders a year among three counties, five cities and four colleges in the area. And it’s free for riders, funded entirely by local and federal taxes and student fees totaling $4 million annually.

“The university saw that as an attractive proposition, and so did the city, and it’s been a huge success from Day One,” says Al Babinicz, head of CATBus, the Clemson system.

Like McDuffie, Babinicz does not understand why apartment complexes want to operate shuttles, calling it “stunning” that they would pay for such a duplication of service. Unlike Athens Transit or UGA Campus Transit, however, CATBus does focus on serving high-demand areas, mainly student apartments. One developer built a $25 million complex on the condition that CATBus ran there, Babinicz says.

“The entire community wins,” he says. “The apartment owners win, the students win, the university wins.”

Nationwide, 39 cities operate free transit systems, including Chapel Hill, NC, home of the University of North Carolina. “We have people recognizing that if they’re analyzing their cost structure, particularly in college communities, it costs more to collect fares than you raise,” Babinicz says.

Would a combined, free system work in Athens? “First of all, you have two very fine systems, so you need to be very careful what you do if you are merged or blended to make sure the service or funding stays in place,” Babinicz says. He advises UGA and ACC officials to look at pooling grant dollars and finding efficiencies in maintenance, fuel and purchasing vehicles.

Neither McDuffie nor Hamlin is willing to endorse the idea of combining systems. “That would be a decision that’s made at a higher level than mine,” Hamlin says.

ACC Commissioner Mike Hamby, though, says he’s intrigued. “I think you’d have a huge ridership for that, and a sales tax to support that would be a great idea.”

Hamby and Commissioner Allison Wright are pushing for state legislators to allow ACC residents to vote on a small sales tax increase—less than a penny on the dollar—to fund transit and economic development. (ACC’s current 7 percent sales tax is the highest allowed by state law.)

Hamby envisions the tax paying for infrastructure projects that would have been funded by T-SPLOST, a 1 percent regional sales tax for transportation that Northeast Georgia voters rejected in 2012, although a majority in Athens favored it. That could include fixing key corridors like Atlanta Highway, Lexington Road and Prince Avenue, as well as buses. The T-SPLOST project list originally included $7.5 million over 10 years for every-half-hour service on all Athens Transit routes, most of which inconveniently run just once an hour.

“Transit is such an important service for people to get to jobs, to school, wherever they’re going, to the grocery store, that I don’t want to do anything to cut back on that service,” Hamby says.

ACC needs to invest to draw tourists and private development, Hamby and Wright say, but they don’t want to put it all on the backs of businesses and homeowners in a county where almost half the land is off the tax rolls. “The reality is, it’s a burden on the property taxpayer with the property where it is collected as opposed to where it’s not, the churches and the schools,” Wright says.

Especially after T-SPLOST failed across most of the state, commissioners may have a tough time even convincing state lawmakers to let ACC citizens tax themselves. “I will listen to any argument they have to make, but they will have to make a very good one to convince me Athens-Clarke County needs an additional sales tax,” says state Rep. Regina Quick (R-Athens).

Others may argue that bus passengers shouldn’t bear the brunt. As McDuffie points out, everyone benefits from transit—even those who don’t use it. “Public transportation benefits everybody, whether you want to look at the environment, traffic mitigation, saving money, saving fuel,” he says.