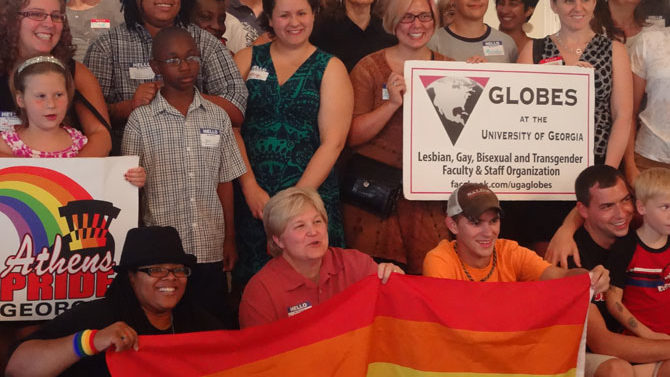 DeeDee Kane’s week started off on a sour note.

The University of Georgia professor and head of GLOBES learned Monday, June 24 that the UGA Foundation would not fund health insurance for the domestic partners of gay and lesbian UGA employees, including her own partner. Kane feared the U.S. Supreme Court would deal the LGBT community another setback the following Wednesday by upholding the Defense of Marriage Act.

“This morning, for me, started out with some trepidation,” she said June 26. “Are we going to get some more bad news or some good news?”

It was good news—maybe the best they’d ever heard. The Supreme Court struck down DOMA, and more than 50 people gathered that evening to celebrate at the UGA Episcopal Student Center. One activist, Ricky Roberts, even broke out into song.

Kane acknowledged that many people feel frustrated and angry that they have to work so hard to win their rights. She and others, though, were optimistic that they would win in the end.

“I believe in my heart we will have marriage equality in the state of Georgia,” said Melinda Sheldon, deputy director of Georgia Equality.

But the UGA Foundation’s decision shows just how much work LGBT activists have ahead of them. They won a small victory in May, when University System Chancellor Hank Huckaby agreed to let UGA offer “soft” benefits, paid for by employees, such as dental and life insurance, to domestic partners. Huckaby also told UGA President Michael Adams that offering health insurance to domestic partners was fine, as long as no taxpayer funds were involved.

To many, the UGA Foundation seemed the obvious source of funding, as it raises private donations. Yet June 24, the university announced the foundation’s decision not to fund the benefits, in part because the foundation is administered by state-paid employees, meaning benefits would require the indirect use of state funds. The foundation also said health care funding for the domestic partners of UGA employees lies outside of its mission. Flagpole was unable to reach foundation Chairman Bill Young for comment, and its communications director did not respond to questions.

“I’m incredibly disappointed in this decision,” said Janet Frick, chairwoman of the University Council’s Human Resources Committee. “I see this as a huge missed opportunity for UGA.”

“Meanwhile, our institutional reputation will continue to be of having a lack of commitment to diversity and equity,” Frick said. “We’re in a very small minority of top universities that don’t have these benefits. And we’ll continue to stick out more and more as a place that people won’t want to come work.”

Kane cited one part of the Foundation’s mission and purpose statement—“fiduciary care for the assets of the Foundation for the long-term benefit and enhancement of the University”—as her reason for hoping it would fund the benefits.

“In my interpretation of that, that would include quality of life for faculty and staff and issues of retention and equity,” she says. “They’re clearly not interpreting it that way. So that was disappointing.”

Now, invigorated by their DOMA win, activists will turn their attention to other tasks, such as convincing state legislators to ban workplace discrimination based on sexuality and continuing to push for domestic partner benefits.

There are other options, Kane said. The foundation isn’t the only possible source of funding. It was just the one that made sense.

“This is far from over, because the university has not exhausted all the possible avenues for finding the money for this program,” said Roberts, a former GLOBES chairwoman. “There are just too many avenues where the money could come from for them to throw in the towel at this point.”

For now, Kane said, GLOBES will continue working with the University Council and the administration to seek out other sources of funding.

“The faculty and the council and the administration seem to be behind this, but it would be nice to see a little more public advocacy and personal advocacy from the president’s office, from HR,” she said. “In the other university systems that we’ve seen this happen at, the higher administration has provided direction and leadership on this issue.”

Now that DOMA has been struck down, equal rights advocates at UGA hope the school’s administration will adopt a mindset reflecting that of the nation.

“I hope that UGA administrators will align with the rest of the country in feeling that equality and fair treatment should be the law of the land and the law of campus,” Roberts said.

In a statement, UGA spokesman Tom Jackson said the administration is “pleased that UGA is able to provide the voluntary benefits along the same lines as Georgia Tech, Georgia State, and other institutions in the System” and would not comment further. But as Frick pointed out, these soft benefits are employee-funded and eight years late—faculty and staff first asked for them in 2005.

That was a year after Georgia voters, by a margin of 77 percent to 23 percent (52-48 even in supposedly liberal Athens), passed an amendment to the state constitution banning gay marriage and civil unions. There was a certain amount of schadenfreude in the air at the DOMA celebration.

“Remember how sick and frustrated you were in 2003, 2004?” DuBose asked the crowd. “How you cussed and kicked something? Well, this (the DOMA ruling) is retribution for that.

“I think we should bring it back up for a vote,” she said, noting that the majority of Americans now accept same-sex marriage, especially young people. “I think we can beat ’em now.”

Based on Georgia Equality’s polls, Sheldon was not so sure.

“It may not surprise you we don’t have as much support here as we do when you poll all Americans,” she said. “It’s still in the 30 percent (range). So the first step is education.”

In the meantime, Sheldon and other experts are still trying to parse what the DOMA decision will mean for Georgians. Same-sex marriages in other states still won’t be recognized here, and partners won’t be eligible for federal tax breaks for married couples or Social Security benefits because they’re under the control of states, she said. However, Sheldon, an Army reservist, expects the military to “act really quickly” to offer benefits like health insurance to same-sex partners, and the Obama administration will make other federal benefits available in the coming weeks, she said.