Republican Convention in Athens Reveals Rift in the GOP 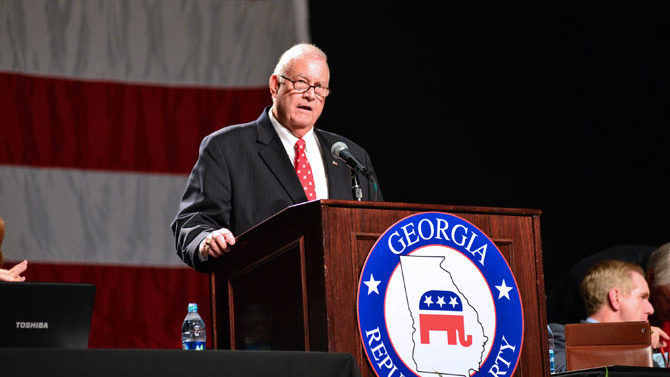 Real talk: I don’t know much about the particularities of the Georgia Republican Party, as an official group that meets and decides Republican-y things. Not my crowd.

I entered the Georgia GOP convention at the Classic Center expecting to find a political monolith, same from its core to the periphery. Having watched four years of rigid discipline in the party to stymie President Obama, I was prepared to find lockstep uniformity.

But I also knew that, nationally, the GOP is struggling with its identity, that the largely Southern conservatism of the tea party is in conflict with so-called centrist Republicans from the country’s vast remainder. (It’s a bit more complicated, but that’s the basic outline.) The party has suffered a convincing series of defeats in national election results, and the election-minded strategist wing of the party is beginning to actively work against the principled insurgents to ensure that electable, establishment candidates be chosen to vie against Democrats. This is what I did know going in, a cobbled-together set of Beltway truisms. There’s an intense division—or divisions, more accurately—in the party. And yet, despite this apparent civil war, I still harbored the sense of a monolithic thing, an indivisible and indistinguishable cast of thousands, a whole convention of Republicans.

What I found was a party very much divided, in strange and deep unease at holding unprecedented power in the state while watching national power slip away, perhaps for a generation. The tea party assails the party establishment and vice versa, while the young “liberty” movement (loosely affiliated with Ron Paul) challenges both.

The identity crisis is profound. Only at a GOP convention can you pass by someone at a table selling Confederate memorabilia talking with a self-described atheist who wants gay undocumented Mexican immigrants granted citizenship and married tomorrow. (That happened.) Or a Massachusetts-bred, pro-choice Jewish Republican who argues with her rabbi about her penchant for coming to synagogue armed. Or a Republican who sounds more intuitively Marxist than your typical Occupy protester.

I don’t mean to suggest that the convention didn’t feature some of your favorites from your Old White Christian Conservative Guy trading card set—hella dudes in overalls. But there’s something of a battle brewing. It’s palpable as you walk along the dozens of tables set up by the different factions and their candidates. It’s a political tool-sharpening, and alternately, doom you get a sense of from talking to rank-and-file Republicans and grassroots activists.

It bled onto the convention floor. The primary objective of the convention was to elect a new Georgia GOP chairperson. Sue Everhart, the beloved chairwoman for three terms, was barred by term limits from seeking another two years. In the end, Everhart’s successor only seems to have won because one of the four candidates, former state Sen. Seth Harp of Columbus, withdrew his nomination at the podium and directed his voters to the eventual winner, longtime Athens GOP official John Padgett. Harp said it was to “heal” the party. Harp’s martyrdom echoed the words of Gov. Nathan Deal, who implored the thousands of delegates not to become the “Hatfields and McCoys” of politics.

Of the other two candidates for chairman, only the young Alex Johnson stood out as a contender, having been the only candidate to bring the crowd to its feet in screaming and applause. Johnson represents the liberty contingent and received, easily, the biggest ovation of any politician I saw, including our local favorite, Rep. Paul Broun, Jr., Deal or any other major elected official in the state. I should mention that Johnson is all of 28 years old, and that his rhetoric was by far the most critical of Democrats and Republicans.

The governor’s “Hatfield and McCoy” speech, ostensibly a demonstration of how to reconcile and bridge-build, was a tortured affair, as Deal’s enlightened rhetoric was simply a dizzying vacillation between unitarian platitudes, the “wisdom” of reaching out to minorities and the same red meat usually thrown to crowds like the one assembled. In a bizarre detour, Deal attempted a trifecta—known as the “hate-trick” in some GOP circles—by evoking the specters of welfare, immigrants and terrorism in one strange ambitious swing.

“You can’t just dump” immigrant refugees in Georgia, he said. The state receives refugees disproportionately to others, and we already have all these other immigrants relaxing on the dole. Since we’re made by The Government to use the state to feed and shelter, for a time, these no-good huddled masses fleeing tyranny and danger for our shores, Deal has taken steps to shove these refugees off the welfare rolls, because what about the Boston bombing? Those were immigrant refugee types too. Triple score, and the crowd—or a certain demographic thereof—roared.

Then Deal turned on a dime to beg the party to reach out to the valuable minority vote and create a “multiracial coalition” by being what the governor called “happy warriors.” It was unclear if that meant anything more than smiling while one issued the same racialized fear-mongering that minorities have come to expect from the party.

Outside the convention hall, I spoke with tea party leader Debbie Dooley while she dexterously folded “Beware of the RINO” signs into fans. RINO is an intra-GOP epithet meaning “Republican in Name Only” that is fired like a howitzer these days at any Republican who doesn’t satisfy an ever-increasingly rigid purity test. Dooley, well-known in the party, seemed more eager to critique the Bush years than the Obama Administration, recalling the early tea parties, before they were co-opted, where there was “as much anger at the Republicans and Karl Rove and the Bush Administration as there was at the Democrats.” She was intent on establishing her wing’s antagonism to party chiefs: “I don’t know one [tea party activist] who likes George Bush.”

Dooley was folding the large sheets into fans because, while signs were not permitted on the convention floor, fans were. (The good women of the Georgia GOP wouldn’t want to get shiny, after all.) Dooley is a bit of a trickster. The “fans” also worked as surprisingly loud noisemakers, which she demonstrated with the same dexterity as she displayed passing them out by the dozens.

In the end, the party was “healed” when Padgett gained victory with the 11th-hour maneuver. Alex Johnson’s focus on “false Republicans” and their “broken promises” didn’t win the party’s deciders over. But it’s hard to see the insurgents going anywhere. Their passion filled the hall in a way the old guard can’t. Coming of political age, many of them, during the profligate Bush years, they eagerly decry the party establishment as accomplices. The establishment still shrugs them off like a nuisance.  It’s hard to tell which are the RINOs.