Georgia Lawmakers Give Homebrewers a Break. Are Brewpubs Next? 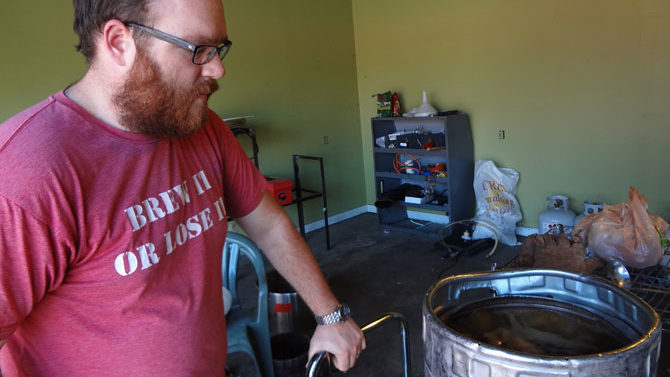 There’s a keg party under the Gold Dome, and everyone’s invited.

In addition to the much-publicized law Gov. Nathan Deal signed earlier this month allowing local governments to lift restrictions on retail beer and wine sales near college campuses—which could make it easier to lure a grocery store to downtown Athens—the Georgia legislature is cracking open a host of refreshing new laws deregulating the ale industry.

Lawmakers doubled the amount of the beer homebrewers can produce and allowed them to transport their beer to festivals and contests. They’re also considering legislation to let beer lovers buy their favorite IPA or chocolate stout directly from microbreweries or buy a six-pack from a brewpub to go.

The homebrewing law, House Bill 99, passed with an overwhelming bipartisan majority and was signed by Deal May 6. It allows homebrewers to produce up to 100 gallons of malt beverages per year, or 200 if more than one person of legal drinking age lives in the household. As Evan Smith, who owns the local homebrewing supplier Blockader, points out, that’s about a case of beer per week—maybe a lot to drink yourself, but not if you’re giving it away to family and friends.

Is homebrewing getting more popular? “Not according to my bank account,” Smith jokes, but it surely seems that way. The American Homebrewers Association has more than 36,000 members, a number that’s quadrupled since 2005. Mississippi—the last state where homebrewing is banned—will legalize it effective July 1.

Smith points to the growing popularity of craft beers as the root of the homebrewing movement. “More and more people are being turned on to craft beer—tasting it, understanding it and wanting more,” he says. “Some folks really like the creativity of coming up with new beers, beers that don’t exist.”

Although craft beer makes up less than 7 percent of the U.S. beer market, sales from craft breweries, microbreweries and brewpubs grew 17 percent last year to about 400 million gallons, compared to a 1 percent growth for the total beer market, according to the Brewers Association, a craft beer industry group.

Other bills with a chance to pass next year would let tour-goers at breweries sample their products and buy up to 288 ounces (24 12-ounce beers) packaged to go. That’s currently illegal under the ironclad post-Prohibition three-tier system, where producers sell to wholesalers that distribute to stores, bars and restaurants.

“You visit Terrapin, then you have to pull up Google Maps to find a store that sells the beer,” says state Rep. Spencer Frye (D-Athens). “It’s ridiculous.”

Such legislation could help local breweries like Terrapin. “If they could sell a growler (a jug) of Hopsecutioner or a six-pack of Golden Ale at a slightly cheaper price than a grocery store, that’s big money right here,” Smith says. [Editor’s note: Microbrewery owner David Stein later clarified that breweries would not seek to undermine retailers by charging less.]

“This would greatly help a startup brewery, such as Creature Comforts, grow more rapidly, in turn generating more tax revenue and jobs, a win-win,” says David Stein, who is opening a microbrewery in the Snow Tire building downtown. “A good question to ask is, ‘What is the downside?’ Not much, in my opinion. Many, if not most, other states allow a production brewery to sell their beer from the brewery directly to the consumer, and everyone on each tier is doing just fine.”

Senate Bill 174 and HB 314 also would allow brewpubs, in addition to breweries, to sell beer for off-premises consumption. Copper Creek manager Chelsie Anglin says she is not sure if that local brewpub would qualify. “If we’re able to, I think we definitely will, but I’d have to check on the details,” Anglin says.

The legislature’s relatively newfound willingness to (metaphorically) touch alcohol shows the state has clearly changed since 2004, when lawmakers first allowed high gravity microbrews and imports to be sold here. Under former Gov. Sonny Perdue, churches successfully kept a law banning retail alcohol sales on Sundays on the books, but when Deal took office in 2011, he declared, “I don’t drink. I simply believe in democracy,” and communities like Athens across the state voted to legalize Sunday sales.

“The door got kicked down on that one, and the floodgates opened, in a sense, which is good,” Smith says. “It’s common-sense legislation we sorely need.”

In other Southern states, religious objections complicated the issue. “We’re just completely opening up the whole state to alcohol—every family, every home, every block,” Republican Rep. Arthur Payne said recently while debating homebrewing in Alabama, according to an article in Statewire, a nonprofit government news agency. “I represent a district that has a strong family unit, and we don’t want to flood our neighborhoods with alcohol.”

Christian groups didn’t object to the alcohol bills the Georgia legislature considered earlier this year, according to state Sen. Frank Ginn (R-Danielsville). “The Bible doesn’t speak about alcohol as a sin. It’s the excess,” he says. “Obviously, we want people to do things in moderation.”

The main obstacle now is companies like Anheuser-Busch InBev, the Belgian giant that owns such popular brands as Budweiser, Corona, Beck’s and Michelob, says Frye, who is cosponsoring House Bill 314, the microbrewery/brewpub bill. The three-tier system “was put into place to protect consumers, but now it only protects big business interests,” Frye says. “It doesn’t protect the little guy.”

Backers of alcohol-related bills, especially conservatives, have succeeded by arguing that loosening blue laws will create jobs and reduce the size of government. “This is probably the most pro-liberty, pro-freedom bill we have passed this session, and it will have a very positive economic impact on the state,” says Rep. Jason Spencer (R-Woodbine), the author of HB 99.

Although supporters also call HB 314 an economic development measure that will create jobs, Frye is not optimistic that it will pass next year. “This type of change is going to take a long time,” he says.

In the Senate, Regulated Industries Committee Chairman Jack Murphy (R-Cumming) has assigned a study committee to explore the issues raised by SB 174 and SB 169—the bill to allow establishments to serve samples—before the legislature reconvenes in January. “They’re still alive,” says Ginn, the vice chairman of Regulated Industries. “We’re trying to find out what the impact on the state will be.”