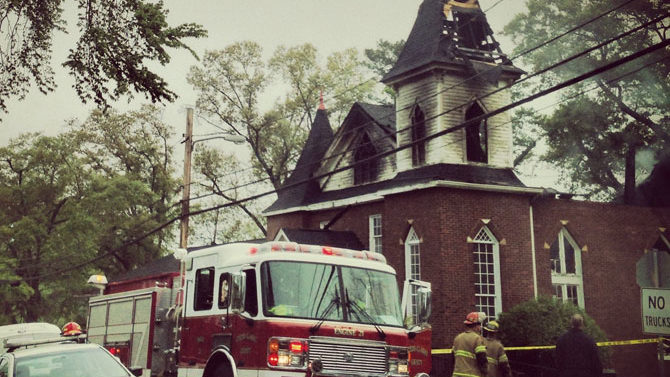 Early in the morning on Tuesday, Apr. 16, Erin Barger stood outside the smoldering ruins of Oconee Street United Methodist Church, where  Action Ministries, the nonprofit she runs, has served meals to the poor and homeless for 24 years. Her main concern was how to feed the people who’d be arriving for breakfast in less than two hours, unaware of the fire the night before.

“Breakfast was right around the corner, and we had no kitchen and no food,” Barger said.

A local Chick-fil-A came through with 70 biscuits. And just like that, the Athens community reacted the way it always responds to calamity—with an outpouring of support.

The fire—and the community response—was reminiscent of the one at the Georgia Theatre that rocked Athens (no pun intended) in 2009. The exact cause remains unknown, but investigators are sure it was accidental. A call came in at 10:18 p.m. Monday, Apr. 15, according to Athens-Clarke Assistant Fire Chief Kyle Hendrix. Firefighters responded within four minutes; by the time they arrived, flames were already shooting through the roof. Little but the damaged steeple, the altar and the brick exterior walls remain. 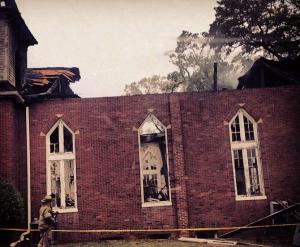 After word got out about the fire, people donated so much food and supplies that Action Ministries has nowhere to store it all. First Baptist Church stepped up, offering its kitchen and fellowship hall to Our Daily Bread for the next six months. The Oconee Street congregation will worship, for now, at Young Harris UMC.

“That’s our sister church,” said the Rev. Richard Moeller, the pastor at Chapelwood UMC. “It’s tough to take. We offered any help we can give them.”

Last Wednesday, it was Chapelwood’s turn to dish out sloppy joes and potato salad at Our Daily Bread, except at First Baptist this time instead of Oconee Street. (Local churches rotate monthly, preparing and serving meals.) Diners gathered on Oconee Street, and a Milledge Avenue Baptist Church shuttle bus drove them to Hancock Avenue. (First Baptist asked the media not to interview people eating there.)

“My prayer would be that the day would come when Our Daily Bread can ‘return home’ to the church that has hosted it for so long,” the Rev. Paul Baxley, First Baptist’s pastor, wrote in an email to its congregation. “At the same time, so many in our church have cooked and served meals at Our Daily Bread, and you are well aware of how critical this ministry is for the community. It is the primary source of nourishment for many, and for some its presence is what keeps individuals and families from becoming homeless.”

Oconee Street UMC’s pastor, the Rev. Lisa Caine, is still working with the insurance company, but she already knows rebuilding will be expensive. The church has set up a fundraising website at www.rebuildoconeestreetumc.org.

“We definitely will rebuild on the same spot,” Caine said. “The church has been in that location for 110 years. Athens wouldn’t be Athens without the church on the hill.”

Oconee Street UMC has a long history of worship and social activism. Founded closer to downtown and across the river in 1871, it moved to its present location in 1903. It was expanded in 1920 and again in 1968, then renovated in 1979.

A year later, the Rev. Carolyn Morris became the first female pastor in Athens. In 1989, the church partnered with Athens Urban Ministry to open Our Daily Bread, the city’s first “noon kitchen.” Church members have also raised countless dollars and donated many hours of their time to other local charities, and the church often hosted neighborhood meetings.

While Barger is grateful for all the support, due to limited pantry space, what the agency needs now most of all is money, she said. Tax-deductible donations can be made at actionministries.net/donate/ or sent to 717 Oconee Street, Athens, GA 30605. (Action Ministries’ offices weren’t damaged by the fire.)

Worried that support will dry up once the fire is out of the headlines, Barger also urged people to sign up for nonprofit’s annual Action Dash 5K race on Labor Day weekend at actiondash.org. “I think it would be a wonderful opportunity to celebrate what we’ve been through and where we’re going,” she said.

Once the smoky dust settles, both Caine and Barger said, they hope to bring Our Daily Bread back to the rebuilt Oconee Street UMC. “We still consider them our home,” Barger said.