Selling What You Sow 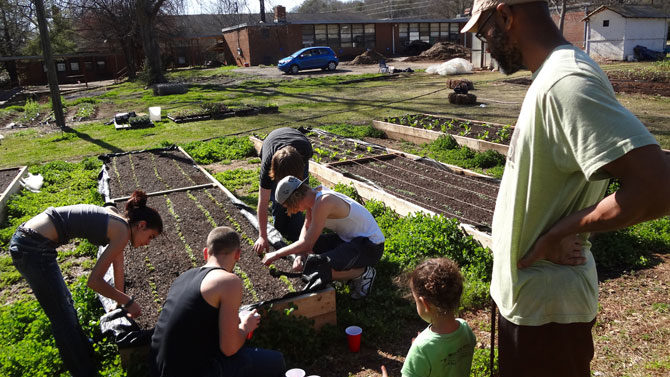 Ethel Collins grew up on a farm. When her parents were eating traditional Southern breakfasts of sausage, ham, bacon and biscuits, she’d always go out to the garden, pick some greens and stir-fry them with onions for her morning meal.

But Collins got away from healthy eating. Then, one day she fainted and was taken to the hospital, where doctors told her she had leukemia. “I was put on a special diet,” she says. “I got back to my vegetables. I’ve been doing better ever since.” 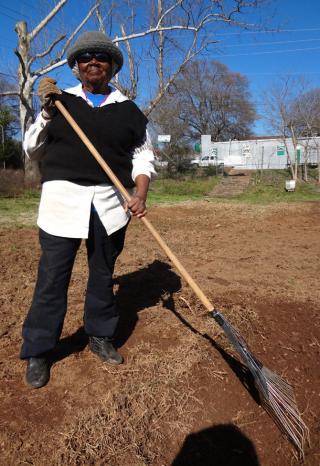 “I come out here to find out what organic was,” she says. “They gave me a key and put me in charge, put me on the payroll.

“What can I say? It’s just that simple. They’re doing something good. I wanted to be part of it.”

The Exception to the Rule

When the Athens Land Trust received a nearly $300,000 U.S. Department of Agriculture grant in 2010 to plant community gardens and teach gardening techniques to local residents, the primary goal was to provide inexpensive and healthy food for low-income families, who often live in neighborhoods known as food deserts where anything but junk food is hard to come by or prohibitively expensive, putting them at higher risk for diabetes and other obesity-related diseases.

The nonprofit also started scouting for a farmers market location where gardeners could make a little pocket money by selling the fruits of their labor, but local zoning laws don’t allow commercial agriculture in most areas. It wasn’t until 2012, when director Heather Benham approached the Clarke County School District about using the abandoned West Broad Street School, that the land trust could make it happen.

Superintendent Phil Lanoue suggested not just a garden on the old school grounds, but a market as well, says Fenwick Broyard, community agriculture program manager for the land trust.

“It was about a year, year-and-a-half negotiation with Athens-Clarke County before it was pointed out to us that several entities weren’t subject to zoning, one of them being the school district,” Broyard says.

The school district isn’t subject to Athens-Clarke zoning laws, but in most of the county, it’s illegal to sell the food you grow. ACC commissioners recently started considering whether to allow residents to sell food from their gardens in stands or at farmers markets or allow them to band together to start larger community gardens on vacant lots.

Fruit and vegetable gardens for personal consumption are defined as “horticulture” under ACC law and are allowed anywhere, according to Planning Director Brad Griffin. But raising animals for food—chickens, cows, goats, even bees—as well as plants grown for commercial purposes count as “agriculture.” Agriculture is only allowed in areas on the outskirts of the county zoned for agriculture, as well as—with limitations—industrial zones and single-family neighborhoods with acre lots or larger. It’s completely banned in denser intown neighborhoods where people are more likely to want to start community gardens, Griffin says. He adds, though, that officials have no interest in whether people sell a bounty crop of tomatoes to someone down the street.

Athens Farmers Market manager Jan Kozak, an advocate for organic and locally grown food, calls the discussion a step in the right direction. But he wants to see comprehensive reform of local, state and national agriculture policies—such as an end to corporate subsidies for large-scale corn, wheat and soybean producers—to encourage small-scale farming.

“Ultimately, I think Athens and the rest of the state of Georgia have really poor policy when it comes to food production,” Kozak says. “It’s laughable that we have to go through this process to sell food from our own backyards.”

Griffin, however, warned commissioners during a committee meeting last week that the issue is more complicated than it seems: Where is agriculture appropriate? What if neighbors objected? What if out-of-towners started farming lots in Athens? How would code enforcement officers know if the food sold at a streetside stand came from a backyard garden or Kroger?

“I think the sales part of it complicates it very quickly,” Griffin says. “All of a sudden, you’ve got small mini-farms that are being set up and run out of neighborhoods.”

Commissioners say they want to encourage community gardens, but they’re proceeding cautiously, asking ACC staff for more information on how other cities deal with the conundrum.

“I love the concept, and I want to see more of these, but I want to make sure we look at all aspects before we [decide],” Commissioner Kathy Hoard says.

Demand Shoots Up for Local Food

The issue crops up at a time when Athenians, and Americans in general, are taking a growing interest in locally produced food, rejecting the corn-syrup culture of pesticide-laden produce transported thousands of miles to grocery store aisles. Through the USDA grant, the Athens Land Trust has set up 13 community gardens at retirement homes, churches, apartment complexes and other community centers, with two more on the way, Broyard says.

At the same time, local restaurants serve food harvested yesterday from farms just a few miles away, often by a new generation of young people trying their hand at agriculture. Public school students now learn about raised beds alongside reading, writing and arithmetic.

There’s room for more farmers’ markets in Athens, according to Kozak, who also sits on the West Broad Farmers Market’s board of directors. He hopes business at his organization’s Wednesday afternoon market at City Hall will pick up, especially if the downtown master plan now underway recommends turning College Square into a pedestrian plaza.

Since its founding six years ago, the Athens Farmers Market has grown steadily to 2,000 customers at Bishop Park on Saturday mornings, Kozak says—an impressive number in a city of 120,000. (The market starts up again Apr. 6.) The land trust’s farmers’ market at the old West Broad Street School will sell produce grown in its community gardens, as well as local meat, eggs, honey and other products, on the first Saturday of the month starting May 4. A tailgate market every Tuesday afternoon begins May 7.

Not everyone in the neighborhood near West Broad Street School is enamored with gardening, though. “Unless there is a large group of people committed to the garden over time, gardens can easily fall into disrepair,” Broyard says.

Collins and another neighborhood resident, Mamie Skelton, say they’ve had a tough time convincing other residents to join them. “I had a few neighbors inquire about it, but they weren’t serious about it,” Collins says. “It’s mostly the students.” 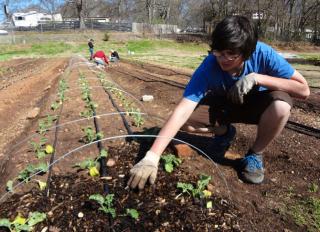 Elijah Easton is one of about dozen Classic City High School students employed by the land trust at the West Broad Street school garden. He also gardens on property in Madison County his grandmother left him and his two sisters. He doesn’t want to be a full-time farmer, but he hopes to one day supplement his income by farming.

“I think our purpose is to be a little bit of a guardian for the ecosystem,” Easton says.

Easton would be like the two-thirds of farmers who must work a second job to survive, according to Kozak. “Being a small-scale farmer in America is not yet at the point where you can make it into a full-time living and sustain yourself,” he says.

The land trust also offers workshops on composting, pest control and other topics, including an eight-week business class for farmers’ market vendors. (Collins, once she completes it, says she plans to open a healthy Southern restaurant down the street.) Skelton, who recently completed cosmetology school at Athens Tech, says she can apply lessons she learned at the community garden about health to her new career.

That’s why Skelton can’t understand why most of her neighbors won’t garden or buy fresh, local produce. “There’s nothing like it on Earth,” she says. “It gets rid of all the toxins in your body. You’re losing weight. You won’t get sick. It’s the best.”

Kozak hopes more people from the Hancock Corridor, Rocksprings and Baxter-Broad neighborhoods—for whom downtown and Bishop Park might not be convenient—will start shopping at the West Broad Street market.