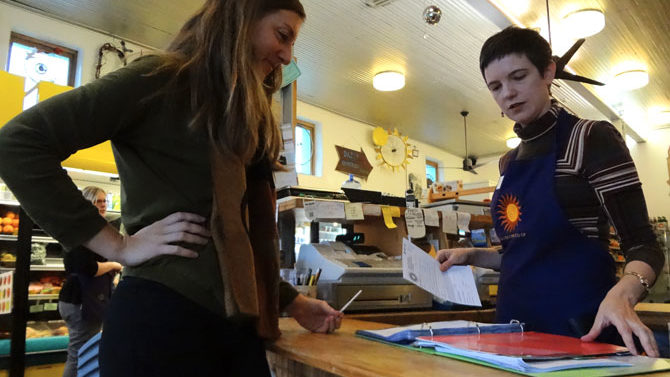 Yes, it’s owned by its members and staffed by volunteers. But that’s technically a buying club, an outdated 1970s model, store manager Andrea Malloy says. Co-ops nationwide that are growing and successful have switched to selling shares and hiring paid employees, and Daily is following suit.

Don’t worry, it’s not turning to the capitalist dark side. Malloy and board chairwoman Delene Porter believe the changes will bring down prices and allow the Prince Avenue hole-in-the-wall to expand to become a true downtown grocery—one that’s beholden to local citizens, not far-off corporate executives.

For more than a decade, Daily sold annual memberships for $50 or $100 that came with a 5 percent or 10 percent discount. Volunteers who stocked shelves and manned cash registers got a 20 percent discount. Starting Feb. 1, those memberships and discounts go away. Instead, Daily is selling $100 shares and $20 annual “interests” that turn into shares when investors buy $100 worth.

What do shareholders get for their $100? In the short run, for themselves, not much. A vote at meetings, mainly, some specials and, down the road, possibly a dividend based on how much shareholders spend at the store. “The notion of a cooperative, it’s not what you get back, it’s what the community gets back,” Porter says.

The community, if the plan works, will get a locally owned grocery store near downtown that employs local workers, supports local farmers and sells locally grown food at a reasonable price. “Athens is ripe to have a really strong, independent grocery store,” Porter says. “We are downtown. But if we’re always struggling, we can’t meet all the needs the community has.”

The alternative is a chain grocery coming downtown, something many Athens residents opposed when Walmart was considering opening a store off Oconee Street last year. A corporate entity would decide where to locate, which vendors to use, what to sell and how much to invest. “Those decisions are all made somewhere else,” Malloy says. “The community has no say.” For the co-op, filling that niche would be impossible under the current funding model.

Daily’s board hired Malloy a year ago, in part to implement the patronage model, Porter says. The store was doing OK with $1 million in sales last year, but it’s been up and down, and it’s a constant struggle to train and manage dozens of volunteers, Malloy says. At 1,000 square feet of retail space, the store can’t stock a wide variety of items, and popular ones are constantly running out, she adds.

When the changes fully kick in next month, customers will notice a difference. Getting rid of the discounts will drive down the price of food for everyone, so the three-quarters of Daily shoppers who aren’t members or volunteers will pay less. “We can never compete with Kroger on affordability, but we might not—I don’t know how to say this—freak people out as much as we do now,” Malloy says.

Eventually, when enough money is raised, the co-op could move to a larger space (ideally, about 4,000 square feet), open a satellite store or sell food out of a truck. It could staff up from 21 mostly part-time employees to 100 making a living wage. If Daily hits $2 million in annual sales—something that would only be possible with more square footage—it can join the National Cooperative Grocers Association and buy wholesale products cheaper.

Right now, there are no concrete plans, though, Malloy and Porter say. “The sky’s the limit,” Malloy says. Hiring a consultant to do a feasibility study on expanding is the next step. “Those are pricey, but they’re one of the keys to failure if you don’t do one,” she adds.

Malloy and Porter acknowledge that their plans aren’t popular with everyone. Some members want to keep the co-op the way it is. “People are feeling criticized by our positive changes,” Malloy says. “I feel like it’s the opposite. Being so awesome is the reason we were able to do this.”