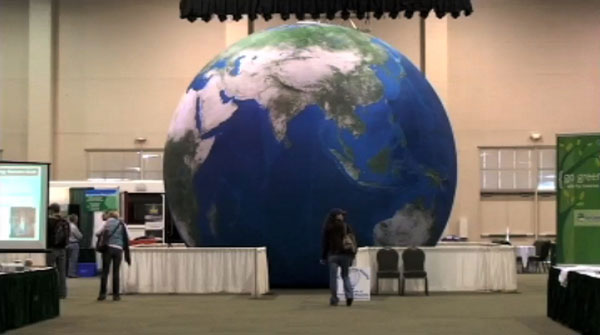 The local state of the art about “what green means” was on display in Athens during the last weekend of January. With shadows of old thinking and related sins stretching out like monuments to an uncivil past, the conglomeration of events was a kind of Groundhog Day for the new epoch. “Ferget, Hell,” as it were.

We as a society are becoming relatively open to, if not comfortable with, the trappings of eco-enlightenment. We now recognize many of the habits we should have had all along – using less, conserving more – and we’re beginning to understand how we might navigate consumer society with these responsibilities intact. We’re learning the powers of ridicule in service of compelling the delinquent and shaming the laggards. Athens is pretty proud of itself, and its merits are only contestable – there’s a city of the future in here somewhere, poking its head out of the present.

The Green Life Expo at The Classic Center brought much of this humble pride out for a public test spin. Corporate and government sponsors in media, construction, energy, waste disposal and recycling, plus myriad local services, put on an informative and earnest display of their current practices and hopes for the future, couched in the term “green.” A few openly embraced the affirmative promotional angle of saving the Earth and what it can do for you and your business. To the passing entrepreneur, this unmistakable component wouldn’t make it back to the office before it was customized for your outfit, and maybe that was the point. The profit aspect of green, after all, will prove the ultimate viability of viability itself in a capitalism-only society. If nobody’s buying the future, well, it will just take a backseat to something else lower-fat, better-tasting and all-natural and sit there until it, too, gets recycled.

To others who have ingested and invested themselves in sustainable practices, the Expo offered a great deal of information on “green” just beyond the marketing extravaganza phase, if not yet very deep into the details. Many participants agreed to speak on the record, with the glaringly odd exception of the folks manning the EPA booth (?), and revealed a professional integration of ecological thinking with civic incentives toward reaping the benefits of conservation. Companies representing solar hot water and electricity for the home, innovative roofing materials, even pest control, were present to extol the benefits of their products and services in the context of “being green.”

But being green and banking on it remain uncomfortable occupants of the same space. Put to a few of these same concerns, questions just below the sparkling emerald veneer proved frustrating. Questions of how new profit streams could be created in the face of flagging markets for recyclables, for example, were met with consternation. Questions concerning why the out-moded photo-voltaic approach to solar was preferred in the American market to the more innovative practices and products available in Europe were met with much the same, as was a query of whether a large, commercial organic farming operation is preferred to a network of many smaller ones. These points, while not conclusive by their answers, are indicative of the relative maturity of a movement and, thus, issues with which our sustainable business community needs to grapple.

And these secondary issues will come into focus, unless maturity of the movement is less important than its posture of activism. Unconnected but highly calculated to piggyback onto the Green Life Expo was the exhibit at the ATHICA art space during the same weekend. The conceptual show, “Running on Empty,” offered a group of disparate works developed and brought together to comment on the present state of environmental degradation and ecological cataclysm. The formulation itself offered no choice but to err on the side of raising awareness at the expense of the media used in the process, typically known in this construct as the artwork.

Anything enlisted in adding to the statement was deemed art, its extents knowing no bounds or limits in the service of the idea. In this megacosm, the execution and aesthetic appeal of the artwork itself must take a backseat to its concept and meaning, becoming materially less significant, less important, than its underlying message. By this logic, the Green Life Expo was also (just) an art show, as are the words on this page; as well the spaces between the words – themselves a statement on the need for silence, or is it the limitations of written language? You see the problem here.

Once you subvert the essence and power of art for any other purposes, you have, well, read the first part of that again. Any idea, even our self-preservation, can become hostage to its own gimmick. This is what happens to the great corpus of conceptual art – unless the idea is to leave us feeling dull and empty. Once the door has been opened, one must admit that possibility. Conversely, we must reserve the right to have some things stand for nothing but our inability to comprehend them.

“Running on Empty” wielded a perhaps inadvertent power in the service of its concept: As unconscious about what it was doing to art as we have been about what we are doing to the planet. Like us, the organizers don’t really care because it all seems quite harmless when in fact we already know what irreversible damage has been done. It’s an uncanny fusion I can’t help but cautiously recommend.