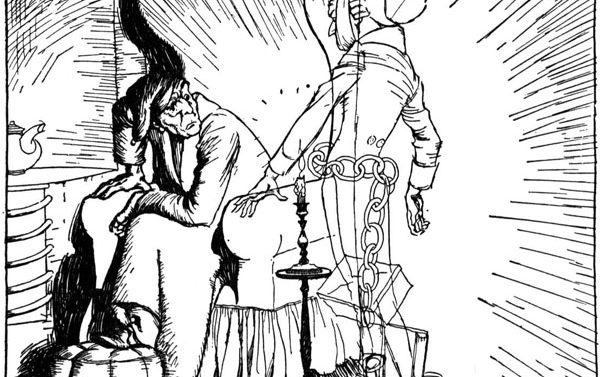 In December 1843, Charles Dickens did a hell of a thing. The son of a debtor, Dickens found himself drowning in debt as well and penned a Victorian morality tale in a desperate attempt to ease his financial burdens. The story we have come to know as A Christmas Carol was written in the span of six weeks. No publisher would touch it, and so Dickens published it himself. The book was ready just before the holiday that it celebrated and all 6,000 copies sold out in the span of a week. It became a holiday institution immediately, its popularity serving to “redefine the importance of Christmas and the major sentiments associated with the holiday,” according to Wikipedia.

Dickens’ hero, Ebenezer Scrooge, had lost all use for the human endowments of charity, community, friendship and love. In fact, he demonstrated contempt for anything but money – a pose that has been greatly admired in our own culture until rec… well, we have at least sought comfort in epithets like conspicuous consumption and luxury tax. The analogy brings up some uncomfortable comparisons to go with our holiday cheer.

With our ability to supply basic necessities at a zenith, we strain for meaning and stimulation, indebting ourselves to buy things for a holiday we swear is not about material objects. We accept gross inadequacies in national and local healthcare, energy use and environmental degradation, the plight of those beyond our borders reduced to fables. If the ghost of Jacob Marley returned tonight, what bleak landscape would he threaten us with as an eternal post-mortem walking tour? Wait. Don’t answer that just yet. Viewing the world through the lens of consumption, we interpret events in the language of commodities. We’re perfectly at home with these unimportant distinctions between consumers and citizens (neighbors?), yet the only thing that preoccupies us more at this time of year than Christmas are the moments of consternation at how crass and commercial it has become.

Instead of ghosts, perhaps our dreamscapes are inhabited with the representative elements that first appeared as improvements to daily life, only to become seeds for greed and short-sightedness as they gave rise to our modern society. Christmas Past might feature a child waking sweetly on a long drive with her parents to Grandma’s house. She might peer over the big backseat of a large automobile and ask, “Papa, are we there yet?” and he might answer, “Yes, Angel. Thanks to the new Interstate road system, we’ll be there in another few minutes!”

“If we only knew then what we know now,” we might say. But what would we do differently? If we could revisit critical junctures, would we choose to begin down a more sustainable path?

Christmas Future would surely take place in that green, green landscape of the BP and IBM commercials, where birds chirp and squirrels chase deer and all sorts of other nonsensical pastimes envelop us in open meadows while we pull on rainbow cigars. The future would have to be particularly incoherent and disorienting in order to be sufficiently post-whatever we’ll be over by then. To pull this off, the virtual reality rendering might crash into a smoky apocalypse to really get our attention. The idea that what we find would tug at our innocence enough to invoke a specter of regret is both the genius of the Dickensian cliché and wishful thinking. Scrooge was savvy for his day, but we have fourth graders who would have him for lunch.

It’s Christmas Present that is the problem. How do we see ourselves at this particular juncture? More attention is being paid the loss and destruction of water, minerals, oil, trees, fish, soil and air than ever before. Yet the prices for most raw materials are near historical lows and continue to fall. Supplies are cheap and appear to be abundant as technology continues to stay just ahead of depletion. Richer on a grander scale than ever before, the resources upon which civilization depends to create economic progress are declining at a rate proportional to the gains in material well-being. We are thriving, and yet the quality of our finest moments seems diminished.

Do we admit the disjuncture about the way we live and all it takes to support it? How about the one that really makes a mockery of Wall Street, that the earth is a closed system? Would we be startled by a solution waiting just outside our reach, ready for us to take charge if we might dare?

A Christmas Carol is not known as an irreligious text, but note the lack of religion in Dickens’ tale. We get all exercised about presents, but exchanging gifts was the birthright of the pagan holiday, Sol Invictus. Let’s give it back – or better yet, announce where it came from. Notwithstanding the nefarious ploys of being “drawn away by the foolish errors of heathendom,” do these not both attempt to consecrate the One and True Light?

Ah, the sun. Sol Invictus, the unconquerable sun god, had already made December 25 a holiday; the early Christians were chastised for being unobservant until they begged and borrowed and made the post-solstice feast their own. The Romans were just the next in a long line of people trying to remain in good stead with our main star. Perhaps we would do well to take our place in that procession. The moral hymn of our day is waiting to be written or perhaps we just need to re-read an older one to be reminded that we, too, need to change our ways. Dawn we now?