We Shall Overcome… Or Not

He laughed, “Yes, ‘Everybody’s happy nowadays.’ We begin giving children that at five. But wouldn’t you like to be free to be happy in some other way,… ? In your own way, for example; not in everybody else’s way.” – Aldous Huxley, Brave New World 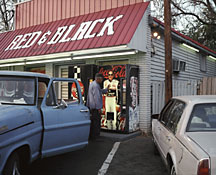 Anyone who thinks we’ve overcome the paternal condescension that marked the history and much of the present in the “two-society South” is, as they say, not from around here. When something is nowhere to be found, it’s a safe bet that it has either disappeared completely or is utterly everywhere and hence, goes largely unseen. The retrospective of 33-year-old Athens photographer Jason Thrasher at Mercury Art Works confirms that the comfort we provide ourselves about our progress is counter-weighted by the detachment of our dreary fascination with how backward we are.

Although, let’s not mince words here; “we” does not mean us, per se, and it’s an important distinction in the lexicon of post-irony. The concept of presenting visual imagery is now a vicarious portal through which we re-enter the strange world we already live in to ogle the carnage and leer at the anti-heroes… or shrug.

The large color prints Thrasher presents at this show are utterly pliant and real as a statement, but not about the subjects. Rather they seem to infer that we must continue to exploit the white-trash aesthetic as exotic in order to preserve our credibility with outsiders: the cultivated, urbanized enlightened of whom Athens is in no short supply.

The savvy of ambivalence is posited versus implied ignorance, overgrown weeds and trailers; from this show, these are the virtues by which Southerners have emigrated their starry, tin-roofed fate throughout the country. Indeed, though well-seeded in this region, Thrasher finds the Southern Gothic alive in Oregon and other points north and west, the evidence of which might intimate many things. But we are forbidden from delving too deeply, for the safety in distance has become the form.

But what do the faces in the photographs say to us? We don’t know because they’re not close enough to see and are thus, we may infer, beside the point. Is there something else about the composition that matters more than the image? Within the form is another nod that is unmistakable; this work implies that, as viewers, we needn’t identify with the subjects as much as with each other, and the curtailing of this interaction is significant. Thrasher seems content to let us stand back and leer at the conglomerations of buildings and figures, the lines and forms – which perhaps are important and meant to appeal to some deeper notion or aesthetic, I don’t know. But it is a dreary experience, one that I’d be just as sure to find in a still above the scroll on CNN Airport.

Whether deliberate or not, it is a reductive distortion of modernism, and through it photography becomes merely a means of aesthetic commentary. That’s why it leaves us so cold and unfeeling as we grow used to it, as opposed to flipping through a monograph of the work of Evans or Frank and feeling oneself in direct contact with a presence that was once in the lens’ crosshairs. Sure we’re generally undernourished as far as visual art goes, but we can still know what we like and recognize the reduction of that to a send up of it. 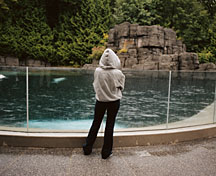 Photography can, among other things, present faces and emotional composition to interact with or land – and people – scapes to portray context or perspective or examine a condition through experience. But by including subjects just to keep them at a distance, Thrasher has simply given in to the impulse to document and therefore sidelined the viewer’s opportunity to imagine. No greater evidence of this is needed than the four black-and-white images Thrasher captured while in India a few years back and also included in the show. He’s shown them a few times before and, whether they’re brilliant or beautiful is for the spectator to decide. But they do represent a moving experience that transcends the one between 2-D image and spectator. We can debate whether or not either one of these is art, but I suspect it is a question we should be asking more, not less.

But it is difficult to stand so far back and ask that question. The conversation becomes so pedestrian that we tire of it quickly, as though that was the intent, or feel it is some joke we’re not in on. Never mind the human side, this work infers, look at what their “story” says about us, how far we’ve come in being able out to point out the absurdity of small-town, factory-job, dead-end bliss. It’s a nod to our humble pride at the achievement of our lofty sensibilities. Wal-Mart, suburbs, rural poverty, rednecks, NASCAR – it’s code for the red states. But where is the intersection between them and us? Does that question even matter as we “celebrate” their culture? In the lofty spires of art gazing, even in Athens, this acknowledgment cements our credibility on the critical issue of our own tactful self-regard.

Maybe photographers fall so deeply in love with the image that it conspires to infringe upon any moving or profound experience that might use the image as a portal between the photographer and the viewer. Yet doing so renders onto the work all the power of an empty slogan and, because we’re already so familiar with those, greases the skids further for the medium’s slide into convincing people that it, too, doesn’t matter. After all, why should we care about seeing dreary regurgitations sufficiently detached from our reality to preempt any pathos whatsoever? Isn’t that what most of pop culture already peddles? And alas, this is the best-case scenario.

The other possibilities are more fundamentally pernicious to the phoenix of creative imagination. If art is supposed to make the viewer feel as if it is somehow beyond understanding, and therein lies its final intrigue, perhaps it’s coming full circle. With the echo of a random insult, this work’s currency is a type of harmlessness that is killing us softly with ambivalence. There is no greater cancer, as any observer of our society’s civic or intellectual life will attest.

Everyone who is physically able should go to Mercury and see Thrasher’s show. There, you can see for yourself what one local photographer presents as rising from the ashes of post-modernism: a detached sense of remembering that you had someplace else to be.

This Is For You