Living On The Street 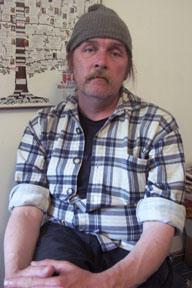 Longtime Athenian Evans G. (Rick) Baker is one of many homeless people trying to get by here in spite of the odds. He recently sat down with Pete McCommons and talked about his situation – how he came to be homeless, how he hopes to get “a hand up.”

Flagpole: How long have you been in Athens?

Rick Baker: I moved here in February of 1970, and with the exception of four or five years I’ve been in and/or around Athens in one sense or another.

FP: How did you make a living?

RB: I had a couple of trust funds. That was a very sad and sordid chapter in my life. That was thrown out and a banking organization walked into the situation where they became fiduciary administrators of the trust fund that was left to me. That was a bitter and sad and sordid chapter of my life, because they did a really good job of messing up an investment which they had total control over and I had none. I went through what I would define as a trust fund horror story for quite some period of time. I had another trust fund with a banking organization up in Connecticut, which was what it was meant to be administratively. Like Dickens says, “A Tale of Two Cities?” Well, my life at one point in time was a tale of two banks, one of which was a good friend and the other was on the bottom profit line.

FP: So, that money is gone.

RB: That money has been long since gone.

FP: Have you been in trouble with the law?

RB: I got into trouble and was charged with burglary and criminal trespass and eventually an out-of-court settlement was reached and charges were dropped.

FP: Were you using drugs?

RB: I’ve got to be honest about that. Yes, I’ve used drugs in my life. I got strung out on amphetamines when I was 17 years old, and I got myself off them. That was a valuable and important lesson. The problem that I had over a long period of time was alcohol. I have a less severe form of alcoholism called “experimental.” You don’t have a physiological addiction to the alcohol. You don’t go through withdrawal. In about 1997, I pulled out and away from alcohol, and at this point in time I’ve been 14 or 15 months totally dry. People ask me, “How do you feel about it?” and I say, “Look, I’m not missing it at all. I’m here in reality.” The last few years I’ve been back here I’ve had a stronger sense of community. I go the extra mile. I do anything and everything I can to help other people.

FP: But that time you were in trouble with the law, that was the only time?

RB: Oh, I’ve been in jail more than that. Early ’80s I was arrested and convicted for the cultivation of marijuana. And then I was placed on probation by Judge Barrow… Then I started having troubles with alcohol, and I picked up another misdemeanor charge for marijuana possession. And then I got stupid and didn’t show up in court and got a revocation warrant, and then I spent eight or nine months going through the Clarke County jail and the Athens Diversion Center. And then I’ve done all kinds of things, little things: bad checks…

FP: You’ve been homeless since your wife died?

RB: Not totally. It’s coming up on about two years that I have been in that situation, and it’s been a tough two years.

FP: Have you stayed in shelters?

RB: I have not even tried any of the shelter arrangements. At the Salvation Army you have 10 days to find full-time employment. With physical disabilities, my age, it’s much harder for me in the job market. I have not gone that route. I have not stayed in any shelters. Why go down a way that is only going to be a partial solution to a problem? They’ve got a gun to your head saying you’ve got to find a job in 10 days. I’ve been in worse situations, where it’s taken me the better part of a month. When I was in the Athens Diversion Center, it took me about five weeks to find full-time employment.

FP: Where are you sleeping?

RB: I probably exist on cat naps here and there. I go in a coffee house and buy some coffee and doze off for a little bit here and there. Basically what sleep I’ve been getting is in naps.

FP: Where do you get money for coffee?

RB: There’s a couple of people here in the community that have given me some help, but what resources they can give me is limited at best, just getting me from today into tomorrow. Diet is critical for a diabetic, anyway. I go for long periods of time not eating. It tends to make me become progressively more hypoglycemic. If I don’t eat over a period of time, I could go into a convulsion and die.

FP: What are your prospects? What do you hope for?

RB: This is something that I’ve had a lot of thought about. Handouts are very short-lived and would fall into temporary solutions. What I’m needing is a hand up. I have responsibilities in it, but there’s got to be someone at the other end that is helping to get me to a situation where I’m up and out of this hole. And it’s real easy to say. We have a lot of complicated times and issues that we’re dealing with in our war right now. So it seems easy to say, but it’s very hard to get: people or individuals who are in a position to bring about the hand up and out.

RB: Employment is one thing, but you look at what comes with the territory of employment. There are certain expectations: you have to have good hygiene. You have to have clean clothes. I have clothes, but I would need help with being able to get clean on a regular basis. Some type of temporary living arrangement. But things have to be open and very clearly communicated and defined: any obligations and responsibilities that come with that. Whoever is offering this has to be open and honest about who they are and whatever problems or issues they might have. I have to be the same. I got back here. I was gone for six months last year. I got back here last November. A friend picked me up at the bus station, took me to another friend’s where I was staying for the night, and he told me that the university had a hiring freeze. This situation has been in place for two years now. The most viable avenue of employment, what I’m qualified, what I’m trained to do has to do with computers and technology, and that’s not available to me.

FP: What do you do? Are you current with what’s going on in computers and technology?

RB: Yes. I know how to build, repair, fix, troubleshoot for IBM PC related platforms. I have had a involvement going back to the late ’60s, when the whole world of computers was far different than it is today. I spent four years off and on learning computer tech and then did an internship at a small business. Are you familiar with the term “freelance?” I traded my time and effort and labor and received good training, plus had a good background.

FP: Realistically, what are your prospects?

RB: What prospects I have, I don’t know. I don’t have an ability to readily connect to other people. I don’t have a cell phone. I do have some contact information.

FP: Do you have email?

RB: I do have an email address. One thing I didn’t talk about: in this community, I’m considered a community leader, because I’m very strong and proactive about things. I make a stand on what I think and feel and believe. I’m very involved right now with the Iraq war protest. I am a member of the Mid-Atlantic chapter of the VVAW, Vietnam Veterans Against the War. I believe in people, and when people put their heads together and work together, answers can be found… I’m a leader in this community, and there’d be lots of people who would come out of the woodwork who would verify that.

FP: Are there any people who are going to come out of the woodwork and say, “What the hell are you doing, running an article about that guy? He did this or he did that… “

RB: Well, there’s a good side to me; there’s a bad side to me… I have friends here in this community; I have enemies as well. There are people in the business community that know me. I had a lawyer here in the downtown community tell me I’m an idea person, and I am. But, if I get ideas, if I don’t have any means or ability at my disposal to implement them into reality, they just lapse. I’ve got a business idea. I’ve talked long and strong about it to a lot of people. It’s what’s held me together most recently.

FP: How would somebody get in touch with you?

Coach T Delivers, Not That It’s Any Of Your Business