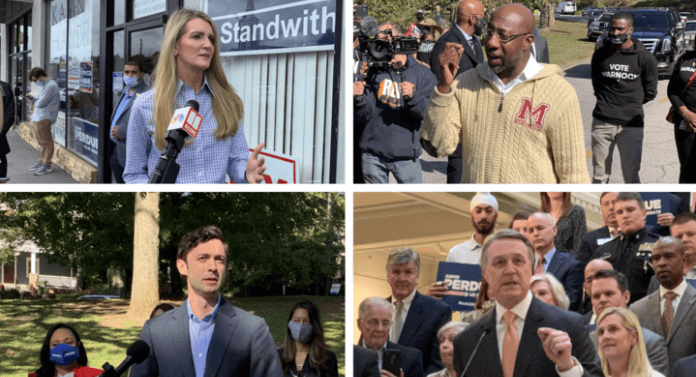 Soon after the Nov. 3 general election, it was clear Georgia voters set up two U.S. Senate contests for this week, and it seemed unlikely the presidential result would threaten to overshadow the high stakes battle at the ballot for control of the federal government.

But when President Donald Trump campaigns for fellow Republicans and Georgia U.S. Sens. Kelly Loeffler and David Perdue at a Dalton campaign rally Monday, the GOP’s hopes to keep control of the Senate could hang on the confidence party loyalists maintain in the state’s election apparatus.

Over the weekend the president berated Georgia Secretary of State Brad Raffensperger in a hour-long phone call for not overturning the state’s presidential election results and that could cause lower turnout for the GOP incumbents if voters think the election system is rigged. Trump has campaigned for the senators in recent weeks while claiming without evidence that he won an election certified for President-elect Joe Biden.

For his part, Biden is coming to Atlanta Monday in an 11th-hour bid to get Democratic challengers John Ossoff and Rev. Raphael Warnock across the finish line.

Polling consistently shows the two contests neck-and-neck, which isn’t surprising since the two races were pushed to a runoff after none of the four candidates got more than 50% of the vote on Election Day in November.

The stakes? Loeffler and Perdue pledge if they both win, they will serve as a firewall in the Senate if Democrats fail to secure a majority, preventing a sweeping shift to Biden’s priorities to expand access to health care and increase efforts to control climate change. Ossoff and Warnock say they will back Biden’s agenda with two reliable votes. The runoffs have drawn unprecedented attention to Georgia with the rare prize of two difference-making U.S. Senate seats on the same ballot.

Both sides have teamed up on the campaign trail with messages that echo their party’s teammate.

If both Warnock and Ossoff are victorious in the Jan. 5 runoff, Democrats will control 50 seats in the Senate, with Vice President-elect Kamala Harris able to break ties. If either Perdue or Loeffler hang onto their seat, the Republicans will keep the majority in the Senate, which they can use to scuttle the new president’s plans.

Georgia runoffs are typically sleepy affairs, but already more than 3 million voters cast ballots in the runoff’s advance period. In addition to the two senate races, a Public Service Commission seat is also on the line Tuesday as long-serving Republican Lauren “Bubba” McDonald takes on Democratic challenger Daniel Blackman in a statewide contest for a seat on the state utility regulating panel.

Number crunchers who analyzed the early voting trends in the runoff say the Democrats appear to have built a lead in the Senate runoffs the GOP will need to overcome on Tuesday.

Turnout in northwest Georgia’s more rural counties, for example, was less than three-fourths of the comparable general election showing, according to data blogger Charles Hayslett. Population centers that are reliably Republican in recent elections like Carroll, Cherokee and Floyd counties are at 70% of their voter participation rate at the same point in the November general election.

Meanwhile, turnout is strong in metro Atlanta’s Democratic strongholds with DeKalb, Fulton and Gwinnett early voting and absentee ballot participation tracking close to 80% of the Nov. 3 turnout. Cobb is the only one of the most populated counties that significantly lags behind the others with 72.5% of its general election participation.

Last month, some Cobb voters said they turned out early to avoid lines and lock in votes for their candidates. As in the general election when nearly 5 million Georgians cast ballots, some voters said they hadn’t gotten their absentee ballot and wanted to ensure their choices were counted by showing up in person.

“I didn’t know what to expect,” said Lizeth Matzier, who said she voted a straight ticket for the Democrats. “I heard some people say it was quick, that’s all I heard, but 45 minutes, to me, wasn’t bad compared to what it was like in March. It was like 10 hours, but I ended up not waiting. I just decided to just use my absentee ballot instead.”

Canceling out Matzier’s vote was Diane Pruitt Dewane Stinebring, who said one issue made her decision easy.

“I know Warnock is a preacher, but when you stand up for abortion, there’s really something very wrong,” Matzier said.

She also dropped references to socialism and defunding the police, two inescapable GOP messages for anyone with a TV who watched just about any programming the past two months. Hundreds of millions of dollars poured into the state in the past two months, a record-setting haul with most of it going to Democrats.

The Democrats have pounded the airwaves with a rally cry echoed by Biden that their party can be counted on to take on COVID-19 with more urgency and to pass larger relief packages to help the economy and protect workers from economic pain caused by the pandemic.

Monday’s dueling election eve rallies featuring Biden and Trump are unpredictable affairs, except that past campaign events indicate the president-elect is going to encourage mask-wearing, and the president’s crowd is less likely to abide the advice of public health officials to cover their nose and mouth when in close quarters.

And will the president continue to call for secretary of state and Georgia Gov. Brian Kemp to overturn the election results when he visits Dalton Monday as he did in early December? Republican control of the U.S. Senate could depend on his ability to motivate his most loyal supporters placing faith in an election system that he says is rigged but has survived repeated stress tests since Nov. 3.

Ross Williams contributed to this report, which originally appeared in the Georgia Recorder.