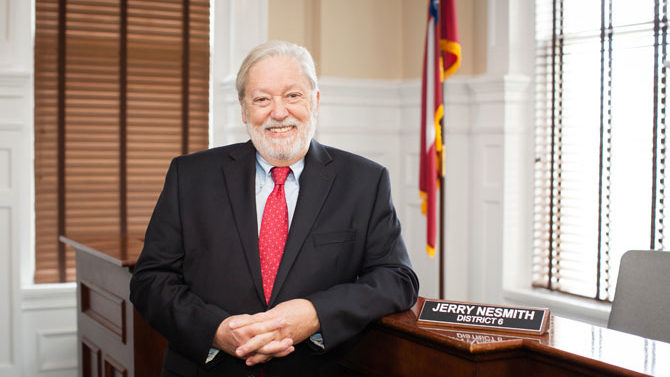 Athens-Clarke County Commissioner Jerry NeSmith has died in an apparent accident. He was 71.

“We are heartbroken to learn of Commissioner NeSmith’s tragic passing,” Mayor Kelly Girtz said in a statement. “Jerry was a fierce advocate for the businesses and residents of his district, the Westside of Athens, the Athens Farmers Market, Advantage Behavioral Health Systems, the Greenway, and the Atlanta Highway corridor. His passion and energy will be sorely missed in this community. Our condolences go out to his friends and family during this unbelievably difficult time.”

ACCPD said they and the coroner are investigating NeSmith’s death, but it appears to have been accidental. He suffered from a fall at his home, according to Commissioner Melissa Link.

NeSmith was born in Decatur, AL, and went to high school in Wichita, KS, where he met his wife of over 50 years, Farol. He attended the University of Wichita and graduated from the University of Alabama, studying information technology.

He became involved in politics while living in Atlanta and fighting a proposed freeway through his neighborhood. After moving to Athens to become the director of UGA’s IT department, he was appointed to the ACC Planning Commission, where he served for 10 years before running for county commission in 2012.

In addition to Farol, he is survived by their son, Jason, a musician who performs with Casper & the Cookies and Pylon Reenactment Society, and daughter Noel, a nurse practitioner who lives in Chattanooga.

NeSmith was up for re-election this year and faced challenger Jesse Houle. If NeSmith wins Tuesday’s election, a special election will be held to fill his seat.

“Whose Streets? Our Streets!” Photos from Justice for Black Lives