Mayor Bob Smith Is at Odds With the Watkinsville City Council 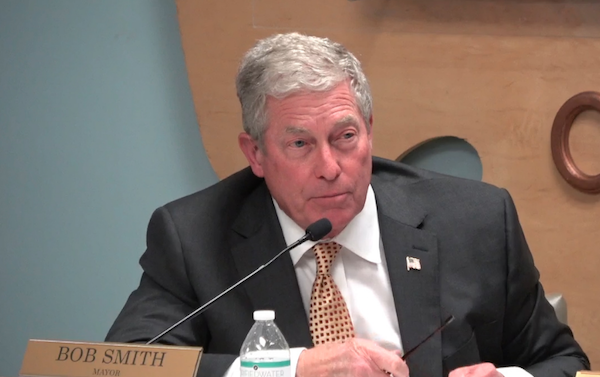 The mayor votes only in the case of a tie, and the council approved the plan in a 3 to 1 vote.

Smith strongly opposed the site development plan submitted by Oconee State Bank for its new headquarters at 41 North Main St. Council approved the plan 3 to 0, with council member Brian Brodrick recusing himself from the discussion and vote. (Council member Christine Tucker was absent from the meeting.)

Smith argued against the city signing a letter of intent with Extra Special People for discussion of a collaborative development of Harris Shoals Park. Council voted 4 to 0 to approve such a letter.

Smith argued against approval of a contract to recodify and restructure city code, questioning the amount of money to be spent. Council voted 4 to 0 to approve the contract.

The mayor asked the council to undertake a forensic audit of the city’s financial records and rezoning documents. No one on the council expressed any interest in such an audit.

Council did unanimously approve, at the mayor’s request, appointment of Jonathan Kirkpatrick to the Oconee County Planning Commission.

Even without a vote, the mayor controls the agenda once the meeting starts, and Smith, in his third meeting in that role, demonstrated that power by holding the group for his mayor’s report near the end of the nearly four-hour-long meeting.