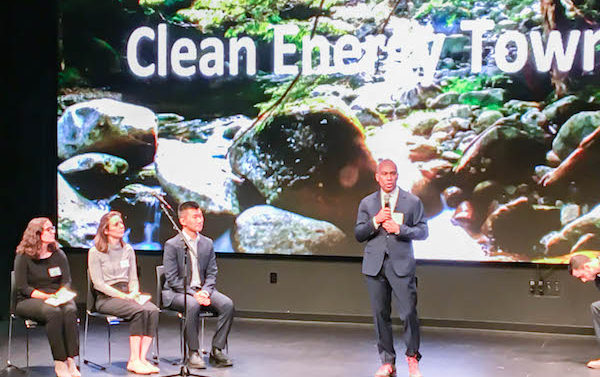 NEW HAMPSHIREâ€”Students at a youth climate town hall extracted promises from several presidential candidates that their climate-change policies will benefit low-income people, not hurt them.

â€œEquity has to be at the heart of climate policy,â€ said Pete Buttigieg, who appeared at the NH Youth Climate and Clean Energy Town Hall Wednesday morning, hours after partial returns showed him in first place in Iowaâ€™s Democratic caucuses. The former mayor of South Bend, IN was responding to Dartmouth College MBA student Melina Sanchez Montanes, who asked what he would do to make sure low-income households â€œdonâ€™t bear the brunt of the transitionâ€ to cleaner energy.

Buttigieg cited his plan to fund a $250 billion clean-energy bank that would fund local energy projects, especially in disadvantaged communities. His plan to fund one million national-service jobs a year includes a climate corps, he noted. â€œA big part of what it would work on is projects that benefit economically vulnerable people,â€ Buttigieg said, including â€œweatherization of low-income seniorsâ€™ homes.â€

Six presidential hopefuls answered questions from New Hampshire students at the all-day event in Concord, sponsored by Dartmouth College and other nonpartisan hosts. Eight candidates had RSVPed yesâ€”including all the major Democratic candidates except Joe Bidenâ€”but the US Senateâ€™s vote on President Trumpâ€™s impeachment scrambled the bookings of the four senators running for president. Bernie Sanders and Elizabeth Warren sent surrogates to the event, Michael Bennett of Colorado cancelled due to impeachment, and Amy Klobuchar of Minnesota moved her appearance to 8:15 am so she could catch a flight to Washington.

Klobuchar said sheâ€™d propose carbon-pricing legislation during her first week as president. â€œWe have to make sure that money goes right back to people, to help with their heating and their cooling bills, or weâ€™re never going to get it passed,â€ she said. â€œSome of that money will go to incentives for areas that are going to see job changes.â€

Two students on a three-student panel pressed for details. â€œWould you support a carbon pricing bill that would give more rebates to lower income and rural communities?â€ asked Beatrice Burack, a 16-year-old student at Phillips Exeter Academy.

Clarice Perryman, 26, a PhD candidate in earth and environmental science at the University of New Hampshire, asked Klobuchar how sheâ€™d help fossil-fuel industry workers with the transition to a clean-energy economy, especially those who â€œmay be unable to be retrained for new jobs.â€

Klobuchar said her policy included â€œmaking sure we have replacements for the jobs that are going to change,â€ whether in green energy or other industries. She talked about job training, apprenticeship programs, and her proposal to double the size of the federal Pell Grant program.

Afterward, Perryman said sheâ€™d hoped to hear more. â€œThere are workers who have worked for mining and power plants for 40 or 50 years. Because of their health, or age, theyâ€™re unable to be retrained or donâ€™t want to be trained. What are you going to do to support those people?â€

William Weld, the former Massachusetts governor challenging Trump in the Republican primary, said he would also seek to place a price on carbon, either through an act of Congress or a national emergency declaration. He said his bill would redistribute carbon fees to lower-income taxpayers through the income tax to fight poverty.

â€œIâ€™m a big believer in the notion of environmental justice,â€ Weld said. â€œMinority communities, which have fewer defenses to the negative impacts of societal and economic changes,â€ might get â€œa bit of preferential treatmentâ€ in his policy, he said.

Deval Patrick, another former Bay State governor, noted that he had committed Massachusetts in 2007 to the Regional Greenhouse Gas Initiative, a cap-and-trade program among northeastern states. Pressed by Katelyn Fournier, a 21-year-old biology major at Keene State College, to talk about his plan for vulnerable communities and the climate, Patrick called the growth of clean-energy technology a chance â€œto create opportunity and wealth, focused in communities where people have been chronically left behind.â€ In his closing remarks, Patrick, who is black, thanked the students for noting that â€œit is often people who look like me who are right in harmâ€™s way.â€ 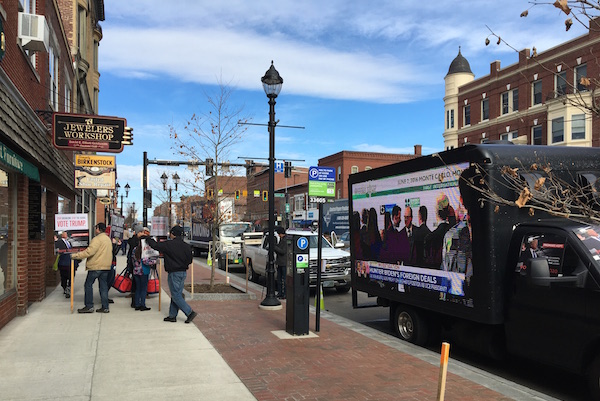 The Trump truck was parked Wednesday morning on Main Street in Concord, the stateâ€™s capital, outside a theater hosting the NH Youth Climate and Clean Energy Town Hall. News footage of presidential candidates including Elizabeth Warren flashed on the truckâ€™s sides, but most of the clips focused on Joe Biden, including vintage clips of the former vice-president addressing the plagiarism scandal credited with knocking him out of the 1988 presidential race. Seven Trump supporters gathered around the truck, waving Trump signs.

â€œInvestigation: Hunter Bidenâ€™s Foreign Deals,â€ read the banner from an ABC News clip playing on the black truckâ€™s sidesâ€”hours before the Senate acquitted Trump on two impeachment articles, including the abuse of power charge involving Ukraine, Joe Biden, and his son.

The truck belonged to a pro-Trump PAC, the Committee to Defend the President.

â€œWeâ€™re outside of the Democratsâ€™ â€˜climate changeâ€™ event in Concord today offering up free hamburgers,â€ the PACâ€™s Twitter feed, @Defend_Trump, said this morning.

Outside the theater around lunchtime, a Trump supporter announced the offer of free hamburgersâ€”prompting a shouting match between him and a bullhorn-wielding supporter of perennial presidential candidate Vermin Supreme, with members of the New Hampshire Sierra Club, holding â€œVote for our future: act on climateâ€ signs, caught in the middle.

Donna Sellers of Bristol, New Hampshire, who joined the pro-Trump protesters with her 12-year-old daughter, expressed disinterest in climate change.

â€œI donâ€™t really feel it should be that big an issue,â€ Sellers said. Environmentalists in the U.S. should â€œconfront Chinaâ€ about its carbon emissions, she said, and the federal government should seek to curb carbon emissions with incentives, not punishment.

The Committee to Defend the President has spent more than $4 million in the 2020 election cycle as of late October, on projects including a drive to register pro-Trump voters. It began as an anti-Hillary Clinton PAC in 2013. Within minutes of US Sen. Mitt Romneyâ€™s announcement today that he would vote to convict Trump of abuse of power, the PAC posted a Facebook message calling him a â€œRINOâ€ and demanding his resignation.

This article was produced by the Boston Institute for Nonprofit Journalism as part of its Manchester Divided coverage of political activity around New Hampshireâ€™s first-in-the-nation primary. Follow our coverage @BINJreports on Twitter and at binjonline.org/manchesterdivided, and if you want to see more citizens agenda-driven reporting you can contribute at givetobinj.org.

Long-Awaited Bar on Oglethorpe Is Open