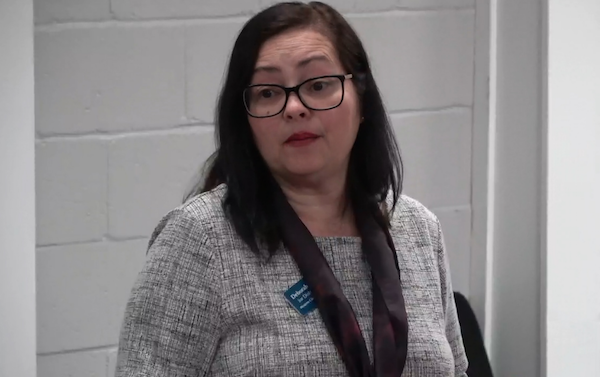 Deborah Gonzalez and Andrew Ferguson used the opportunity of the meeting of the Oconee County Democratic Party last month to introduce themselves to those in attendance.

For Gonzalez, it was a matter of a re-introduction, and she said she was going to respond to the “first question most people ask me.”

She said she was running for district attorney of the Western Circuit, which includes Oconee and Clarke counties, rather than to reclaim her seat as District 117 representative to the Georgia House because she thinks she will have “the biggest impact” as district attorney.

Andrew Ferguson was new to the group, so he spent more time talking about his background, his motivation for wanting to challenge U.S. Rep. Jody Hice, the incumbent Republican in District 10, and his stands on a number of issues.

Ferguson said his family struggled with health issues while he was growing up, he believes that “everyone should have health care regardless of their ability to pay,” and, in his view, Rep. Hice has not addressed the needs of the district since he assumed office in 2015.

Both Gonzalez and Ferguson are from Athens. Both have opposition in the Democratic primary on May 19.

Brian Patterson, chief assistant district attorney under retiring District Attorney Ken Mauldin, also is seeking the Democratic Party nomination. So far, no one has announced for the Republican nomination.

Others in the Democratic race to run against Hice include Tabitha Johnson-Green, a nurse from Sandersville, who won the primary in 2018 and then lost to Hice in the November general election. Hice received 63 percent of the vote to 37 percent for Johnson-Green.