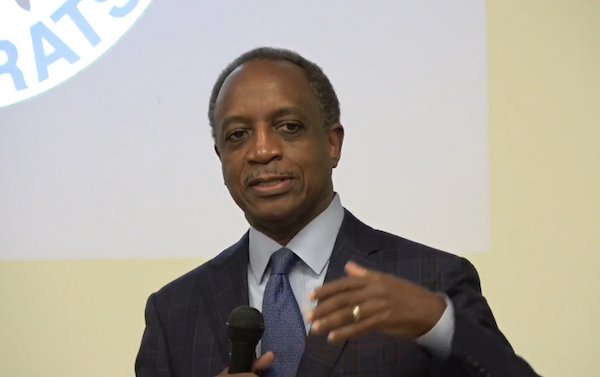 Oconee County is an excellent opportunity for Democrats, DeKalb County CEO Michael Thurmond told a gathering of party members at the Bogart Library earlier this month, because of the demographics of the county.

The county has one of the highest educational levels in the state and in the Southeast, Thurmond said, and the college educated, and particularly college-educated women, are being targeted by Democrats nationally.

In the Atlanta suburbs, Thurmond said, college-educated white women were crucial in 2018 in turning areas that normally vote Republican to the Democrats.

Thurmond was the featured speaker at the Democratic Party meeting on the occasion of the publication of the third edition of his book, A Story Untold: Black Men And Women in Athens History.

The former Georgia labor commissioner and state representative from Athens devoted two-thirds of his talk to politics, giving a political pep rally for those gathered.

“Georgia is on the verge, on the cusp of ‘flipping,’ becoming purple,” Thurmond said. “One of my most earliest prayers is that I live long enough to see Georgia blue again.”