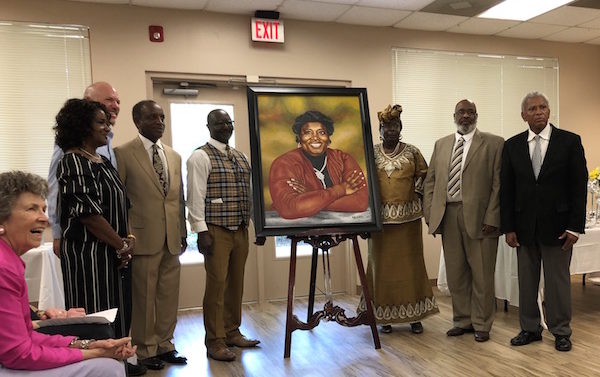 A portrait of former Athens-Clarke County Commissioner Miriam Moore hangs in the community room of the East Athens Development Corp., a nonprofit she helped start, in a former elementary school that’s now named after her.

Community leaders unveiled the portrait at a ceremony Saturday attended by about 100 people who knew or were influenced by Moore. Known as Mimi, Moore fought to bring social services and quality affordable housing to East Athens before, during and after her four years on the Athens City Council and ACC Commission. She was the first African-American woman elected to both bodies in 1988 and 1990, respectively.

Along with the late Jessie Barnett and Evelyn Neely, Moore helped revitalize Triangle Plaza and create the Classic Center, EADC, Athens Neighborhood Health Center and East Athens Park. The Miriam Moore Community Service Center on McKinley Drive was named for her in 1999. She died in 2006 at the age of 80.

Moore’s strongest attribute was her stubbornness, said Gwen O’Looney, who served with her on the city council and as mayor after unification. O’Looney noted that the Moore, who cooked in a sorority house for a living, ran for office three times before winning.

“Anybody here who doesn’t know what it’s like to lose twice and come back doesn’t understand Miriam Moore,” O’Looney said.

“Now, when I jump up and speak, it’s because of them,” Smith said.

“I’ve even been trying to figure out how to use some of Dekalb County’s money,” Thurmond joked.

The highlight, however, may have been Lee Eunice Smith reciting the Langston Hughes poem “The Negro Mother.”

Moore’s daughter, Susan M. Pittard, was present for the unveiling.