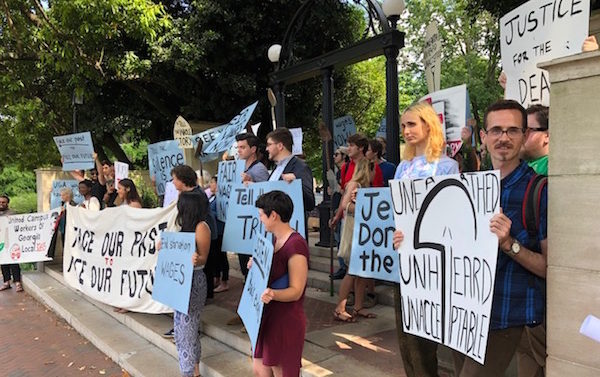 A week after they first sought a meeting with UGA President Jere Morehead about the university’s handling of slave remains found underneath Baldwin Hall, protesters gathered again for what one activist, Imani Scott-Blackwell, dubbed #MoreheadMonday.

“President Morehead, what you need to do is listen,” said Linda Lloyd, executive director of the Athens Economic Justice Coalition. “Don’t fight. Listen.”

The group of about 50 gathered at the Arch on Monday afternoon before marching through North Campus, waving signs and chanting slogans. They paused briefly at the Administration Building—where campus police threatened to arrest them last Monday—but did not try to enter the building. It has remained locked since a confrontation Thursday with a sign posted on the door stating that “expressive activities are not permitted in interior spaces.”

The university has not responded to an inquiry about which policy prohibits such activities or how long access at the Administration Building will be restricted.

The march ended at Baldwin Hall, where demonstrators meditated in the parking lot that was under construction in 2015 when the remains were found.

Organizers emphasized from the beginning that the protest would be peaceful. Two police officers watched the rally from outside the Holmes-Hunter Academic Building, the building near the Arch named for Charlayne Hunter and Hamilton Holmes, the two students who integrated UGA in 1961. They followed the marchers at a distance from there to Baldwin Hall, then left.

The protesters are seeking a meeting with Morehead before the fall semester begins to discuss their demands: a faculty proposal to set up a center on campus to study slavery, an apology to the descendants of the individuals whose remains were dug up, scholarships for black Athens high-school students and a $15 minimum wage for UGA employees.

Morehead has responded by defending his decision to reinter the remains at Oconee Hill Cemetery over objections from black community members, and dismissing the protesters as a small group with a personal vendetta that was disrupting work at the Administration Building.

Chuck’s Fish, El Barrio and Pelican’s Are All Open